Renal cell carcinoma (RCC) accounted for 90–95% of neoplasms arising from the kidney and ~3.8% of adult malignancy in 2010 (1). Unfortunately, ~25–30% of patients have metastatic disease at first diagnosis, and >95% of these have multiple metastases (2). An aberrant activation of numerous signal pathways, including EGFR signal, has been recognized as a hallmark of cancer cell survival and progression (3). The studies also have revealed that overexpression of EGFR has been linked to RCC progression (4–6).

Traditional systematic therapies for metastatic RCC tumors include immunotherapy, chemotherapy, and targeted therapy (7,8). However, low response rates have significantly retarded the efforts to improve the prognosis. There are still no effective methods for the treatment of metastatic RCC (9). Thus, searching for novel therapeutic methods or agents is needed for improving the efficacy against metastatic RCC.

Acumulated evidence shows that silibinin, a natural flavonoid antioxidant, isolated from milk thistle (Silybum marianum), exerted pleiotropic anticancer capabilities in different human malignant tumors including prostate, bladder, breast, colon, and oral cancer (10–13). Due to the high efficacy of this drug against cancer as well as its non-toxic characteristics, the use of this drug provide a strong rationale for cancer prevention and adjuvant therapy compare with traditional chemical treatment.

In our previous study, we found that silibinin inhibited cell proliferation in human RCC Caki-1 cells through decreasing EGFR signaling activity (3). In this study on metastasis, we selected three human RCC cell lines that have various levels of EGFR expression as the cell models to investigate the potential role of EGFR signaling cascade in RCC progression and possible inhibitory effect of silibinin on this process. Our results demonstrated that silibinin suppressed RCC cell progression via inhibiting the EGFR signal cascade, and resultant EGFR signal dependent MMP-9 activation in human RCC ACHN, OS-RC-2 and SW839 cell lines, suggesting that silibinin might be a new anti-EGFR drug for metastatic RCC treatment.

Total RNA was isolated with TRIzol reagents (Invitrogen, CA) and quantitated by absorbance at 260 nm. Reverse transcription was performed with 2 μg RNA using Rever-tAid™ First Strand cDNA synthesis kit (MBI Fermentas, Germany) according to the manufacturer’s instructions. Expressions of MMP-9 and MMP-2 mRNAs were measured with quantitative PCR and GAPDH mRNA was used as internal control. The primer sequences are given below: MMP-9 (forward, 5′-TGTCGCTGTCAAAGTTCGAG-3′; reverse, 5′-TTCATCTTCCAAGGCCAATC-3′); MMP-2 (forward, 5′-GGACAGACGGAAGTTCTTGG-3′; reverse, 5′-CACTTTCCTGGGCAACAAAT-3′); GAPDH (forward, 5′-CATACCAGGAAATGAGCTTGACAA-3′; reverse, 5′-CTCCTCCACCTTTGAGGCTG-3′) was used as an internal control. The experiment was performed in 3 individual trials in triplicate.

Cell migration and invasion assays were performed using 24-well transwell plates (Falcon cell culture inserts, 8-μm pore size, BD, NJ) according to the manufacturer’s instructions. Briefly, for the invasion assay, ACHN, OS-RC-2 and SW839 cells (4×104), pretreated with various concentrations of silibinin (25, 50 and 75 μM), with or without EGF treatment (1, 10 and 50 nM) for 24 h, were seeded into the upper chamber that had been precoated for 6 h with 50 μl Matrigel (2 mg/μl, BD) in medium containing no serum. The lower chamber was filled with 600 μl 10% FBS medium. After a 48-h incubation, the penetrated cell will be fixed with 75% ethanol, stained with 1% crystal violet solution (Fisher Scientific, PA, USA), cells number were counted under microscope. For the migration assay, pretreated cells (2×104) were seeded into the uncoated transwell upper chamber, followed by a 24-h incubation, and then the cells in the membrane were fixed and stained similar to the invasion assay. All the invasion and migration assays were performed at least 3 individual experiments in triplicate.

Cell viability test was performed with a tetrazolium based assay (MTT). Cells (1×103) were seeded in a 96-well plate with 50 μl media in triplicate, then treated with indicated doses of silibinin (0, 25, 50 and 75 mM) for 48 h. MTT solution (20 μl) (5 mg/ml, MTT, Sigma, USA) was added to each well and incubated for 2.5 h, and then developed with 200 μl DMSO/well. The absorbance (OD) was detected at the wavelength of 570 nm with microplate autoreader (Bio-Tek Instruments, VT).

All statistical analyses were carried out with SPSS 15.0 (SPSS Inc., Chicago, IL). Quantitative data are presented as mean ± SE, statistical significance among control group and various treated groups were accomplished by ANOVA, p<0.05 was considered as statistically significant. The data are representative of three independent experiments.

Overexpression of EGFR in RCC cells

To evaluate the role of EGFR signaling in RCC progression, EGFR expression in RCC surgical tissue samples (ten sets of primary tumor, metastatic lymph nodes, and adjacent normal kidney tissue) were examined by IHC staining. Intensive positive signal was detected in the membrane and cytoplasm of primary (T) and metastatic tumor tissues (L), whereas weak signals were detected in the normal (N) kidney tissue (Fig. 1A). Significant higher expression of EGFR was observed in metastatic tumors compared to the primary tumors (p<0.05) and normal tissues (p<0.01). We further investigated EGFR expressions in several selected RCC cell lines and found that the ACHN cells derived from metastatic RCC displayed higher EGFR expression than the other two RCC cells (Fig. 1C), OS-RC-2 and SW839, which were derived from the primary RCC. These three cell lines were used in experiments in further in vitro studies.

Interestingly, our data showed that silibinin abolished EGFR-induced MMP-9 activity similar to the effect shown by the EGFR inhibitor, PD168393, and the ERK inhibitor, U0126, in the EGFR high expressing ACHN and OS-RC-2 cells, not in the EGFR low expressing SW839 cells (Fig. 5C). These results suggest that silibinin blocked the EGFR and its downstream ERK signals, which in turn, inhibited expression and activity of MMP-9, especially in EGFR high expressing cells.

Since the EGFR-signal significantly increased MMP-9 mRNA expression and activity, not MMP-2, we further investigated whether MMP-9 plays a role in RCC migration and invasion induced by EGFR signaling. The ACHN, OS-RC-2 and SW839 cell were stimulated with EGF, and then treated with inhibitors of MMP-2 and MMP-9, or silibinin for 24 h, and the activities of MMP-2 and MMP-9 were tested by zymography. Silibinin and MMP-9 inhibitor both showed inhibition of EGFR signal-induced MMP-9 activity, cell migration and invasion abilities in EGFR high expressing ACHN and OS-RC-2 cells (Fig. 6A), but the MMP-2 inhibitor did not. These results confirmed that MMP-9 is the key molecule to mediate EGFR signal-induced RCC progression (Fig. 6B).

Collectively, it can be concluded that silibinin inhibited EGFR signal-induced invasion and migration of RCC cells via blocking of EGFR/MMP-9 signaling and it suggests the possibility of using silibinin as a new anti-EGFR drug to treat metastatic RCC.

In the present study, we first demonstrated the effects of silibinin on progression of RCC cells induced by EGFR signal in vitro. Employing three different human RCC cell lines, ACHN, OS-RC-2 and SW839, with various levels of EGFR expression, we demonstrated that, silibinin, a natural flavonoid antioxidant isolated from milk thistle, could inhibit EGFR signaling-induced migration and invasion of RCC cells via suppressing EGFR/MMP-9 signaling.

The potential agents for treatment of advanced RCC through targeting EGFR signaling have been studied (15,16). The antibodies and small molecule inhibitors that targets EGFR pathway have entered clinical trials of RCC patients (17,18).

Silibinin has been demonstrated to exert its anticancer effects by targeting EGFR. It was reported that silibinin inhibited ligand binding to EGFR and its internalization into the cytoplasm, EGFR dimerization, ERK1/2 activation, as well as cell proliferation in advanced human prostate carcinoma cells (19). Moreover, silibinin was reported to be effective in decreasing TGF-α and impaired TGF-α-EGFR-ERK1/2 signaling in both androgen-dependent (LNCaP) and -independent (DU145) advanced human prostate carcinoma cells (20). Consistent with these findings, we observed that silibinin inhibited EGFR and ERK1/2 phosphorylation, as well as cell proliferation of human RCC Caki1 cells.

Besides its antiproliferative effect, silibinin also show anti-metastatic effects on a variety of malignant tumors including prostate cancer, lung cancer, breast cancer, osteosarcoma and oral cancer (11–13,21,22). Still little is known about suppression effect of silibinin on EGFR signal-induced RCC migration and invasion. Chang et al(23) reported that silibinin inhibited migration and invasion of RCC 786-O cells. However, RCC 786-O cell line was derived from a primary clear cell adenocarcinoma, which represents a cell type with less invasive potential. In this study, we employed three different human RCC cell lines derived from both primary and metastatic tumor that express various levels of EGFR. We demonstrated that, silibinin could inhibit the migration and invasion of RCC cells induced by EGFR signaling via blocking of EGFR/MMP-9 signaling. However, two other EGFR signaling downstream proteins, STAT3 and AKT, were not affected by silibinin, which is in agreement with previous results that silibinin inhibited cell migration and invasion through ERK1/2 signal, not AKT and STAT3 phosphorylation (12,22,23). 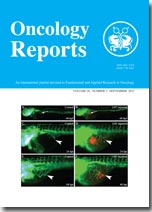