microRNAs (miRNAs) are a class of non-coding small RNAs that bind to target mRNAs, usually resulting in post-transcriptional repression by translational inhibition or target degradation. mRNAs can function as tumor suppressors or oncogenes (also referred to as oncomirs) in human tumors. Although aberrant expression of miR-335 has been reported in ovarian cancer, whether it is an active participant or a mere bystander remains unknown. To clarify its role in ovarian carcinogenesis, we first examined the relative expression of miR-335 in 17 normal ovarian tissues and 4 ovarian cancer cell lines using qPCR. We found that miR-335 was downregulated in the ovarian cancer cell lines relative to normal ovarian epithelium tissues. In vitro, overexpression of miR-335 suppressed cell migration and invasion and resulted in depolymerization of F-actin in ovarian cancer cell lines, but exhibited a negligible effect on cell proliferation. B-cell CLL/lymphoma 2 like 2 (Bcl-w or BCL2L2), a pro-survival member of the Bcl-2 protein family, was identified as a potential target of miR-335 according to the results of bioinformatic analysis, and the expression of Bcl-w and its effector matrix metalloproteinase-2 (MMP‑2) was downregulated after transfection with miR-335 mimics. In addition, ectopic Bcl-w could almost fully nullify the effect of miR-335 overexpression on ovarian cancer cell migration and invasion. These findings indicate that the tiny genome product, miR-335, whose lack of expression brings about the abnormal accumulation of Bcl-w and subsequent unchecked cell invasion in ovarian cancer, may help us to understand one of the many steps ovarian cells take on their way toward the acquisition of malignant phenotypes and miR-335 may be a promising predictor of survival.

Due to the insidious nature of ovarian cancer, few patients can be diagnosed before the cancer has spread beyond the ovaries, making ovarian cancer the most lethal gynecological malignancy and the fifth leading cause of cancer-related mortality in women worldwide (1,2). Yet, our understanding of the molecular mechanisms that govern its dissemination remains fragmental.

microRNAs (miRNAs) are small, non-coding RNAs with a length of ~22 nucleotides, which negatively regulate gene expression by promoting mRNA cleavage or by translational suppression (3). miR-335 has been found to function as an oncogene or tumor-suppressor in a wide variety of cancers (4). It functions as a tumor-suppressor in breast cancer and inhibits metastasis and migration of breast cancer cells (5). Similarly, miR-335 was found to suppress gastric cancer metastasis in vitro and in vivo(6). Lynch et al(7) also found that miR-335 inhibits the invasive and migratory potential of neuroblastoma cells. Interestingly, miR-335 has been reported to be upregulated in glioma (8), as a putative miRNA oncogene in conferring tumorigenic features such as growth and invasion on malignant astrocytoma cell lines in vitro and could be potently required for differentiation of malignant glioma cell lines (9). These findings suggest that the roles of miR-335 vary based on the type of cancer. It will be necessary to determine the expression status of miR-335 in each type of tumor.

Previous profiling studies have associated miR-335 with ovarian cancer (10–12). However, its expression and biological function in ovarian cancer remain unexplored. A search for miR-335 regulatory targets that may be involved in the progression of ovarian cancer using online prediction algorithms has identified Bcl-w, which harbors a putative miR-335 binding site in its 3′-UTR. Bcl-w is an anti-apoptotic member of the Bcl-2 protein family. It is upregulated in tumors such as gastric, colorectal, cervical and breast cancer (13–15). It can promote cell invasion in gastric cancer (13) and inhibit apoptosis in human colorectal cancers (16). These results suggest that the dependency of cancer cells on overexpressed or activated Bcl-w for various tumor-promoting phenotypes, such as sustained survival, proliferation, invasion and metastasis, may be different among tissues or cell types. In this study, we demonstrated that miR-335 may act as a metastasis suppressor in ovarian cancer by targeting Bcl-w and MMP-2.

Samples of human normal ovarian tissues were obtained from patients who underwent surgery at Wuhan Union Hospital from 2004 to 2009. The normal tissues were obtained from patients who underwent wedge biopsy of the ovaries, or adnexectomy due to myoma or adenomyosis. After ovary removal, the germinal epithelium was peeled off and subjected to further analysis. After this, 17 normal ovarian tissues were analyzed. Specimen collection and archiving of patient data were performed upon written informed consent and were approved by the ethics committee of the hospital.

Total RNA was extracted with TRIzol reagent (Invitrogen Life Technologies). The expression level of miR-335 was analyzed using the Hairpin-it™ miRNAs qPCR Quantitation kit (GenePharma, Co. Ltd.), following the manufacturer’s instructions. U6 was used as the reference gene for normalization.

For determination of Bcl-w expression levels, reverse transcription was run using RevertAid™ First Strand cDNA synthesis kit (MBI Fermentas, Flamborough, ON, Canada) according to the supplied protocol. The 25 μl polymerase chain reaction (PCR) mixture included 2X SYBR-Green qPCR master mix (Toyobo, Japan), 2.5 μl of cDNA template and 0.3 μM of each primer. Primers for Bcl-w were as follows: forward, 5′-GAGCCATATAGTTCCTTGGGA-3′ and reverse, 5′-TAGAATAAGTGGGGAGTGGGA-3; and for β-actin, forward, 5′-GCCAACACAGTGCTGTCTGG-3′ and reverse, 5′-GCTCAGGAGGAGCAATGATCTTG-3′. β-actin was used as a reference gene for normalization. The expression of each gene was defined from the threshold cycle (Ct), and relative expression levels were calculated using the 2−ΔΔCT method. All reactions were run in triplicate.

Cell proliferation was measured by detecting incorporation of 5-ethynyl-2′-deoxyuridine (EdU) during DNA synthesis using Clik-iT® EdU Imaging kit (Invitrogen Life Technologies) with minor modifications to the manufacturer’s protocol. Briefly, cells that had been propagated in a 96-well plate for 48 h were exposed to 10 μM of EdU for 4 h. After EdU exposure, cells were fixed with 4% formaldehyde and treated with 0.5% Triton X-100. Proliferative cells were visualized using Click-iT® reaction cocktail. Subsequently, cells were counterstained with Hoechst 33342. All assays were carried out in triplicate.

SKOV3 cells were transfected with miR-335 mimics or the miR-control, as described above, and plated onto uncoated glass coverslips in a 12-well plate. The cells were fixed with 4% formaldehyde, permeabilized in 0.1% Triton X-100 and reacted with phallotoxins (Invitrogen Life Technologies) for 60 min. Subsequently, cell nuclei were counterstained with Hoechst 33342. Images were acquired using an 1X71 digital camera (Olympus, Tokyo, Japan).

Data are presented as means ± SD from at least 3 separate experiments. Unless otherwise noted, one-way ANOVA was used for comparisons between groups. All statistical analyses were carried out with SPSS 12.0 computer software (SPSS, Inc., Chicago, IL, USA). P<0.05 was considered to indicate a statistically significant result.

To determine whether miR-335 plays a role in the tumorigenesis of epithelial ovarian cancer, we examined its expression in 17 normal ovarian tissue samples using stem-loop quantitative reverse transcription-polymerase chain reaction (RT-PCR). We found that miR-335 expression was reduced in ovarian cancer cell lines in comparison with normal ovarian epithelium (Fig. 1).

Given that miR-335 is downregulated in ovarian cancer cell lines, we proceeded to explore its impact on relevant biological behavior of ovarian cancer. Since the expression of miR-335 was most significantly reduced in the SKOV3 and ES2 cell lines, we chose these for further study. Thus, we overexpressed miR-335 in SKOV3 and ES2 cell lines by transiently transfecting them with hsa-miR-335 mimics. Ectopic miR-335 did not affect cell proliferation in vitro (Fig. 2A and B), but did reduce the migratory and invasive ability of SKOV3 and ES2 cells (Fig. 2C and D). The effect of miR-335 overexpression on cell migration was further supported by the wound-healing assay (Fig. 2E). Moreover, under a florescence microscope, numerous F-actin bundles were clearly visible in SKOV3 cells transfected with the miR-335 mimics, while control cells contained markedly fewer, finer and shorter bundles and exhibited an elongated morphology with lamellipodia (Fig. 2F), suggesting miR-335 exerts anti-migratory activity in ovarian cancer cells at least partly by inhibiting actin polymerization.

For miRNA target gene prediction, we used TargetScan release 5.1 online software (http://www.targetscan.org/, Whitehead Institute for Biomedical Research, Cambridge, MA, USA). Among a total of 146 genes that was potentially targeted by miR-335, we found that Bcl-w may contribute to the metastasis of ovarian cancer. To establish that miR-335 targets Bcl-w in ovarian cancer, we overexpressed miR-335 in SKOV3 and ES2 cells. We found that ectopic miR-335 significantly repressed Bcl-w protein levels while no difference was detected between the miR-control and untreated cells. Moreover, a concomitant repression of the Bcl-w effector, MMP-2, was also observed (Fig. 3A and B). These observations demonstrated that miR-335 targets Bcl-w in ovarian cancer. In spite of these findings, no reduction in Bcl-w was observed at the mRNA level when miR-335 was modulated in SKOV3 and ES2 cells (Fig. 3C and D).

To establish that the ability of miR-335 to impede cell invasion is mainly mediated by the downregulation of Bcl-w, we concomitantly transfected SKOV3 and ES2 cells with 335 mimics and Bcl-w expression constructs. In these cells, ectopic Bcl-w reversed the miR-335-imposed invasion defects (Fig. 4C and D). Under the same conditions, we observed a significant increase in MMP-2 (Fig. 4A and B).

miRNAs can modulate a wide variety of biological processes. In the present report, we demonstrated that a single human miRNA, miR-335, is endowed with the ability to repress the pro-metastatic target, Bcl-w, and thereby to inhibit invasion in ovarian cancer.

To date, only a limited number of miRNAs with pro-metastatic or anti-metastatic functions have been identified in ovarian cancer (19–23), miR-34 has been reported to be endowed with the ability to mitigate invasion (19). miR-21 has been categorized as a pro-metastatic gene (22). However, its specific contributions to metastasis are not easily discerned as they have significant effects on cell proliferation at the same time. In contrast, miR-335 obstructs invasion without exerting confounding influences on cell proliferation. As such, it may aptly be categorized as an ‘exclusive invasion suppressor’.

Bcl-w is an anti-apoptotic member of the Bcl-2 protein family. It suppresses apoptosis by direct interaction with pro-apoptotic members and by blocking their apoptotic activities (24–27), and previous evidence suggests that the expression of Bcl-w is associated with infiltrative morphotypes (14). Recently, reporter gene assays have validated its role as an effector of miR-335 (6). Although mutations in the anti-apoptotic Bcl-2 family members (Bcl-xL, Mcl-1, Bcl-w and A1) have not been identified as a cause of tumors, high expression of these proteins can contribute to carcinogenesis in cooperation with other proto-oncogenes (28). Bcl-w can promote cell invasion by activating the PI3K-Akt-Sp1-MMP-2 pathway (13) and blocking the invasion suppression action of Bax (29). In our research, we demonstrated that miR-335 supressed the invasiveness of ovarian cancer by targeting Bcl-w and Bcl-w effector, MMP-2.

miRNAs effect gene silencing via both translational repression or mRNA degradation pathways. When an miRNA and its cognate mRNA interact with perfect complementarity, the target mRNA is directly cleaved, resulting in the reduction in the abundance of the target mRNA. However, in animals, miRNAs generally interact with target mRNAs with only partial complementarity. This mode of recognition results in translational repression of the target mRNA with much smaller effects on the level of target mRNA abundance (6,12,15,30). In our study, it was found that ectopic miR-335 significantly reduced Bcl-w expression at the protein level. However, no corresponding decrease in Bcl-w expression was observed at the mRNA level. In fact, such a finding is not unprecedented (19) and is consistent with the notion that mammalian cells favor translational repression.

In summary, our results suggest that decreased miR-335 facilitates ovarian cancer invasion via the Bcl-w pathway. To our knowledge, this represents the first observation of reduced miR-335 expression in human ovarian cancer. Moreover, as metastases are responsible for patient mortality in ovarian cancer, the ability of miR-335 to impede invasion may prove to be clinically useful.

We thank the Department of Obstetrics and Gynecology, Union Hospital, Wuhan, Hubei, China, for providing the tissue samples. This study was supported by the Scientific Research Foundation for the Returned Overseas Chinese Scholars, the State Education Ministry. 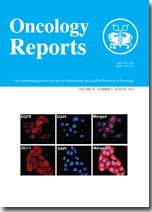