Quaking (QKI) is a KH-type RNA-binding protein encoded by the quaking (qk) locus (1). There are three isoforms of QKI, namely QKI-5, QKI-6 and QKI-7 (2,3). QKI-5 is the only nuclear isoform and shuttles between the nucleus and the cytoplasm, whereas QKI-6 and QKI-7 are localized in the cytoplasm (4,5).

As an RNA-binding protein, QKI post-transcriptionally regulates the mRNA stability, translation efficiency or RNA transportation of target genes via specifically binding to the cis-elements within the 3′-untranslated region (3′UTR) (6–10). Among these targets, MAG and MBP, which are essential for postnatal myelination are well characterized. Overexpression of QKI-5 caused MBP mRNA retention in the nucleus, resulting in a reduction in its protein level and defects in myelination development (10,11).

In adult mammals, qki mRNAs can be detected in tissues, such as the heart, skeletal, lung, testes and immune cells in addition to the central nervous system (CNS) (9,12–15). In a search for putative RNA targets recognized by QKI, a bipartite consensus sequence ACUAAY-N(1–20)-UAAY was defined as a QKI response element (QRE), and 1,430 putative mRNA targets were identified by bioinformatic analysis (16). Thirteen percent were found to be associated with cell proliferation and cell cycle regulation. Among them, forkhead box O1 (FOXO1) appeared to be an appealing candidate due to its potent roles in regulating the cell cycle, apoptosis, stem cells and the aging process (17–23). Low and even undetectable FOXO1 expression has been observed in prostate, breast and colon cancers, suggesting its tumor-suppressor role (24–29). Nevertheless, the molecular mechanism for the aberrant expression of FOXO1 in those cancers remains to be elucidated.

In the present study, we provide initial evidence showing that QKI-5 repressed FOXO1 expression via decreasing its mRNA stability. ATRA and 5-FU increased FOXO1 expression at the post-transcriptional level through inhibition of QKI. Based on the findings, we suggest that targeting QKI may provide a new insight into novel therapies for the treatment of breast cancers.

Recombinant adenoviruses expressing flag-tagged QKI-5 were generated using the AdEasy system (MP Biomedicals, Inc., Solon, OH, USA) according to the manufacturer’s instructions. MCF-7 cells were infected with the adenovirus-expressing vectors for 2 h and subsequently cultured for 24 h before being harvested.

To detect the interaction between FOXO1 3′UTR and QKI-5, HEK-293 cells were seeded in 24-well plates and transfected with 400 ng of pGL3-F or pGL3-FM in combination with increased doses of pcDNA3.1-QKI-5, respectively. Cells were cotransfected with 50 ng of pBIND (a plasmid constitutively expressing Renilla luciferase) to normalize for the transfection efficiency. After 24 h of transfection, cells were lysed using passive lysis buffer and analyzed for firefly and Renilla luciferase activities using the Dual-Luciferase Reagent Assay kit (Promega, Madison, WI, USA) according to the manufacturer’s instructions.

MCF-7 cells were seeded in 100-mm dishes and transfected with recombinant adenoviruses expressing flag-tagged QKI-5 for 24 h. After protein-RNA crosslinking with 1% formaldehyde, cells were lysed in a buffer containing 10 mM HEPES (pH 7.9), 1.5 mM MgCl2, 10 mM KCl, 0.5 mM DTT, 0.1% NP-40, 50 mM NaF, 10 mM Na3VO4, 10 mM sodium pyrophosphate, 50 mM disodium glycerol phosphate, 10 nM okadaic acid, 0.2% VRC, 100 U/ml RNasin and 1/25 v/v Complete EDTA-free protease inhibitor cocktail. The lysed cells were centrifuged at 12,000 × g for 10 min at 4°C. The supernatants were pre-cleaned for 60 min at 4°C by using 5 μl of Protein-A Sepharose beads (BD Biosciences, San Jose, CA, USA). After centrifugation, the supernatant was incubated with 30 μg of unrelated antibody (IgG, Sigma) or anti-flag at 4°C for 60 min. After incubation, 5 μl of protein-A Sepharose beads was added to all tubes and incubated for a further 60 min at 4°C. The tubes were centrifuged at 12,000 × g for 5 min, and the precipitated beads were washed with lysis buffer three times. The RNA in the immunoprecipitated complex and the RNA in the previously saved input fraction were released by reversing the cross-linking at 65°C for 2 h with 200 mM NaCl and 20 μg of proteinase K. The RNA was extracted as described above. Specific primers used to detect the presence of FOXO1 mRNAs were synthesized as follows: sense 5′-ttgttacatagtcagcttg-3′ and antisense 5′-tcactttcctgcccaaccag-3′. PCR conditions were: 95°C for 5 min followed by 25 cycles of 95°C for 15 sec, 55°C for 20 sec, and 72°C for 1 min. All experiments described in this study were performed in triplicate.

Data are expressed as mean ± SD from three independent experiments. Statistical analysis was performed using Student’s t test to assess the differences between the experimental groups. p<0.05 was considered to indicate a statistically significant result.

FOXO1 as a potential target of QKI

Due to limited information concerning the function of QKI-5 outside the CNS system, seeking for and verifying potential target genes may be an efficient way to research the function of QKI-5. We selected multiple potential targets of QKI, which are closely related to cell cycle regulation, from the 1430 target genes identified by Galarneau and Richard (16). Among them, FOXO1 was found to be the most significant.

Bioinformatics analysis revealed that FOXO1 3′UTR contained three conserved QREs (Fig. 1A). To test whether FOXO1 is a target of QKI, two constructs with FOXO1 3′UTR downstream of firefly luciferase in the pGL3 vector were included. pGL3-F harbored the wild-type QRE while mutant FOXO1 3′UTR (pGL3-FM) had none of the three QREs. As shown in Fig. 1B, the luciferase activities of pGL3-F were gradually reduced by QKI in a dose-dependent manner, whereas that of GL3-FM was rarely changed by QKI. On the basis of the above observations, we hypothesized that QKI may mediate a negative regulation of FOXO1.

In order to detect the in vivo interaction between QKI and FOXO1 3′UTR, an RNA co-immunoprecipitation experiment was performed. MCF-7 cells were transfected with pcDNA3.1(+)-flag-QKI for 24 h, and total cellular extracts were then incubated with either an anti-flag or a nonspecific antibody (IgG). By RT-PCR analysis, only the anti-Flag immunoprecipitate contained FOXO1 RNA whereas the one with non-specific IgG did not (Fig. 1C).

To verify the negative regulation of FOXO1 by QKI, small interfering RNA-mediated specific knockdown of QKI increased the mRNA and protein levels of FOXO1, whereas overexpression of QKI inhibited FOXO1 expression (Fig. 1D).

As QKI reduced FOXO1 mRNA level to a great extent, it is reasonable to deduce that QKI, as an RNA binding protein, may regulate the mRNA stability of FOXO1. To test this, actinomycin D, a transcription inhibitor, was used to block the transcription initiation in cells transfected with negative control (siCon) and QKI siRNA (siQKI). Cells were harvested at different time points, and real-time PCR was employed to determine the decaying rate of FOXO1 mRNA. As shown in Fig. 2, the half-life of FOXO1 mRNA was 3.02 h in siCon cells, whereas it was prolonged to 6 h in siQKI cells. These data suggest that QKI destabilizes FOXO1 mRNA.

To ascertain whether the post-transcriptional regulation of FOXO1 by QKI is not ATRA-specific, MCF-7 and MDA-MB-231 cells were treated with 5-FU. As shown in Fig. 5A and C, 5-FU induced FOXO1 expression whereas it inhibited QKI expression in both cell lines. Moreover, knockdown of QKI dramatically increased the luciferase activities of FOXO1 3′UTR upon 5-FU treatment (Fig. 5B and D), indicating that 5-FU enhances FOXO1 expression at the post-transcriptional level through inhibition of QKI expression.

Previous studies have shown that QKI is an RNA-binding protein known to be important for myelination in the central nervous system (CNS) and peripheral nervous system, through regulating mRNA stability, translation, splicing and cytoplasmic/nuclear localization of target genes (1,4,6,8,10,13,38). In addition, QKI was previously found to bind p53 3′UTR and inhibit its translation (39). Due to the limited information concerning QKI-5 function outside the CNS system, seeking for and verifying potential target genes may be an efficient way to elucidate the function of QKI-5.

FOXO1 was an appealing candidate among thousands of targets due to its diverse roles in controlling cell cycle, apoptosis, stem cells and the aging process (17–23,27). Previous studies found that FOXO1 function was closely related with its phosphorylation and acetylation modification which determined its transcriptional activity (40–44). Recent studies found that microRNAs, such as miR-96 and miR-370, downregulated FOXO1 expression (28,29). Our current data demonstrated that QKI, an RNA-binding protein, repressed the expression of FOXO1 via decreasing its mRNA stability (Figs. 1 and 2). Our study, for the first time, elucidated the detailed molecular mechanism by which FOXO1 mRNA was regulated at the post-transcriptional level.

FOXO1 is a critical tumor suppressor, and its expression is often dysregulated in cancers, such as breast, bladder, prostate and endometrial cancers (24–29). Our study observed that QKI and FOXO1 were inversely expressed in breast cancer cells, and the low expression level of FOXO1 mRNA could be enhanced by knockdown of QKI (Figs. 1D and 3), elucidating a novel mechanism of how FOXO1 is aberrantly expressed in breast cancer. As a critical transcription factor, FOXO1 orchestratedly regulates genes involved in cell proliferation, apoptotic response, cell cycle checkpoints and cellular metabolism (17,21,23). We hypothesized that a low level of FOXO1 expression may make these cancers resistant to apoptosis- or differentiation-inducing agents. Of note, ATRA and 5-FU significantly induced an increase in FOXO1 expression through inhibition of QKI (Figs. 4 and 5). Our further study will disclose whether QKI-mediated post-transcription repression of FOXO1 is involved in ATRA or 5-FU-mediated effects and knockdown of QKI indeed sensitizes breast cancer cells to those agents.

In contrast to our previous research in which QKI functioned as a tumor suppressor in colonic epithelial cells and gastric cancer (45,46), the present study suggests that QKI may function as an oncogene in breast cancer. The reason for this discrepancy may be due to the cell-context dependent role of QKI. As we know, QKI is an RNA-binding protein belonging to the STAR family, and its function is dependent on the accessibility of its targets and the cellular environment. Thus, it is reasonable to suggest that QKI functions differently in different cells.

In summary, our study provides initial evidence that dysregulation of FOXO1 by QKI via post-transcriptional inhibition may be one of the factors contributing to the oncogenesis and progression of breast carcinoma. Thus, targeting QKI may serve as a novel strategy to sensitize breast cancers to chemotherapy and/or radiotherapy. 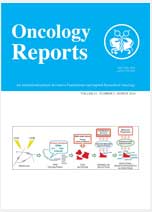