Livistona chinensis seeds have been used for centuries to clinically treat various types of cancer. Our published data suggest that Livistona chinensis seeds are able to inhibit hepatocellular carcinoma (HCC) growth in vitro and in vivo via promotion of mitochondrial-dependent apoptosis. To further elucidate the molecular mechanisms of its antitumor activity, in the present study, we used an HCC xenograft mouse model to evaluate the effect of an ethanol extract of Livistona chinensis seeds (EELC) on tumor angiogenesis and on the activation of the Notch pathway. Intratumoral microvessel density (MVD) in HCC xenograft mouse tumors was evaluated via immunohistochemical (IHC) staining for CD31. The mRNA and protein expression of vascular endothelial growth factor A (VEGF-A), VEGFR-2, Notch, Dll4 and Jagged1 was evaluated using RT-PCR and IHC, respectively. We found that EELC profoundly reduced MVD in the HCC mouse tumors, demonstrating the in vivo inhibitory effect of EELC on tumor angiogenesis. In addition, EELC treatment reduced the expression of VEGF-A and VEGFR-2 in tumor tissues. Furthermore, EELC treatment inhibited the expression of Notch, Dll4 and Jagged1. Our findings suggest that Livistona chinensis seeds inhibit tumor angiogenesis through suppression of the Notch pathway.

Hepatocellular carcinoma (HCC) is one of the leading causes of cancer-related deaths worldwide (1). Although surgical treatment and non-surgical therapeutic modalities such as radiotherapy, chemotherapy and interventional therapy have been employed, the prognosis of HCC patients remains discouraging due to the high recurrence rate and frequent incidence of intrahepatic metastasis (2,3). Angiogenesis is essential for continuous tumor growth and provides an avenue for hematogenous metastasis (4–9). Tumor angiogenesis is strongly regulated by multiple intracellular signaling transduction cascades such as the Notch pathway (10,11). The activation of Notch signaling is initiated by the binding of transmembrane Notch proteins (Notch1, Notch2, Notch3 and Notch4) to their specific membrane-bound ligands (Jagged1, Jagged2 and Delta-likes Dll1, Dll3 and Dll4). Mounting evidence shows that perturbation of the Notch pathway often leads to tumorigenesis (12–16), and the potential role of Notch signaling in the development of HCC designates Notch and its ligands as promising targets for HCC therapy (17–20).

Natural products, including traditional Chinese medicines (TCMs), have been used clinically for thousands of years as important alternative remedies for a variety of diseases including cancer (21–23). Therefore, interest in the use of natural products as therapeutic agents for cancer has recently increased. Livistona chinensis, belonging to the monocotyledonous Palmaceae family, is a medicinal herb widely distributed in Eastern Asia. The seeds of Livistona chinensis have long been used in China to clinically treat various types of cancer (24–27). Our previous findings suggest that Livistona chinensis seeds may be effective in cancer treatment via promoting mitochondrial-dependent apoptosis in vivo and in vitro (28). To further elucidate the molecular mechanisms of its antitumor activity, in the present study, we used a HCC xenograft mouse model to evaluate the effect of an ethanol extract of Livistonae chinensis seeds (EELC) on tumor angiogenesis and on the activation of the Notch pathway.

Livistona chinensis (500 g) seeds were extracted with 5,000 ml of 85% ethanol using a refluxing method and were filtered. The resultant solution was concentrated to a relative density of 1.05, and the dried powder of EELC was obtained by spraying desiccation method using a spray dryer (Model B-290; Buchi, Switzerland). For animal experiments, the powder of EELC was dissolved in saline to a working concentration of 300 mg/ml.

Human HCC HepG2 cells were obtained from the Cell Bank of the Chinese Academy of Sciences (Shanghai, China). The cells were cultured in DMEM containing 10% (v/v) FBS, and 100 U/ml penicillin and 100 μg/ml streptomycin in a 37°C humidified incubator with 5% CO2. The cells were subcultured at 80–90% confluency.

Male BALB/c athymic (nude) mice (with an initial body weight of 20–22 g) were obtained from Shanghai SLAC Laboratory Animal Co., Ltd. (Shanghai, China) and housed under pathogen-free conditions with controlled temperature (22°C), humidity, and a 12 h light/dark cycle. Food and water were given ad libitum throughout the experiment. All animal treatments were strictly performed in accordance with international ethical guidelines and the National Institutes of Health Guide Concerning the Care and Use of Laboratory Animals. The experiments were approved by the Institutional Animal Care and Use Committee of Fujian University of Traditional Chinese Medicine.

HepG2 (4×106) cells mixed with Matrigel (1:1) were subcutaneously injected into the right flank of mice to initiate tumor growth. After 7 days of xenograft implantation when tumor size reached ~3 mm in diameter, mice were randomized into two groups (n=10) and given an intragastric administration of 3 g/kg of EELC or saline daily, 5 days a week for 21 days. At the end of the experiment, the animals were anaesthetized with pelltobarbitalum natricum, and the tumor tissue was removed. A portion of each tumor was fixed in 10% buffered formalin, and the remaining tissue was snap-frozen in liquid nitrogen and stored at −80°C.

After being fixed with 10% formaldehyde for 12 h, tumor samples were processed conventionally for paraffin-embedded tumor slides. The slides were subjected to antigen retrieval and the endogenous peroxidase activity was quenched with hydrogen peroxide. After blocking non-specific proteins with normal serum in phosphate-buffered saline (PBS) (0.1% Tween-20), slides were incubated with rabbit polyclonal antibodies against CD31, VEGF-A, VEGFR-2, Notch, Dll4 and Jagged1 (all in a 1:100 dilution). After washing with PBS, slides were incubated with the biotinylated secondary antibody followed by conjugated horseradish peroxidase (HRP)-labeled streptavidin (Dako), and then washed with PBS. The slides were then incubated with diaminobenzidine (DAB) as the chromogen, followed by counterstaining with diluted Harris’ hematoxylin (both from Sigma). After staining, five high-power fields (x400) were randomly selected in each slide, and the average proportion of positive cells in each field was counted using the true color multi-functional cell image analysis management system (Image-Pro Plus; Media Cybernetics, Bethesda, MD, USA). To rule out any non-specific staining, PBS was used to replace the primary antibody as a negative control.

Data are presented as means ± SD for the indicated number of independently performed experiments, and the data were analyzed using the SPSS Package for Windows (version 11.5). Statistical analysis of the data was performed with the Student’s t-test. Differences with p<0.05 were considered to be statistically significant.

To determine the effect of EELC on tumor angiogenesis, we performed immunohistochemical (IHC) staining for the endothelial cell-specific marker CD31 to examine the intratumoral microvessel density (MVD) of HCC xenograft mouse tumors following EELC treatment. As shown in Fig. 1, the percentage of CD31-positive cells in the control and EELC-treated mice was 36.3±5.21 and 20.41±3.87%, respectively (p<0.05), demonstrating the in vivo inhibitory effect of EELC on tumor angiogenesis.

To further investigate the mechanism of anti-angiogenic activity of EELC, we evaluated its effect on the Notch pathway by examining the expression of several key mediators of this signaling. As shown in Fig. 3A, EELC treatment profoundly reduced the mRNA expression of Notch, Dll4 and Jagged1 in the tumor tissues. Consistently, their protein expression was also significantly inhibited following EELC treatment. The percentage of Notch-, Dll4- and Jagged1-positive cells in the control group was 28.86±5.35, 32.39±4.27 and 27.33±3.58%, whereas that in the EELC-treated mouse tumors was 15.73±4.42, 13.8±2.24 and 12.15±2.11% (Fig. 3B).

Deregulated angiogenesis plays a crucial role in the development of various diseases including cancer (29–31). Induction of angiogenesis is mediated by a variety of molecules released by tumor cells (32). Vascular endothelial growth factor A (VEGF-A) is one of the most effective biologic inducers of angiogenesis (33–35). After secretion VEGF-A, primarily interacts with specific receptors (VEGFR-2) present on the surface of vascular endothelial cells, which in turn triggers a tyrosine kinase signaling cascade, inducing endothelial cell proliferation, migration, survival, sprouting and consequent tube formation (35,38). VEGF-A was found to be highly expressed in a wide variety of human cancers and is associated with cancer progression, invasion and metastasis and poor patient prognosis (37,38). Therefore, it is not surprising that VEGF is considered as an attractive strategic target for inhibiting tumor angiogenesis.

A role for Notch signaling is well documented in both hematological malignancies and in solid tumors. Notch has been demonstrated to act either as a tumor suppressor or as an oncogene in a context-dependent manner (39). In addition, several lines of evidence suggest that Notch also plays an important role in tumor angiogenesis. Tumor vasculature and tumor cells have also been shown to overexpress the Notch ligand Dll4. Genetic studies have shown that reduction in Dll4 results in hypersprouting phenotypes and disruption of the vasculature (40,41). Another Notch ligand Jagged1 expressed in tumor cells has been shown to stimulate Notch-dependent angiogenesis (42,43). These findings suggest that Notch-specific blockade may inhibit tumor growth by disrupting angiogenesis. Therefore, Notch has become a focus for the development of targeted therapeutics in cancer.

Similar to the majority of other medicinal herbs, Livistona chinensis is composed of numerous chemical components such as flavonoids, diterpenoids, alkaloids, steroides and polysaccharides. Herbal medicines including Livistona chinensis are thus considered to be multi-target agents that exert their therapeutic function in a more holistic manner. Our previous findings suggest that Livistona chinensis seeds may be effective in inhibiting HCC xenograft mouse tumor growth, and in promoting cancer cell apoptosis (28). In the present study, we evaluated the effect of EELC on tumor angiogenesis using a xenograft mouse model. Our current data revealed that EELC reduced tumor MVD in HCC mice. In addition, EELC treatment suppressed the expression of VEGF-A and VEGFR-2 in tumor tissues, which in turn resulted in the inhibition of tumor angiogenesis. Furthermore, EELC treatment inhibited the expression of Notch, Dll4 and Jagged1.

In conclusion, our findings suggest that inhibition of tumor angiogenesis via suppression of the Notch pathway may be one of the mechanisms by which Livistona chinensis seeds play an important role in the treatment of cancers. 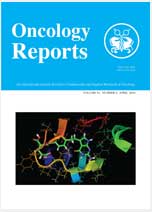