Ki-67 as an independent prognostic factor in an unselected cohort of patients with ovarian cancer: Results of an explorative, retrospective study

Tumor stage, postoperative residual tumor burden, histological type and histological grade are the most important clinical-pathological factors related to the prognosis of patients with epithelial ovarian cancer (EOC) (1). However, patients with comparable risk factors may have different prognoses underlying the need for further prognostic factors (2).

Uncontrolled cellular proliferation is one of the definitive characteristics of malignancies (3). Mitotic count is a traditional and practical method to determine proliferative activity, but is hampered by several conflicting factors (4). Alternatively, immunohistochemical detection of proliferating cells may help to determine the proliferative potential of a tumor. Ki-67 is expressed during all active phases of the cell cycle, and the monoclonal Ki-67 antibody MIB-1 binds to the nuclear Ki-67 antigen (5). Growing evidence underlines that high expression of Ki-67 indicates poor prognosis in several types of cancers (6–9). In EOC, however, Ki-67 has not yet been fully established as a reliable prognostic factor thus showing the need for further investigation.

Nulliparity and infertility as hormonal risk factors have been identified in regards to the development of EOC in epidemiological studies, while pregnancy and oral contraceptives appear to protect from the disease (1). This has led to further investigation of the role of the two steroid hormones estrogen and progesterone and their receptors in EOC (10,11). Even if growing evidence supports the theory that the progesterone receptor (PR) has a favorable impact on the prognosis of EOC in contrast to the estrogen receptor (ER), the available literature is contradictory (11–15).

The invasion in surrounding tissue is another definitive characteristic of malignancies (3). Urokinase-type plasminogen activator (uPA) catalyzes the conversion of plasminogen to plasmin (16). Plasmin leads to the degradation of the extracellular matrix and basement membrane (16). Plasminogen activator inhibitor-1 (PAI-1) inhibits the activation of uPA (17). However, PAI-1 modulates cell migration and induces tumor proliferation by activation of intracellular signal transduction (17). Thereby, uPA and PAI-1 are strongly implicated as a promoter in various solid tumors (16,17). Current literature concerning uPA and PAI-1 in EOC is still controversial (18,19).

In this explorative, retrospective study, we examined possible associations between Ki-67, PR, ER, uPA, PAI-1 and overall survival (OS) and disease-free survival (DFS) in an unselected consecutive cohort of patients with EOC.

We searched the archives for all patients with EOC who underwent primary surgery during the time period of 1997 and 2004. Patients entered the present study when formalin-fixed paraffin-embedded (FFPE) tissue or aliquots of fresh tissue were available. Follow-up was conducted by writing letters to patients or their physicians, phoning them, and by checking the patient records until November of 2012. We documented i) death from EOC or from other reasons unrelated to cancer and ii) recurrence of disease, which included metastasis, local relapse and secondary tumors. Patient charts were reviewed to collect data regarding age at diagnosis, histological type, tumor stage of disease according to the guidelines of the International Federation of Gynecology and Obstetrics (FIGO) and lymph node status. We compared EOC with high-grade serous carcinoma vs. other types in the analysis of histological type. The amount of residual disease after primary surgery was registered as R0, R1 and R2. Completed chemotherapy was defined as 6 courses of platinum-based monotherapy in early EOC or as platinum-based combination with paclitaxel for patients being treated after 2000 or with cyclophosphamide for the rest of the patients. The present study was approved by the Research Ethics Committee of the University Medical Centre Mainz, Germany. Informed consent was obtained from all patients. All specimens were handled according to the ethical and legal standards.

Immunohistochemistry and evaluation of staining of Ki-67, PR and ER

Serial sections of formalin-fixed slices were stained with monoclonal MIB-1 antibodies (clone MIB-1; Dako, Glostrup, Denmark) as previously described (20) (Fig. 1). In accordance with previous reports on Ki-67 staining, overexpression was defined when >20% of the cancer cells were stained (6,21).

Statistical analyses were performed using the SPSS statistical software program, version 21.0 (SPSS Inc., Chicago, IL, USA). Patient characteristics were expressed as absolute and relative numbers or as median with their quartiles. Cut-off optimization was performed for PR and ER using univariable Cox regression analyses. The Cox proportional hazard regression model was used to evaluate the effect of explorative variables on DFS and OS. First, univariable Cox regression analyses were performed for every single variable. Secondly, variables with a p-value <0.05 entered the multivariable Cox regression analysis with a variable selection via backward elimination. All associations were expressed as hazard ratios (HR) with their 95% confidence intervals (CI) and p-values. Kaplan-Meier estimations were performed to describe survival rates. Correlations between the proliferation markers were analyzed with the Spearman’s rank correlation coefficient. As this was an explorative study, no adjustments for multiple testing were carried out. The statistical tests were carried out for illustrative purposes rather than hypothesis testing. p-values were provided for descriptive reasons only and should be interpreted with caution and in connection with effect estimates.

A total of 162 patients were screened. Thirty-four and 18 patients were excluded due to missing tissue samples and inappropriate follow-up information, respectively. Two patients suffered from a borderline tumor. Thereby, 108 patients entered the present study. The median follow-up time was 43.3 (range 11.4–68.0) months. Seventy-nine recurrences and 66 deaths occurred. The characteristics of the patients are presented in Table I.

a Median (quartiles) of uPA and PAI-1.

The present study examined the influence of the expression of Ki-67, PR and ER as well as uPA/PAI-1 on the prognosis of an unselected cohort of 108 patients with EOC utilizing Kaplan-Meier estimations as well as univariable and multivariable Cox regression analyses.

There is a growing body of evidence for a prognostic role of Ki-67 in EOC. In several reports, patients with high Ki-67 were found to have a less favorable 5-year survival (8,25). These patients were also more likely to have other poor prognostic factors, including advanced tumor stage (21,26), higher tumor grade (21,27) and postoperative residual tumor burden (27). However, other studies were not able to show significant associations between Ki-67 and tumor stage (6,28), histological type (21,25,27) and tumor grade (6,28). In the present study, patients with high Ki-67 showed a much shorter OS and DFS compared to EOC cases with low Ki-67 in the univariable and multivariable analyses. The 5-year overall survival rate for patients with a low Ki-67 was more than two times higher when compared to Ki-67-positive tumors. This relation is similar to the findings of other studies (6,21,27,28). However, the high HR of Ki-67 on DFS and OS and their broad 95% CI can be regarded as a result of the small number of events in this relatively small cohort with 108 patients and should thereby be interpreted with caution. In the present study, Ki-67 correlated only weakly with tumor stage and with postoperative residual tumor burden. Surprisingly, no association was detected between Ki-67 and histological grade or other clinicopathological factors. This may be due to the fact, that the predictive value of histological grade was hampered by several conflicting factors such as interobserver variability and the co-existence of different definitions (29). On the other hand, this supports our finding that Ki-67 behaves as an independent prognostic marker in patients with EOC.

The available literature concerning the prognostic impact of PR and ER on the prognosis of EOC is contradictory. Several studies report no association between the expression of PR and the survival of EOC patients (12,13), while other studies report that a higher PR status indicates a favorable prognosis (14,15). This may rely on different analytical methods, cut-off and scoring systems (12,14,15,30). Furthermore, the inclusion criteria of several steroid receptor expression studies for EOC are broad so that even patients with certain histological subtypes, histological grade or tumor stage are included (30,31). However, a meta-analysis conducted by Zhao et al (11) found that higher levels of PR predicted favorable prognosis whereas expression of ER did not influence prognosis. The results from our study are in concordance with these results. In the present study, PR and ER showed a moderate correlation. This finding is in line with in vitro results and clinical results (30,32,33). Furthermore, the expression of PR correlated only weakly with tumor stage or histological grade or histological type or postoperative residual tumor burden supporting the theory that PR represents an independent prognostic marker.

Notably, expression of uPA and PAI-1 was not associated with prognosis or other clinicopathological factors in this cohort of patients. These findings confirm the results of a study by van der Burg et al although uPA and PAI-1 levels were higher in ovarian cancer patients when compared to the levels in benign lesions (18). On the contrary, other studies showed an independent association of the overexpression of uPA and PAI-1 with impaired prognosis in EOC (19,34). However, to the best of our knowledge these results have not yet been validated.

Unfortunately, to date, no meaningful therapeutic benefit results out of the growing, but partially conflicting body of evidence on endocrine regulation and proliferation of EOC. Endocrine therapy, e.g. with the aromatase inhibitor letrozole or with tamoxifen, has shown small clinical benefit only in subgroups of patients with EOC (35,36). Even if it is self-evident that antiproliferative chemotherapy is more effective in tumors which are highly proliferative, possibly due to an increased chemosensitivity, the treatment decision for adjuvant chemotherapy mostly relies on the tumor stage and not on proliferation (37). The decision regarding chemotherapy is influenced by the histological grade only in the early stages. However, to date, no single validated prognostic biomarker is available for patients with EOC. This may depend on the multifarious demands for biomarkers being regarded as valuable prognostic factors. The proposed biomarker should provide specificity, sensitivity and should be prognostic, reproducible, independent and validated. Thereby, the introduction of a new biomarker may facilitate a simpler and more consistent method with which to stratify patients. Possibly, this may improve our understanding of carcinogenesis, tailor adjuvant therapy and improve prognosis. At present, the significant and already established prognostic factors are clinicopathological variables such as postoperative residual tumor burden, tumor stage, histological type, histological grade, completeness of chemotherapy and age.

In conclusion, we demonstrated in an explorative, retrospective study that Ki-67 is an independent prognostic marker for patients with EOC. After cut-off optimization, PR also functioned as an independent prognostic marker. ER, uPA and PAI-1 were not associated with prognosis. Clearly, these findings should be validated in additional prospective studies.

Sections of the results presented in the present study derived from the doctoral thesis of Ms. Nina Mantai. 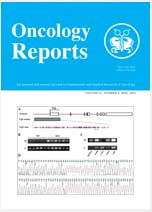