Colon cancer is one of the most common malignant tumors (1–3). Every year, there are >945,000 new cases of colon cancer worldwide, and ~492,000 deaths (1–4). Although there have been numerous improvements in tumor therapy, colon cancer remains one of the leading causes of cancer-associated deaths in the world (1,2). In patients with colon cancer, metastasis is the main cause of mortality (5). It is a huge challenge for both clinicians and researchers to find novel therapeutic approaches for colon cancer (6).

Early growth response gene 1 (Egr-1) is a transcription factor that serves important roles in tumor processes, including cell proliferation, migration, invasion, differentiation and apoptosis (7–10). Egr-1 expression is dysregulated in several types of tumor, such as leukemia (11), pancreatic tumor (12), gastric tumor (9), thyroid tumor (13), liver cancer (14) and glioma (15), and is a positive prognostic factor for the survival of patients with several types of cancer, such as gastric cancer (16); therefore, Egr-1 is suggested to be a new biomarker and a promising therapeutic target (17). However, the function of Egr-1 in the progression of colon cancer is not fully understood.

Cyclin-dependent kinase-like 1 (CDKL1), located on chromosome 14q21.3, is a member of the CDKL kinase family (25,26). CDKL1 expression is upregulated in breast cancer (27), gastric cancer (28), melanoma (29) and colon cancer (30). Moreover, knockdown of CDKL1 in these types of cancer induces apoptosis and/or inhibits cell proliferation, migration and invasion (27–30). Therefore, CDKL1 may serve as a promising therapeutic target; however, the mechanism by which CDKL1 expression is regulated is unknown. To the best of our knowledge, there is no report on the role of CDKL1 in colon cancer progression. Therefore, the present study aimed to investigate whether Egr-1 regulated CDKL1 expression and the role of Egr-1-regulated CDKL1 in colon cancer progression.

The present study aimed to illustrate the function and the underlying mechanism of Egr-1-mediated CDKL1 regulation in colon cancer cell proliferation, migration and invasion, and to verify whether Egr-1/CDKL1 may be promising prognostic biomarkers and therapeutic targets for colon cancer.

The association of Egr-1 expression and the survival of 279 patients with colon adenocarcinoma was analyzed using The Cancer Genome Atlas (TCGA) in the UALCAN website (http://ualcan.path.uab.edu/), which is a comprehensive, user-friendly and interactive web resource for analyzing cancer OMICS data. ‘TCGA Gene Analysis’ was chosen and ‘Egr-1’ was scanned in TCGA dataset of colon adenocarcinoma. Samples were categorized into two groups: High expression (with TPM values above upper quartile) and Low/Medium expression (with TPM values below upper quartile) (31). The survival curve of the effect of Egr-1 expression on the survival of patients with colon adenocarcinoma was then presented. The Kaplan-Meier method was used for survival analysis.

Since colon adenocarcinoma and colon carcinoma are the two main types of colon cancer, the present study used two cell lines, namely SW480 (a colon adenocarcinoma cell line) and HCT-116 (a colon carcinoma cell line). SW480 and HCT-116 cells were purchased from the American Type Culture Collection (ATCC) and were cultured in DMEM containing 10% FBS (both Gibco; Thermo Fisher Scientific, Inc.) at 37°C in an incubator with 5% CO2.

The lentivirus (Lv)-shEgr1 was constructed by Shanghai GeneChem Co., Ltd., using a 3rd generation packing system. A total of 2 µg of the packing vector containing short hairpin RNA with the sequence 5′-GGCATACCAAGATCCACTT-3′ targeting Egr-1 and 4 µg envelope plasmids mix were transfected into 293 cells (ATCC) using Lipofectamine® 2000 reagent (Invitrogen; Thermo Fisher Scientific, Inc.). After the cells were cultured at 37°C for 48 h, the lentivirus particles were collected and concentrated using ultracentrifugation at 100,000 × g at 4°C for 30 min. Egr-1-knockdown was performed by infecting the Lv-shEgr1 at MOI of 10 into SW480 and HCT-116 cells. Briefly, cells were cultured in a 6-well plate, until the confluence of the cells reached 80%. Lv-shEgr1 was added into the medium. After 24 h of transduction, the medium containing Lv-shEgr1 was replaced with a medium without lentivirus and cultured for 48 h at 37°C. Cells infected with Lv-shEgr1 were selected with 10 µg/µl puromycin.

Overexpression of Egr-1 or CDKL1 in colon cancer cells

Lv-oeEgr1 was constructed by Shanghai GeneChem Co., Ltd., using a 3rd generation packing system. A total of 2 µg of the packing vector containing the Egr-1 coding sequence and 4 µg envelope plasmids mix were transfected into 293 cells using Lipofectamine® 2000 reagent (Invitrogen; Thermo Fisher Scientific, Inc.). After the cells were cultured at 37°C for 48 h, the lentivirus particles were collected and concentrated using ultracentrifugation at 100,000 × g at 4°C for 30 min. Overexpression of Egr-1 was performed by infecting the lentivirus Lv-oeEgr1 at MOI of 10 into SW480 and HCT-116 cells. Briefly, cells were cultured in a 6-well plate, until the confluence of the cells reached 80%, Lv-oeEgr1 was added into the medium. After 24 h of transduction, the medium containing Lv-oeEgr1 was replaced with a medium without lentivirus, and cultured for 48 h culture at 37°C. Cells infected with Lv-oeEgr1 were selected with 10 µg/µl puromycin.

Proteins were extracted from SW480 and HCT-116 cells using a RIPA lysis buffer kit (EMD Millipore). The protein concentration was measured using a Pierce Rapid Gold BCA kit (Pierce; Thermo Fisher Scientific, Inc.). A total of 20 µg protein/lane was subjected to 10% SDS-PAGE to separate the proteins according to their molecular weight, and the proteins were then transferred to a nitrocellulose membrane (EMD Millipore). After blocking with 5% skimmed milk at 20°C for 30 min, the membrane was incubated with primary antibody for 16 h at 4°C, followed by incubation with peroxidase-conjugated secondary antibody (1:10,000; cat. no. A0208; Beyotime Institute of Biotechnology) at 20°C for 1 h. The membrane was finally incubated in ECL reagents (EMD Millipore) and visualized using a chemiluminescence imager (Bio-Rad Laboratories, Inc.). The Egr-1 primary antibody was purchased from Cell Signaling Technology, Inc. (cat. no. 4154), while the CDKL1 (cat. no. ab136129) and β-actin (cat. no. ab8227) primary antibodies were purchased from Abcam. All the primary antibodies were diluted at 1:1,000 in 5% skimmed milk.

The human CDKL1 promoter sequence was obtained from GenBank (www.ncbi.nlm.nih.gov/gene/). CDKL1 promoter (−1,500 bp to +100 bp, the translational starting site as +1) was amplified from the genomic DNA of SW480 cells using a high-fidelity DNA polymerase (New England BioLabs, Inc.) using the following conditions: 30 sec denaturation at 95°C, followed by 35 cycles of denaturation at 95°C for 15 sec and annealing and extension at 65°C for 1.5 min. The primers used were as follows: Sense, 5′-CCAAGCTTGTAGAGGAAAGTGCTGACTTT-3′ and antisense, 5′-CCTCGAGGTGTCCCTGTTTCTACATTTGA-3. After PCR amplification, the product was cut with HindIII and XhoI restriction enzymes (New England BioLabs, Inc.) and inserted into the pGL3-Basic plasmid (Promega Corporation) between the HindIII and XhoI sites. The promoter-luciferase reporter was named pGL3-CDKL1.

SW480 or HCT-116 cells transfected with shCon, shEgr-1, oeCon or oeEgr-1 were seeded into a 12-well plate at 20,000 cells/well. After 24 h of culture, the pGL3-CDKL1 plasmid (1 µg) was transfected into cells using Lipofectamine® 2000 reagent (Invitrogen; Thermo Fisher Scientific, Inc.). After another 24 h of culture following transfection, cells were lysed and mixed with the luciferin substrate of a Luciferase Assay System kit (cat. no. E1500; Promega Corporation); luciferase activity was determined with a luminometer (Thermo Fisher Scientific, Inc.).

The ChIP assay was performed using a ChIP assay kit (Beyotime Institute of Biotechnology) following the manufacturer's protocol. Briefly, SW480 or HCT-116 cells were cross-linked by being incubated at 25°C for 10 min in a thermostatic incubator (Thermo Fisher Scientific, Inc.), and then the cross-link was stopped by glycin. The genomic DNA was sheared into fragments of 200–1,000 bp by 300 W ultra-sonication at 4°C for 5 min. A total of 500 µl cell lysate per IP reaction was incubated with 10 µg anti-Egr-1 antibody (cat. no. 4154; Cell Signaling Technology, Inc.) or anti-Flag antibody (cat. no. 14793; Cell Signaling Technology, Inc.) for 16 h at −4°C, followed by incubation with Protein A/G MagBeads (Thermo Fisher Scientific, Inc.) according to the manufacturer's protocol. After the cross-linking was unfastened with 0.2 µM NaCl at 65°C for 6 h, the DNA was subjected to PCR with a Taq DNA Polymerase (Beyotime Institute of Biotechnology) using the following conditions: 30 sec denaturation at 95°C, followed by 35 cycles of denaturation at 95°C for 15 sec, annealing at 55°C for 1 min and extension at 72°C for 1 min. The primers for amplifying the fragments of CDKL1 promoter were: Sense, 5′-GCAAATCTAGCAGGTCTGC-3′ and antisense, 5′-GTTCTAATTTCGGGTCTCA-3′.

For migration, 50,000 cells were seeded into the upper chambers containing serum-free DMEM. The lower reservoir contained DMEM with 15% FBS. After 10 h of culture at 37°C, the cells in the upper chambers were removed, and the cells that crossed the membrane were stained with crystal violet reagent (Beyotime Institute of Biotechnology) at 25°C for 5 min. The stained cells were observed under a light microscope (Olympus Corporation) at ×200 magnification and counted in six randomly selected visual fields.

The invasion assays were performed using the same procedures as the migration assays, except that the upper surface of the membrane was precoated with 20 µg Matrigel (Sigma-Aldrich; Merck KGaA) at 37°C for 2 h and the number of seeded cells was 100,000 cells/chamber.

Cells were seeded into 96-well plates at 5,000 cells/well. After 0, 24 and 48 h of culture at 37°C, 10 µl CCK-8 reagent (Dojindo Molecular Technologies, Inc.) was added into each well, and the plate was incubated at 37°C for 2 h. The absorbance was measured at 450 nm using a microplate reader (Thermo Fisher Scientific, Inc.).

Data were analyzed with SPSS software version 19.0 (IBM Corp.). The log-rank test was used to analyze the association between Egr-1 expression and patient survival. Data of qPCR, Transwell, CCK-8 and luciferase assays were repeated three times and presented as the mean ± SD, and differences were analyzed by one-way ANOVA followed by Tukey's post-hoc test. P<0.05 was considered to indicate a statistically significant difference.

Egr-1-knockdown was achieved by infecting SW480 and HCT-116 cells with shEgr-1 lentivirus or shCon lentivirus used as the negative control. Fig. 2A indicates that after infection, Egr-1 mRNA expression was significantly decreased in both cell lines, indicating that Egr-1 was successfully knocked down. Cells with or without Egr-1-knockdown were subjected to CCK-8 assay. As shown in Fig. 2B and C, knockdown of Egr-1 increased the proliferation of SW480 and HCT-116 cells. Furthermore, cell migration and invasion were measured by Transwell assay. As shown in Fig. 2D, the migratory capacity of both SW480 and HCT-116 cells was significantly improved by Egr-1-knockdown; similarly, the invasive capacity of both cell lines was significantly enhanced (Fig. 2E). These results indicated the inhibitory role of Egr-1 in colon cancer progression.

Egr-1 participates in tumor progression by regulating several targets. For example, Egr-1 suppresses breast cancer cell proliferation via downregulating Cyclin Ds (36). However, the mechanisms by which Egr-1 regulates colon cancer cell progression remain unclear. In the current study, it was revealed that the inhibitory roles of Egr-1 in cell proliferation, migration and invasion were partially abolished by CDKL1, indicating that Egr-1 participates in colon cancer progression via regulating CDKL1.

In conclusion, the present study indicated that Egr-1 bound to the promoter of CDKL1 and inhibited its expression, and correspondingly inhibited colon cancer cell proliferation, migration and invasion. The current study suggested that Egr-1/CDKL1 may be used as promising prognostic biomarkers and therapeutic targets for colon cancer.

The present study was supported by the Natural Science Foundation of Taizhou People's Hospital (grant no. ZL201803).

The datasets generated and/or analyzed during the current study are available in the Figshare repository, https://figshare.com/s/1720cea2192d08d21b5f. 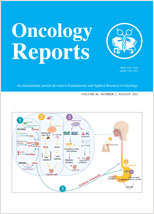