The type I insulin-like growth factor receptor (IGF-1R) signaling pathway is an important growth-regulatory pathway that is prevalent in a variety of cancer types, including human non-small cell lung cancer (NSCLC). To observe the combined effects of gefitinib and AG1024-induced IGF-1R inhibition on the growth of NSCLC, PC9/G cells, a NSCLC cell line with acquired resistance to gefitinib, were treated with AG1024 and gefitinib, alone or in combination. The proliferative activity of PC9/G cells upon different treatments was assessed by CCK-8, and the median-effects principle was used to assess the effect of the combined treatment. Apoptotic rates of the PC9/G cells for the different treatment groups were analyzed by flow cytometry. The expression of phosphorylated epidermal growth factor receptor (p-EGFR), phosphorylated-Akt (p-Akt), and phosphorylated extracellular signal-regulated kinase (p-ERK) in PC9/G cells was examined by Western blotting. PC9/G cells exhibited apoptotic features after treatment with AG1024 and gefitinib alone, and their proliferation rates were inhibited to different degrees. The treatment of AG1024 combined with gefitinib resulted in a synergistic effect in inducing apoptosis, inhibiting cell proliferation and decreasing the expression of p-EGFR, p-Akt and p-ERK. In conclusion, combined inhibition of IGF-1R signaling enhances the anti-proliferative and pro-apoptotic effects of gefitinib in NSCLC gefinitib-resistant cells. Moreover, the addition of an anti-IGF-1R strategy to gefitinib treatment may be more effective than a single-agent approach.

Lung cancer is the leading cause of cancer-related mortality in both men and women (1). Non-small cell lung cancer (NSCLC) represents 80% of lung cancers, and most patients are diagnosed with stage IIIB and IV disease. Five-year survival rates for these patients remain below 10%. Current treatments, including chemotherapy, radiotherapy and surgery, have provided only limited improvement in the natural history of the disease (2). This dismal clinical and epidemiological picture underscores the need for novel treatment strategies to target this aggressive disease.

Over the last decade, the epidermal growth factor receptor (EGFR) has emerged as one of the most important signaling components involved in cell growth and survival. EGFR and its family members, ErbB2, ErbB3 and ErbB4, are receptor tyrosine kinases which send signals into the cell to regulate many critical processes including development, tissue homeostasis, and tumorigenesis (3). The binding of a ligand (e.g. EGF) to the extracellular region of the EGFR induces receptor dimerization and activation of the intracellular region. The intracellular tyrosine kinase domain then phosphorylates several tyrosine residues of the receptor and relays the signal to downstream signaling pathways (4). Extracellular signal-regulated kinase (ERK)1/2, which is one of the three major groups of mitogen-activated protein kinases (MAPKs) in mammals, is activated by the EGFR tyrosine kinase and plays an essential role in cell proliferation. The phosphatidylinositol 3-kinase (PI3K)/Akt pathway which is activated by the EGFR has been implicated in both cell proliferation and survival (5). Furthermore, recent large-scale retrospective analyses have reported that EGFR is overexpressed in 62% of NSCLCs (6). EGFR is implicated in the development and progression of the majority of common human epithelial cancers; therefore, various agents have been developed to block EGFR activation in cancer cells. Small molecule kinase inhibitors targeting the ErbB family have been the subject of intensive drug development and clinical trials in cancer therapy (7). Gefitinib (Iressa®) and erlotinib (Tarceva®) are members of a class of quinazolium-derived agents that inhibit the EGFR pathway by binding in a reversible fashion to the EGFR ATP pocket domain (8). Both agents are approved for treatment of patients with advanced NSCLC and have provided hope for better survival. However, their efficacy is still limited, predominantly due to drug resistance (9). Despite initial and sometimes dramatic responses of specific NSCLC cases to EGFR TKIs, nearly all patients develop resistance and relapse.

The type I insulin-like growth factor receptor (IGF-1R) signaling pathway is another important growth-regulatory pathway that is prevalent in a variety of cancer types, including NSCLC (14). IGF-1R is a heterotetrameric receptor (two extracellular 125-kDa α chains and two transmembrane 95-kDa β chains) that auto-phosphorylates after ligand binding and activates several downstream signaling routes, including the PI3K and MAPK pathways. Signaling through IGF-1R stimulates proliferation, promotes angiogenesis and metastasis, and inhibits apoptosis (15,16). Elevated IGF-1R expression and activity have been associated with multiple aspects of cancer progression including enhanced carcinogenesis, tumorigenesis, metastasis, resistance to chemotherapeutics and other molecularly targeted drugs and to transformation (17). Major signaling pathways activated by the IGF-1R and EGFR include the PI3K and MAPK pathways. Because these receptors appear to be so similar in their signaling mechanisms, it raises the possibility that IGF-1R signaling may be involved in tumor resistance to EGFR-TKIs. Investigations to date have also demonstrated that persistent activation of PI3K/Akt signaling is involved in acquired resistance to EGFR TKIs. In this study, we evaluated the effects of a combined treatment of the IGF-1R inhibitor AG1024 with gefitinib on the human non-small cell lung cancer PC9/G cell line with acquired resistance to gefitinib, and investigated the possible mechanisms through inhibition of IGF-1R.

The proliferative activity of PC9 and PC9/G cells for the different treatments was assessed using the Cell Counting Kit-8 (CCK-8) (Dojindo, Japan). Cells were plated in 96-well plates at 2,000 cells/well in complete medium and cultured for 24 h. The media were then replaced with RPMI-1640, 1% FBS with or without inhibitors. Each condition in each experiment was studied in five replicate wells. After incubation for 72 h, 10 μl of CCK-8 was added to each well, and the plates were further incubated for 4 h in an incubator. The absorbance at 450 nm was read spectrophotometrically using a microplate reader. The combination effect was evaluated by the CCK-8 assay. CI values <1, 1 and >1 indicated synergism, additive effect and antagonism, respectively.

Cell apoptosis was determined by the Annexin V fluorescein isothiocyanate (FITC) Apoptosis Kit I (BD Biosciences, Franklin Lakes, NJ, USA) according to the manufacturer’s protocol. Briefly, after treatment with different inhibitors for 24 h, cells were harvested, washed with PBS and resuspended in binding buffer. Cells were stained with Annexin V-FITC and 5 μl propidium iodide (PI), and incubated for 15 min at room temperature in the dark. Binding buffer 1X (400 μl) was added, and the cells were analyzed by flow cytometry (Beckman Coulter).

Both agents inhibited cell proliferation to different degrees (Fig. 1). To evaluate the cell growth inhibitory effect of the combination of AG1024 and gefitinib, we treated both cells with gefitinib and AG1024 for 72 h at a concentration ratio of 1:2. The combined treatment revealed that this co-targeting approach achieved a greater growth inhibition (Fig. 2). The combination index (CI) values were determined using the Chou and Talalay method (18), a well-established mathematical analysis to determine the pharmacologic interaction between two drugs. We evaluated the interactions between inhibitors as additive (CI=1), antagonistic (CI>1) or synergistic (CI<1). CI values significantly <1 in PC9 (CI=0.092) and PC9/G (CI=0.022) cells at the 50% inhibition level were observed, indicative of a synergistic effect. A similar synergestic effect was observed over the entire range of tested concentrations (Fig. 3).

Despite remarkable advances in oncology medicine, the prognosis of lung cancer patients has not greatly improved over the past few decades. One of the most significant developments in cancer research in recent years has been the clinical validation of molecularly targeted drugs that inhibit the action of pathogenic tyrosine kinases. Treatment of appropriately selected patients with these drugs can alter the natural history of their disease and improve survival (7). Beneficial responsiveness to these EGFR tyrosine kinase inhibitors in patients with NSCLC was found to be closely associated with EGFR mutations such as del746–750 and L858R in the kinase domain (19,20). In the present study, we established gefitinib-resistant NSCLC cells from the PC9 cell line, which harbors the delE746-A750 mutation in EGFR exon 19 and is highly sensitive to gefitinib, by inducing mutation with the mutagen MNNG. The gefitinib-resistant cells were subsequently selected for the experiments. A subclone of the gefitinib-resistant cell line was obtained by limited dilution, and its sensitivity for gefitinib was determined by the CCK-8 assay. We found that PC9/G cells showed more than a 100-fold higher IC50 for gefitinib than the parental cells. A previous study showed that the gene expression profile was also significantly different between PC9/G cells and the parental cells, as determined by a DNA microarray (21). Gene function annotation and grouping showed that fatty acid metabolism and oxidative phosphorylation-related genes were down-regulated, while glycolysis genes were up-regulated in this cell line. Moreover, the insulin-like receptor and positive regulative factors for the NF-κB cascade were up-regulated. These result suggest that the resistance to gefitinib may be due to activation of an alternative signaling pathway and the downstream molecules of the signaling pathway.

The IGF-1R and its associated signaling system has provoked considerable interest over recent years as a novel therapeutic target in cancer (22). Two classes of IGF-1R inhibitors are currently under clinical development for cancer therapy: mAbs and small molecule tyrosine kinase inhibitors, such as AG1024. In our study, gefitinib and AG1024 used as single agents showed antiproliferative activity in PC9 and PC9/G cells, and their combination resulted in a synergistic enhancement of growth inhibition. The mechanism of this action is associated with reversible G1 arrest induced by gefitinib (23). The antiproliferative effect was mainly found to be cytostatic, but high doses of the drug are needed to induce apoptosis in normal mammary epithelial cells and primary cultures of mammary carcinoma cells (24). Inhibiting the IGF-1R pathway by the addition of AG1024 improves the induction of apoptosis in PC9/G cells at a level higher than that upon treatment with gefitinib alone.

In addition, Western blot analysis showed that both gefitinib and AG1024 affect phosphorylation levels of ERK to different degrees, but that AG1024 is unable to reduce phosphorylation levels of Akt. Combination treatment induces a further reduction in the activation of the Akt and ERK signaling pathways downstream of EGFR. Notably, PC9 cells expressed high levels of phosphorylated and total EGFR, which were inhibited by gefitinib. In contrast, the phosphorylation levels of EGFR were slightly affected by the treatment in PC9/G cells. Therefore, we suggest that the maintenance of this survival pathway may be related to acquired resistance to gefitinib. IGF-1R signaling can activate downstream signaling pathways such as ERK/MAPK and PI3K/Akt, which are also modulated by EGFR (25). A previous study has suggested that crosstalk and interaction between the IGF-1R and EGFR is important, and clear evidence exists for the involvement of constitutive activation of the PI3K/Akt signaling pathway in lung carcinogenesis and resisitance to tyrosine kinase inhibitors (26). For example, EGFR-amplified cells with loss of PTEN exhibit resistance to EGFR inhibitors, even though inhibiting EGFR led to down-regulation of ERK signaling (27).

Some studies, for example in NSCLC and breast cancer, have suggested that IGF-1R expression is associated with improved survival, suggesting that the relationship of the IGF-1R system to outcome is more complex than initially thought (28). The mechanism of the IGF-1R pathway involvement in cellular resistance to gefitinib remains unclear. Further development of rational clinical strategies require greater clarification of the key signaling factors which are potential targets for cancer therapies (29). The data presented here support further research into NSCLC therapeutic strategies combining gefitinib with anti-IGF-1R agents.

In conclusion, the present study suggests that the IGF-1R pathway contributes to the acquired resistance of gefitinib in NSCLC. Combination therapy with AG1024 and gefitinib markedly inhibited the growth of PC9/G cells and showed a synergistic effect in inducing apoptosis. Combined blockade of EGFR and IGF-1R signaling may be considered as a new effective therapeutic approach for NSCLC patients to overcome gefitinib resistance. 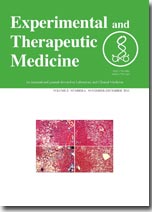