Embelin is a small-molecule inhibitor extracted from plants of the Myrsinaceae family demonstrating specific inhibition of the X-linked inhibitor of apoptosis protein (XIAP) to affect the proliferation and apoptosis of various types of tumor cells. However, the mechanism of action for this effect remains unclear. The purpose of the present study was to investigate the role of the mitochondrial pathway in embelin-induced HepG2 human hepatocellular carcinoma cell apoptosis and the effect of embelin on the cell cycle. HepG2 human hepatocellular carcinoma cells were treated with different doses of embelin. The MTT method was used to determine cell viability, and flow cytometry was used to assess the rate of apoptosis and the changes in mitochondrial membrane potential; the cell cycle was also analyzed. Western blot analysis was performed to determine the expression levels of the apoptosis-associated proteins Bax, Bcl-2 and the caspase family. The results revealed that embelin induced the apoptosis of the HepG2 cells in a dose- and time-dependent manner. In addition, embelin caused changes in mitochondrial membrane potential. Flow cytometric analysis demonstrated that embelin caused blockade of the HepG2 cells in the G2/M phase of the cell cycle.

The incidence of hepatocellular cancer (HCC) ranks fifth among all malignant tumors worldwide. Moreover, HCC is the third most common cause of cancer-related mortality worldwide (1–4), with more than 600,000 individuals succumbing to the disease each year. Similar to other solid tumors, surgical resection is the main treatment option for HCC (5), yet the high frequency of local recurrence and distant metastasis remain the largest obstacles to the survival of post-operative HCC patients (6). Due to the difficulty in the early diagnosis of HCC, most patients are treated during advanced or late-stage disease, and only a small percentage of patients have the chance of radical treatment. Therefore, the development of new approaches for clinical therapy of liver cancer is of utmost importance.

Embelin is a small-molecule inhibitor extracted from plants of the Myrsinaceae family. It is a polyphenolic compound that inhibits the X-linked inhibitor of apoptosis protein (XIAP) through bonding with the Smac bonding site in the BIR3 domain in the XIAP protein molecule (7,8). Previous studies have demonstrated that embelin has anti-inflammatory and anti-oxidative effects (9–11). Embelin has been found to suppress the growth of various types of tumor cells including breast, colon, prostate and pancreatic cancer cells. However, there have been no reports on whether embelin inhibits the growth of human hepatocellular carcinoma cells. Moreover, the detailed mechanism of embelin against tumors remains unknown.

The present study was designed to investigate the impacts of embelin in vitro on the apoptosis of HepG2 human hepatocellular carcinoma cells and the cell cycle, and to explore the embelin-induced apoptosis signaling pathway. We found that via the regulation of the Bax and Bcl-2 proteins, embelin releases cytochrome c and activates the caspase family to induce the apoptosis of HepG2 cells.

HepG2 cells in logarithmic growth phase were inoculated in a 96-well culture plate with a density of 1×105 cells/ml. After the cells grew to adherence, different doses of embelin were administered to various groups with 6 duplicate wells for each concentration. TAa negative control group without embelin treatment was established. All the cells were placed in a 5% CO2 incubator for further culture for 24, 48 and 72 h prior to color reaction. Each well was supplemented with 20 μl of MTT (5 mg/ml) and cultured in a CO2 incubator for 4 h before the culture solution was disposed of. DMSO (150 μl)was added to each well at room temperature and oscillation was carried out for 10 min and the OD values (A570nm) of each well were measured with a microplate reader.

During the early stage of apoptosis, phosphatidylserine was exposed outside the membrane from the interior of the cell membrane due to the lack of symmetry of the cell membrane. Trypsin (0.25%) was digested to collect the cells of all groups, and the cell density was adjusted to 1×106 cells/ml. Annexin V-FITC (5 μl), and 5 μl of PI were added, respectively, for dyeing (30 min at 4°C) before analysis with flow cytometry.

Analysis of the cell cycle by flow cytometry

The cell density was adjusted to 1×106 cells/ml, JC-1 dye liquor was added with a final concentration of 10 μg/ml and even mixing was carried out; the cells were cultured for 30 min at 37°C in a dark place. Analysis with flow cytometry was performed (BD Biosciences). JC-1 monomer and polymer fluorescent signals from FL1 and FL2 probes, respectively, were obtained. FL1-H indicated green fluorescence intensity and FL2-H indicated red fluorescence intensity. Quantitative analysis was carried out with Cellquest analysis software.

The cells of all groups were prepared using the trypsin method and 2 ml of lysis solution (50 mM of Tris-HCl, 137 mM of Nacl, 10% glycerin, 100 mM of sodium vanadate, 1 mM of PMSF, 10 mg/ml of apotinin, 10 mg/ml of eupeptin, 1% NP-40 and 5 mM of cocktail; pH 7.4) was added for cell lysis to retrieve the proteins. Proteins were loaded following the BCA method of rationing. The proteins were separated with SDS-PAGE. The proteins were shifted to PVDF membranes using a semidrying method and sealed with 5% skim mild powder at 4°C overnight. The membranes were washed with TBST and the first antibody was added at 37°C for hybrid for 1 h before bleaching with TBST. The second antibody was added at 37°C for hybridization for 1 h before bleaching with TBST and completing color reaction for 5 min with autoradiography. Quantity One was used for optical density value analysis and measurement. The results are presented as optical density value/actin optical density value of the samples.

HepG2 human hepatocellular carcinoma cells were treated with different doses of embelin (0, 40, 80 and 120 μg/ml) for 48 h and flow cytometry was used to assess the rate of apoptosis (Fig. 2). Our results indicate that with the increase of the embelin dose, the quantity of HepG2 apoptosis rose significantly (Fig. 2A and B). Therefore, embelin induces apoptosis of HepG2 human hepatocellular carcinoma cells in a dose-dependent manner.

In order to investigate whether embelin effects the HepG2 human hepatocellular carcinoma cell cycle, we used flow cytometry for the analysis. The results showed that 48 h after administering different doses of embelin to HepG2 cells, the HepG2 cells were blocked in the G2/M phase, which was apparently higher than that of the control group (Fig. 5). This indicates that embelin is able to inhibit the G2/M phase percentage of HepG2 cells to restrain the hepatocellular carcinoma cell proliferation.

Kerr et al (21) were the first to report on the concept of apoptosis. Apoptosis is ubiquitous in most of the tumor cells and plays an important role in the genesis and progression of tumors (22,23). Previous studies have demonstrated that antitumor drugs generally inhibit tumors through the induction of apoptosis of sensitive tumor cells, and their antitumor effects relate to the interior activation of the apoptosis of the tumor cells induced by the drugs. Therefore, the induction of apoptosis to treat tumors has become a new target for the development of antitumor drugs and constitutes a new direction in the current research in tumor pharmacology.

It is well known that the caspase family activates apoptosis-related protease when apoptosis occurs (30), so the activation of the caspase family is an important prerequisite for apoptosis. We analyzed the changes in the procaspase 9, 8, 3 proteins using western blot analysis after the treatment with embelin and found that the expression levels of procaspase 9 and 3 decreased significantly when hepatocellular carcinoma apoptosis occurred, but no apparent changes in procaspase 8 expression were observed. The release of cytochrome c from mitochondria to activate caspase 9, 3 is a key step of the apoptosis pathway (31). However, no apparent changes in procaspase 8 expression were found. These results indicate that the induction of hepatocellular carcinoma apoptosis by embelin is realized via the endogenous mitochondrial pathway instead of the exogenous death receptor pathway.

In summary, our study demonstrated that embelin releases cytochrome c and activates the caspase family, resulting in the induction of hepatocellular carcinoma apoptosis by regulating the action of the Bcl-2/Bax family on the mitochondrial pathway. Embelin may offer important contributions in the development of a new drug to prevent and cure HCC in the future. 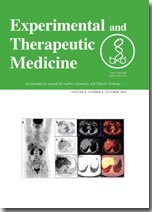