UV irradiation leads to cell aging, senescence, apoptosis and cancer in human keratinocytes by inducing reactive oxygen species (ROS), DNA damage and inflammatory and immunological reactions (1). Members of the mitogen-activated protein kinase (MAPK) family, including ERK1/2, p38 MAPK and JNK, are phosphorylated (activated) by UV irradiation (1). A low-dose of UVB (ultraviolet B) (0.1 kJ/cm2) significantly produces tumor necrosis factor α (TNF-α), which is involved in the suppression of contact hypersensitivity and in the decreased immunosurveillance in UV-damaged keratinocytes (2). In addition, the protein half-life of nuclear factor-κB (NF-κB) is prolonged by the inhibitor of NF-κBα (IκBα) phosphorylation and proteasomal degradation, and activated NF-κB may induce both anti- and pro-apoptotic pathways (3–7). Furthermore, UVB irradiation induces cytokine IL-21 and nitric oxide (NO), which are closely related to keratinocyte immune responses (8,9). Collectively, UVB irradiation activates multiple signaling cascades in keratinocytes.

microRNAs (miRNAs) are small, non-coding RNA molecules that directly regulate the expression of target mRNA transcripts (10). miRNAs have been reported to be involved in almost all cellular processes, including development, proliferation, immune response, metabolism and cell death (11–13). In human skin, miRNA-based studies first investigated miRNA expression patterns in normal human skin and melanocytic nevi (14,15). A functional relationship between keratinocyte miRNAs and psoriasis was reported, and it was determined that miR-125b modulates abnormal keratinocyte proliferation in psoriasis by targeting FGFR2 (16,17). The miRNA expression pattern during human keratinocyte differentiation has also been investigated (18). One recent study analyzed UVB-dependent miRNA expression profile changes in keratinocytes (19). Overall, these reports indicate that miRNAs may be key regulators of multiple cellular processes in keratinocytes and further suggest that miRNAs may have protective functions in response to UVB.

Centella asiatica (C. asiatica, also known as gotu kola) is a plant used in traditional herbal medicine with pharmacological effects on skin wound healing (20,21). It also shows anti-oxidant, anti-microbial and anticancer properties (22,23). We demonstrated that H2O2-induced cell senescence was inhibited by treating human dermal fibroblasts with a titrated extract of C. asiatica (TECA) (24). Although there was a recent report regarding the UVB protective effect of TECA treatment on dermal fibroblasts (25), the molecular mechanisms of UV protection have not been elucidated. Furthermore, a possible UV protective effect on human keratinocytes has not been studied. In this current study, we demonstrate that TECA exerts novel UVB protection in human keratinocytes and characterized miRNA expression profiles that correspond to TECA-mediated UVB protection.

Total RNA was extracted and purified with TRIzol reagent (Invitrogen Life Technologies) according to the manufacturer’s instructions. The integrity of each RNA sample was verified with an Agilent 2100 Bioanalyzer (Agilent Technologies, Santa Clara, CA, USA). The quality and concentration of each RNA sample were determined using MaestroNano (Maestrogen, Las Vegas, NV, USA). RNA quality parameters for miRNA microarray analysis were A260/280 and A260/A230 values >1.8 and an RNA integrity no. (RIN) >8.0.

The miRNA profiling analysis was performed using SurePrint G3 Human V16 miRNA 8 × 60K (Agilent Technologies) containing a probe for 1,205 and 144 human viral miRNAs. Each qualified RNA sample (100 ng) was dephosphorylated with calf intestinal alkaline phosphatase (CIP) at 37°C for 30 min. Then, the dephosphorylated RNA samples were labeled with cyanine 3-pCp using T4 RNA ligase by incubating at 16°C for 2 h. After the labeling reaction, the samples were completely dried using a vacuum concentrator at 55°C for 4 h. The dried samples were treated with GE Blocking Agent (Agilent Technologies) and hybridized to the probes on the microarray at 55°C, at 20 rpm in the Agilent Microarray Hybridization Chamber (Agilent Technologies) for 20 h. The microarray slide was washed and scanned with the Agilent scanner to obtain the microarray image. The numerical data for the miRNA profiles were extracted from the image with the Feature Extraction program (Agilent Technologies). These data were analyzed with GeneSpring GX software version 7.3 (Agilent Technologies). miRNAs whose flags were present in at least one sample were filtered and applied to the fold-change analysis, which was conducted by a factor of 1.5-fold between two groups: UVB-exposed/DMSO-treated control and UVB-exposed/2 μg/ml TECA-treated HaCaT keratinocytes.

We first assessed the cytotoxicity of TECA. HaCaT cells were treated with increasing doses of TECA (1, 2, 5, 10 or 20 μg/ml) for 24 h, and the WST-1-based cellular toxicity assay was used to determine cell viability. As shown in Fig. 1A, low doses (up to 5 μg/ml) of TECA had no significant cytotoxic effect on HaCaT cells, while higher doses (10 and 20 μg/ml) were more cytotoxic. Based on these results, we used 1, 2 and 5 μg/ml treatments in further experiments. Next, the protective activity of TECA on keratinocytes was determined. HaCaT cells pre-treated with TECA were exposed to 50 mJ/cm2 of UVB without any protective covers. After UVB-irradiation, the cells were incubated with the indicated doses of TECA for 24 h. The WST-1 assay showed that the irradiated cells without TECA displayed a 43.52% cell survival rate, compared to non-irradiated control cells and TECA treatment (2 μg/ml) markedly improved the cell survival rate to 71.25% (Fig. 1B). Overall, TECA prevented UVB-mediated keratinocyte cell death.

Bioinformatical analysis of TECA-specific miRNAs and their putative targets

We next assessed the biological meaning of the altered miRNA expression in UVB protection. miRNAs post-transcriptionally regulate gene expression by binding to target mRNAs, indicating that the biological functions of miRNAs are dependent on that of their target genes (26).

First, we analyzed the putative target genes of miRNAs that were meaningfully altered by TECA treatment using the miRNA target prediction bioinformatical tool MicroCosm. We observed that 1,354 and 1,975 genes were putatively targeted by the upregulated and downregulated miRNAs, respectively (p<0.05, data not shown). We next analyzed the biological functions for each target gene with the GO analytical tool AmiGO. Since UV irradiation induces cell aging and apoptosis (1), we sorted the target genes into several categories, including aging, apoptosis, cell proliferation and skin development (Tables II and III). We revealed that a number of target genes were involved in these four processes, suggesting that the effects of TECA may be functionally related to UV protective properties by affecting the protein products of those genes. For example, miR-636, which was increased by 3.51-fold by TECA, putatively targets genes such as suppressor of cytokine signaling 3 (SOCS3), microphthalmia-associated transcription factor (MITF), empty spiracles homeobox 2 (EMX2) and transcription factor 7-like 2 (TCF7L2). Conversely, miR-622 was decreased by 2.82-fold by TECA and putatively targets genes included nucleophosmin (NPM1), E2F transcription factor 1 (E2F1) and peroxisome proliferator-activated receptor δ (PPARD).

Predicted target genes of the miRNAs upregulated in response to TECA treatment in UVB-exposed HaCaT keratinocytes.

Predicted target genes of the miRNAs downregulated in response to TECA treatment in UVB-exposed HaCaT keratinocytes.

In keratinocytes, UV irradiation induces several molecular responses, such as pro-apoptotic signaling pathways; Ras-, MAPK- and small GTPase-mediated signal transduction and immune responses (1). We re-sorted the target genes in Tables II and III into categories of molecular responses. As shown in Fig. 3, the miRNA target genes were highly involved in these types of responses. However, the level of involvement varied. The majority of target genes was functionally related to anti-apoptosis and cell proliferation regulation, whereas a limited number of target genes was related to MAPKK activity. Collectively, these findings suggest that TECA-mediated UV protective properties may regulate molecular interplay between miRNAs and their target genes to influence apoptosis and cell proliferation.

Hashim et al (25) reported that C. asiatica protects against UVB damage in human dermal fibroblasts. However, we demonstrated that the protective effects also extended to keratinocytes and investigated the impact on miRNA. Although protecting keratinocytes from UVB-induced damage has been widely researched using other molecules and gene-based molecular studies, a limited number of miRNA-based molecular studies have been undertaken. Recently, p63-miRNA feedback was identified as an important signaling pathway in keratinocyte senescence (35). Another study determined that the protective effect of baicalin on UVB-treated keratinocytes was mediated by miRNA expression modulation (36), indicating that miRNAs have important roles in keratinocyte proliferation. Therefore, our miRNA-based study regarding keratinocytes may provide important information regarding anti-UV therapeutics.

Zhou et al (19) recently characterized the miRNA profile in UVB-irradiated normal human keratinocytes. Interestingly, they displayed that miR-296-5p and miR-423-5p were down-regulated and upregulated by UVB irradiation (30 mJ/cm2, for 4 and 24 h) respectively. We found that the expression levels of these miRNAs showed the opposite responses to C. asiatica treatment; miR-296-5p was significantly increased by 2.54-fold and miR-423-5p was decreased by 1.65-fold. These results indicate that these miRNAs may be novel C. asiatica target miRNAs that protect keratinocytes against UVB-induced damage.

The miRNA target prediction and GO analysis revealed that a number of the target genes were involved in the apoptosis and cell proliferation pathways. MAPK-mediated signaling pathways are reportedly involved in UVB responses in keratinocytes (1). However, our data demonstrated that the target genes were less involved in MAPK-related signal transduction, suggesting that miRNA-based UVB protection pathways in keratinocytes may be mediated via anti-apoptosis and positive regulation of cell growth pathways, rather than through a MAPK pathway. In fact, although UV irradiation increases phosphorylation-mediated activation of MAPK proteins, including p38 MAPK, JNK and ERK1/2, the transcription and translation levels of these proteins are not altered by UVB irradiation (1), indicating that the MAPK genes do not interplay with C. asiatica-specific miRNAs involved in protecting keratinocytes from UVB-induced damage.

In conclusion, our findings suggest that C. asiatica-mediated protective mechanisms are mediated by alterations in miRNA expression. Although further confirmative studies are required to verify miRNA alterations and their putative targets, these data provide meaningful information to further our understanding of the cellular responses in TECA-mediated UVB protection in human keratinocytes.

We are grateful to the members of our research group for their support and advice regarding this study. This study was supported by the Ministry of Education, Science and Technology (grant 20110028646 to S.A.) of the Republic of Korea. 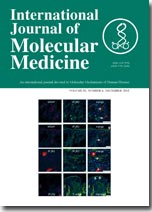