MMP-9, which degrades extracellular matrix, is believed to play a crucial role in tumor invasion and metastasis. Angiogenesis is also perceived as an important step in tumor growth and metastasis. The aim of this study was to investigate the expression of MMP-9 in tumor samples of HNSCC patients and to study a possible correlation to angiogenic markers. Cryostat sections of 52 HNSCC tumors were immunostained for MMP-9, bFGF and VEGF using a standard streptavidin-biotin complex procedure for light microscopic investigation. Microvessel density (MVD) was determined by staining of endothelial cells immunohistochemically using anti-vWF monoclonal antibody. MMP-9 positive staining was detected in 27/52 (52%) of the tumors. MMP-9 immunoreactivity did not correlate with the main clinicopathological characteristics of the patients (localisation, T-stage, N-stage, histological grading), but correlated with worse survival of the patients. MMP-9 negative tumors showed a significant lower mean MVD per microscopic field than MMP-9 positive tumors (p<0. 001). There was a significant association of MMP-9 and VEGF expression (p<0.05). The presence of MMP-9 in HNSCC cancer and the positive correlation with MVD and VEGF expression supports the theory that MMP-9 functions as a regulator of tumor angiogenesis supporting endothelial cell invasion. MMP-9 and VEGF might act co-operatively in the process of neovascularization in human head and neck cancer. 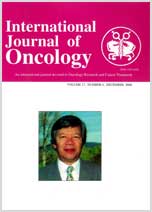