The role of the transforming growth factor β (TGFβ) pathway in the development and progression of esophageal cancers is poorly understood. As an initial step in clarification of this issue, the functional status of the TGFβ pathway was evaluated in a panel of esophageal cancer derived cell lines. Both adenocarcinoma and squamous cell carcinoma derived lines were represented. Although the TGFβ pathway was intact and functional in four of the five cell lines, only one of them was growth inhibited by TGFβ. In one cell line, the loss of a growth inhibitory response to TGFβ could be explained by decreased expression of Smad 4 and a general inability to activate TGFβ responsive promoters. In the other three cell lines, TGFβ was able to activate transcription of TGFβ responsive promoters, but unable to downregulate transcription of c-myc. Taken together these findings indicate that a selective loss in the ability of TGFβ to regulate expression of a key component of the growth inhibitory pathway may contribute to the poor prognosis of esophageal cancers. 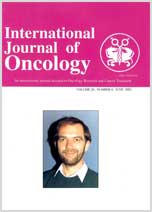