Loss of E-cadherin expression is a major characteristic of highly invasive and metastatic cancers. Epithelial-mesenchymal transition (EMT) has been advocated to be a causative mechanism for the suppression of E-cadherin and tumor progression. Snail is a zinc finger transcription factor that triggers the EMT and is one of the recently identified E-cadherin repressors. The reverse correlation of Snail and E-cadherin expressions has been reported in many types of human cancers including squamous cell carcinoma (SCC). In this study, we showed that three E-cadherin negative SCC cell lines had a fibroblastic morphology, strong expressions of vimentin, a mesenchymal marker gene, and Snail. Compared to other E-cadherin positive SCC cells, these cells showed higher invasive ability and expression of MMP-2, a matrix degrading enzyme which has been demonstrated to be highly expressed in invasive cancer cells. Over-expression of Snail in A431 cells resulted in the loss of E-cadherin expression, the change of their morphology to fibroblastic, and the up-regulation of vimentin gene expression, indicating that an EMT was induced by Snail. Furthermore, these cells became more invasive and showed higher levels of MMP-2 activity and its gene expression. Luciferase analysis demonstrated that the MMP-2 promoter activity was induced by Snail transfection and the promoter region from -262 to -411 relative to the transcriptional start site was necessary for this induction. These results indicate that Snail is a new inducer of MMP-2 expression and suggest that the EMT contributes to the increased invasion not only through the inhibition of cell-cell adhesion but also the up-regulation of MMP-2 expression in SCC cells. 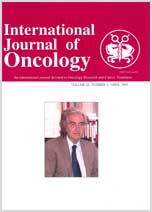