Angiogenesis is an important process involved in tumor growth and metastasis. Many studies have investigated the use of natural compounds such as angiogenic inhibitors. Xylitol is a 5-carbon sugar alcohol and is an artificial sweetener that has been used in chewing gums to prevent tooth decay. Xylitol has been also known to inhibit inflammatory cytokine expression induced by lipopolysaccharide (LPS). Since angiogenesis and inflammation share a common signaling pathway, we investigated the role of xylitol in angiogenesis. Xylitol inhibited the migration, invasion and tube formation of human umbilical vein endothelial cells (HUVECs). Xylitol also inhibited in vivo angiogenesis in a mouse Matrigel plug assay. Furthermore, mRNA expression of vascular endothelial growth factor (VEGF), VEGFR-II (KDR), basic fibroblast growth factor (bFGF), bFGFR‑II, matrix metalloproteinase-2 (MMP-2) and MMP-9 of HUVECs decreased following treatment with xylitol. These anti-angiogenic effects of xylitol are exerted through inhibition of NF-κB and Akt activation. Taken together, these results suggest that xylitol acts as a beneficial angiogenesis inhibitor.

Angiogenesis is the development of new capillaries from preexisting vasculature during tumor growth and metastasis (1,2) and is regulated by the balanced action of angiogenic activators and inhibitors (3,4). This process is complex and involves diverse cellular actions, such as degradation of the extracellular matrix (ECM), proliferation and migration of endothelial cells, and morphological differentiation of endothelial cells to form tubes (5).

Angiogenesis and inflammation are important processes involved in tumor growth and expansion (6–8). Natural compounds with anti-inflammatory properties can also have anti-angiogenic activities since these processes share a common signaling pathway such as NF-κB and Akt (9,10). One of these natural compounds is xylitol. Xylitol, first derived from Birch trees in Finland in the 20th century (11), is a 5-carbon sugar alcohol (12) (Fig. 1). It has been widely used as a sugar substitute and is found in the fibers of many fruits and vegetables (13). Xylitol can also be used as an artificial sweetener in chewing gums to prevent tooth decay (14,15).

HUVECs were grown in M199 supplemented with heat-inactivated 20% fetal bovine serum (JBI), 20 ng/ml of bFGF, 10 U/ml of heparin, 100 U/ml of penicillin and 100 μg/ml of streptomycin in a 37°C incubator with a humidified atmosphere containing 5% CO2.

Seven-week-old, specific pathogen-free (SPF) male C57BL/6 mice were supplied by Hyochang Science and Samtako (Daegu and Kyung-gi, Korea). They were provided with autoclaved tap water and lab chow ad libitum and were housed at 23±0.5°C, 10% humidity under a 12-h light-dark cycle. The animal protocol used in this study was reviewed on the ethical procedures and scientific care, and approved by the Pusan National University-Institutional Animal Care and Use Committee (PNU-IACUC).

HUVECs (2×104 cells) were seeded on a layer of previously polymerized Matrigel and treated with or without xylitol. Matrigel culture was incubated at 37°C. After 6 h, changes in cell morphology were captured through a phase contrast microscope and photographed at ×40 magnification. Each sample was assayed in duplicate and independent experiments were repeated three times.

HUVECs were seeded onto 24-well culture plates until confluence and left overnight. Media was aspirated the next day, and cells were scratched with a 200 μl pipette tip along the diameter of the well. Cells were washed twice with PBS and incubated at 37°C and 5% CO2. After wounding, the cultures were washed with serum-free medium and further incubated in M199 with 1% serum, 1 mM thymidine and/or xylitol. These culture conditions minimized proliferation of HUVECs. Wound diameters were photographed at 18 to 24 h. Wound closure was determined by measurement with optical microscopy at ×40 magnification. Migration was quantitated by counting the number of cells that moved beyond the reference line. Each sample was assayed in duplicate, and independent experiments were repeated three times.

Invasiveness of HUVECs was performed in vitro using a Transwell chambers system (Corning-Costar) with 8.0-μm pore polycarbonate filter inserts. The upper side was coated with 10 μl of Matrigel (0.5 mg/ml) at room temperature for 1 h. Cells (2×104 cells) and xylitol in serum-free medium was placed in the upper part of the filters, and full medium was treated in the lower parts. Cells were incubated at 37°C for 24 h, fixed with methanol, and then stained with hematoxylin and eosin. Cells on the upper surface of the membrane were removed by wiping with a cotton swab. Cell invasion was determined by counting whole cell numbers in a single filter by optical microscopy at ×40 magnification. Each sample was assayed in duplicate and independent experiments were repeated three times.

C57BL/6 mice (7 weeks of age) were injected subcutaneously into 500 μl of Matrigel (Collaborative Biomedical Products, Bedford, MA, USA) containing bFGF (100 ng/ml) and heparin (50 U/ml) without or with xylitol. After injection, the Matrigel rapidly formed a plug. After 7 days, skin of the mouse was pulled back to expose the Matrigel plug, which remained intact. After quantitative differences were noted and photographed, hemoglobin content was measured using the Drabkin reagent kit 525 (Sigma) for quantification of blood vessel formation. The amount of hemoglobin was calculated from a known amount of hemoglobin assayed in parallel. Independent experiments were repeated twice and at least five mice in each experiment were used.

HUVECs were treated with or without xylitol for 24 h in medium. Total cell lysates were prepared by addition of PRO-PREP Protein Extraction Solution (iNtRON Biotechnology), including 1 mM sodium orthovanadate. Equal amounts (30 μg) of samples were resolved by electrophoresis on a 10% SDS-polyacrylamide gel, transferred to a membrane and sequentially probed with antibody. The following primary antibodies were used at the indicated dilutions: total NF-κB and anti-phospho-NF-κB, total Akt and anti-phospho-Akt, 1:1,000 in 5% BSA in TBS-T.

Because differentiation of endothelial cells into a capillary-like network is important for the process of angiogenesis, we tested the effect of xylitol on the morphological differentiation of endothelial cells in vitro. HUVECs were placed on a Matrigel-coated plate and incubated. Endothelial cells formed weak capillaries on Matrigel beds, and these tubes became stronger and more robust with elongated networks over 6–24 h. HUVECs on Matrigel formed a blood vessel-like network in the absence of xylitol (Fig. 2), whereas treatment with xylitol for 18 h resulted in broken, shortened and narrow tube networks. This result shows that xylitol inhibits tube formation of HUVECs.

To examine the effect of xylitol on in vivo angiogenesis, we performed a mouse Matrigel plug assay, an established in vivo angiogenesis model. As shown in Fig. 4A, Matrigel plugs containing bFGF were abundantly filled with intact red blood cells, indicating formation of a functional vasculature inside the Matrigel, whereas vessels were not observed in the Matrigel alone (blank). Matrigel plugs containing xylitol produced fewer vessels compared with plugs containing bFGF, indicating that xylitol inhibits formation of bFGF-induced neo-microvessels. We then measured the hemoglobin content inside the Matrigel plugs to quantify the anti-angiogenic effect of xylitol. The amount of hemoglobin indicates the degree of formation of a functional vasculature inside the Matrigel. The hemoglobin content of bFGF-treated plugs was 31.8 g/dl, whereas that of 1 mM xylitol-treated plugs was profoundly lowered to approximately 1.4 g/dl (Fig. 4B). These results indicate that xylitol has strong anti-angiogenic activity in vivo.

Regulation of extracellular proteolytic activity is important for endothelial cell migration and invasion, and MMP-2 and MMP-9 are major functional molecules involved in the degradation of the extracellular membrane (21). Thus, we examined the effect of xylitol on the mRNA expression of MMP-2 and MMP-9. Expression of both molecules was markedly downregulated following treatment with xylitol in a dose-dependent manner (Fig. 5C). These data suggest that downregulation of VEGF, KDR, bFGF, bFGFR-II, MMP-2 and MMP-9 mRNA expression may be responsible for the anti-angiogenic action observed in HUVECs treated with xylitol.

Angiogenesis is required for tumor growth and expansion. Angiogenesis is the formation of new blood vessels from existing vessels; these processes involve several cascades (19,20,25). Inflammation is also known to be a central process in many cancers during tumorigenesis (26). Therefore, signal transduction of angiogenesis and inflammation can occur simultaneously (27).

Xylitol was first derived from Birch trees in Finland, and it is used as a safe sweetener for diabetic patients (11). Xylitol is obtained from natural sources, including plums, strawberries, raspberries, and rowanberries (12,28,29). It is used in various food products such as chewing gum, candy and soft drinks (30). Xylitol has also been used to prevent tooth decay since it inhibits the growth of Streptococcus mutans (31,32).

Recently, xylitol was reported to have an inhibitory effect on LPS-induced inflammatory cytokine expression (16). Since inflammation and angiogenesis share a common signaling pathway (17,18), molecules that show anti-inflammatory activity also show anti-angiogenic activity (8,27). Therefore, we examined whether xylitol has anti-angiogenic effects by using in vitro and in vivo angiogenesis assays. In this study, we found that xylitol inhibited in vitro and in vivo angiogenesis. Xylitol strongly inhibited tube formation (Fig. 2), migration (Fig. 3A), and invasion (Fig. 3B) of HUVECs. Xylitol prominently inhibited the formation of neo-microvessels in the Matrigel assay (Fig. 4A), and reduced the hemoglobin content in the Matrigel plug (Fig. 4B). These results suggest that xylitol suppresses angiogenesis both in vitro and in vivo.

NF-κB and Akt comprise a multiunit transcription factor that plays a central role in tumorigenesis and is involved in tumor cell invasion and metastasis (24,36). We examined the effect of xylitol on NF-κB and Akt activation by western blot analysis. Protein expression of NF-κB and Akt did not change following treatment with xylitol; however, NF-κB and Akt phosphorylation was suppressed in a dose-dependent manner (Fig. 6).

In summary, we found that xylitol inhibited in vitro and in vivo angiogenesis. These effects of xylitol are linked with the mRNA expression of VEGF, KDR, bFGF, bFGFR-II, MMP-2 and MMP-9. Xylitol inhibited angiogenesis by inhibiting the NF-κB and Akt signal pathway. Furthermore, xylitol is widely used as a sugar substitute as well as an artificial sweetener in chewing gums to prevent tooth decay. Therefore, xylitol may be a promising candidate as an inhibitor of angiogenesis-related diseases.

This study was financially supported by the 2012 Postdoc. Development Program of Pusan National University and was supported by the Basic Science Research Program through the National Research Foundation of Korea (NRF) funded by the Ministry of Education, Science and Technology (2011-0024330). 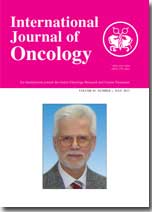