Epigallocatechin-3-gallate (EGCG) has been shown to inhibit the growth and induce apoptosis of certain cancer cells. The aim of this study was to determine the role of EGCG in hepatocellular carcinoma (HCC) and the underlying mechanism(s) thereof. MTT assay was used to determine the cell growth inhibition by EGCG. Apoptosis induced by EGCG was investigated by both AO/EB staining and flow cytometry. The cell cycle distribution was analyzed by flow cytometry. The mRNA levels of the AKT pathway were analyzed by quantitative PCR. The expression of AKT and its phosphorylation at Ser473 were detected by western blotting. The IC50 of EGCG at 48 h for HepG2, SMMC7721 and SK-hep1 cells were 74.7, 59.6 and 61.3 µg/ml, respectively. Significantly higher proportion of SMMC7721 cells entered the S phase upon treatment with EGCG for 48 h compared with control cells. EGCG decreased the mRNA levels of PI3K, AKT and NF-κB. The protein levels of AKT decreased and its phosphorylation at Ser473 was downregulated with EGCG treatment. EGCG inhibited growth by affecting the cell cycle and induced apoptosis in different HCC cells by downregulating PI3K/AKT activity. The results suggest the potential of EGCG as an anticancer agent in the prevention or treatment of HCC.

Hepatocellular carcinoma (HCC) is one of the most prevalent cancers in the world, characterized by high mortality rate and poor prognosis (1). Lack of effective treatment options and late diagnosis are major reasons for the high mortality rate in HCC (2). A new therapeutic strategy to address these challenges cannot be overstated.

Green tea, compared with other teas, has a higher concentration of catechin. Epigallocatechin-3-gallate (EGCG) is a water-soluble catechin, which suppresses the multiplication of cancer cells and induces apoptosis (3–5). EGCG suppressed adhesion and invasion of hepatocarcinoma cells through antioxidant activity (6). EGCG inhibited the growth and metastasis of pancreatic cancer (7,8) and colorectal cancer (9), reduced the incidence of esophageal cancer (10) and improved the prognosis of breast cancer (11). It also inhibited the growth of HepG2 cells (12).

The role of EGCG in proliferation or apoptosis via AKT pathway in HCC has yet to be reported. In this study, we reported on the ability of EGCG to inhibit cell growth in HepG2, SMMC7721 and SK-hep1 cell lines, in vitro. We also discovered that EGCG induced apoptosis and S phase arrest by affecting the PI3K/AKT pathway in SMMC7721 cells, in vitro.

All human hepatocellular carcinoma cell lines were obtained from Shanghai Institutes for Biological Sciences, Chinese Academy of Science, China. HepG2, SMMC7721 and SK-hep1 cells were cultured in Dulbecco’s modified Eagle’s medium (DMEM) supplemented with 10% fetal bovine serum, 100 U/ml penicillin and 100 μg/ml streptomycin (all from Hyclone, USA) at 37°C in a humidified incubator containing 5% CO2. Cells were subcultured every two days when the density of cells reached 80%.

HepG2, SMMC7721 and SK-hep1 cells were seeded in 6-well plates at a density of 2×104 cells per well overnight. HepG2, SMMC7721 and SK-hep1 were then treated with EGCG at concentration of 74.7, 59.6 and 61.3 μg/ml respectively. Later, cells were stained with acridine orange (AO) and ethidium bromide (EB) using Normal/Apoptosis/Necrosis identification kit (KeyGen, China), following the manufacturer’s instructions. Apoptosis of HCC cells was observed under an IX51 inverted fluorescent microscope (Olympus, Japan).

SMMC7721 cells were treated with or without 59.6 μg/ml EGCG in 6-well culture plates for 48 h. Approximately 1×106 cells were collected, washed with 1X PBS and fixed with 70% ethanol at −20°C overnight. Cells were then centrifuged and washed with PBS three times, re-suspended in 100 μl RNase A, incubated at 37°C for 30 min, followed by staining with 400 μl propidium iodide (PI) staining solution (BD Sciences, USA) and incubated at 4°C in the dark. Finally, DNA contents in stained nuclei were analyzed with a flow cytometer (Beckman coulter Epics XL, USA).

SMMC7721 cells were treated with or without 59.6 μg/ml EGCG for 48 h. Cells were then washed twice with PBS. Then they were stained with Annexin V and PI (BD Sciences) in binding buffer. Cells were then analyzed using flow cytometry (BD Caliber, USA).

Total RNA was extracted from SMMC7721 cells treated with or without 59.6 μg/ml EGCG for 48 h, using TRIzol reagent according to the manufacturer’s instructions (Invitrogen, USA) and quantified by NanoDrop2000 (Thermo Scientific, USA). The cDNA was generated from 0.5 μg total RNA using a ReverTra Ace® qPCR RT kit (Toyobo, Japan) following the manufacturer’s protocol and stored at −20°C.

Differences between the two groups were analyzed with the Student’s t-test unless indicated otherwise. Results were considered statistically significant at a P<0.05.

To investigate the effect of EGCG on hepatocellular carcinoma cells, HepG2, SMMC7721 and SK-hep1 cells were treated with EGCG at different concentrations and time-points. The inhibition rate was calculated, based on the cell viability, determined by MTT assay. As shown in Fig. 1, the inhibition rate increased with the increase in concentration of EGCG across all three cell lines (Fig. 1). The cell growth inhibition rates at 48 h were significantly higher compared with rates at 24 h, at each concentration in all cell lines. However, the difference between rates at 48 and 72 h following treatment was not significant. As a result, we chose 48-h pretreatment in the following experiments. The half maximal (50%) inhibitory concentrations (IC50) of EGCG at 48 h for HepG2, SMMC7721 and SK-hep1 were 74.7, 59.6 and 61.3 μg/ml, respectively (Fig. 1).

We next measured apoptosis in the presence of EGCG, as apoptosis was closely related to cell growth. Each cell line was treated with EGCG at IC50 concentration for 48 h. The cell numbers of EGCG-treated group were significantly less than the control group (Fig. 2). Untreated cells (control) showed normal structure without prominent apoptosis and necrosis. The AO/EB staining indicated late apoptosis in 48-h incubated cells (Fig. 2), represented by orange staining. Flow cytometry also confirmed induction of apoptosis by EGCG in SMMC7721 cells. In EGCG-treated SMMC7721 cells, increased early and late apoptosis were observed (Fig. 3A). The total percentage of apoptosis (sum up of early stage and late stage) was 25.1±4.2% in EGCG-treated cells, compared with 9.0±2.7% in the non-treated control cells (Fig. 3B).

To further investigate the underlying mechanism, we analyzed distribution of the cell cycle by flow cytometry (Fig. 4). After 48-h treatment, the percentage of EGCG-treated SMMC7721 cells in S phase was significantly higher compared with non-treated cells (49.7±1.2 vs. 22.1±1.5%, Fig. 4). This result suggested that EGCG arrested SMMC7721 cells at S phase.

EGCG decreases the transcription of PI3K and AKT

We further investigated the role of AKT pathway mediating EGCG function in SMMC7721 cells. The mRNA level of AKT was quantified by qPCR (Fig. 5). The results showed that relative mRNA levels of PI3K and AKT decreased ∼31 and 29% respectively, after treatment with EGCG compared with control. NF-κB was the major downstream effector of AKT. The transcription of NF-κB was 43% lower in the SMMC7721 cells treated with EGCG than control cells (P<0.05).

EGCG downregulates the expression of AKT and its phosphorylation

HCC is characterized by high mortality rate and poor prognosis (1). HepG2, SMMC7721 and SK-hep1 are classic cell lines for studying HCC. Studies have shown that EGCG induced tumor apoptosis, and prevented tumor invasion and metastasis (6,8,15–17). We therefore, used these cell lines to investigate the effect of EGCG on inhibition of cell growth and the underlying mechanism. We observed that EGCG halted cell growth and induced apoptosis of SMMC7721 cells, which was also confirmed in other HCC cell lines (Figs. 1–3). Further, we observed that the IC50 of these three HCC cell lines at 48 h ranged from 60 to 75 μg/ml (Fig. 1), which was in accordance with previous studies (17–19).

Progression through each phase of the cell cycle is regulated carefully to avoid proliferation under adverse conditions. Cells are arrested in G1, S and G2/M phases to prevent replication of damaged DNA or to prevent aberrant mitosis. Previous studies reported that EGCG blocked progression of the cell cycle at G1 phase in HCC lines (12), which is reportedly related to the activation of AMPK (12). However, we found that EGCG caused S phase but not G1 arrest in SMMC7721 cells (Fig. 4), which might be attributed to the unique features of HCC cell lines.

PI3K/AKT pathway was reported to play an important role in cancer proliferation and migration. Previous studies indicated the role of PI3K/AKT pathway in the development and progression of HCC cells, mainly reflected in the mechanism of liver cancer cell proliferation, differentiation and apoptosis (20–22). The effect of EGCG on PI3K/AKT pathway in carcinogenesis, progression and metastasis in various type of tumors, have been widely studied in breast cancer (23), pancreatic cancer (8), endometrial cancer (24) and thyroid carcinoma (25). Here, we first detected the mRNA level of major components of AKT pathway, and found that EGCG downregulated the PI3K, AKT and NF-κB (Fig. 4). Phosphorylation at Ser473 and Thr308, AKT activates the downstream signaling molecules including the NF-κB and regulates cancer cell apoptosis (26–28). Phosphorylation of AKT at Ser473 in SMMC7721 cells was reduced by EGCG (Fig. 5), which was consistent with a previous study of HepG2 cells, reporting that EGCG induced apoptosis and caused a decrease in the p-IGF-1R protein and its downstream signaling molecules including the p-ERK, p-Akt, p-Stat-3, and p-GSK-3β proteins (29).

EGCG affects both upstream and downstream targets of AKT. Previous reports showed that EGCG inhibited the thrombin-PAR1/PAR4-p42/p44 MAPKinase invasive signaling axis in hepatocellular carcinoma cells (30). HIF-1α/VEGF function was also a therapeutic target for EGCG in cancer chemoprevention and anticancer therapy (15,22). EGCG also delayed HCC cell growth through inhibition of Bcl-2 family (16,19) or induced apoptosis in HCC cells via downregulation of COX-2 and Bcl-2, and consequently activated caspase-9 and caspase-3 (31). The anti-metastatic effects of EGCG were associated with the inhibition of MMP-2 and MMP-9 activity (32,33).

In conclusion, our study provides evidence that EGCG inhibited HCC cell growth by affecting cell cycle and inducing apoptosis via downregulation of PI3K/AKT activity. The results suggested that EGCG is a potential anticancer agent in HCC therapy. 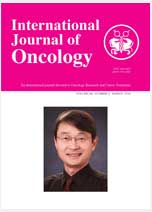