Pterostilbene is an effective chemopreventive agent against multiple types of cancer cells. A novel pterostilbene derivative, ANK-199, was designed and synthesized by our group. Its antitumor activity and mechanism in cisplatin-resistant CAR human oral cancer cells were investigated in this study. Our results show that ANK-199 has an extremely low toxicity in normal oral cell lines. The formation of autophagic vacuoles and acidic vesicular organelles (AVOs) was observed in the ANK-199-treated CAR cells by monodansylcadaverine (MDC) and acridine orange (AO) staining, suggesting that ANK-199 is able to induce autophagic cell death in CAR cells. Neither DNA fragmentation nor DNA condensation was observed, which means that ANK-199-induced cell death is not triggered by apoptosis. In accordance with morphological observation, 3-MA, a specific inhibitor of PI3K kinase class III, can inhibit the autophagic vesicle formation induced by ANK-199. In addition, ANK-199 is also able to enhance the protein levels of autophagic proteins, Atg complex, beclin 1, PI3K class III and LC3-II, and mRNA expression of autophagic genes Atg7, Atg12, beclin 1 and LC3-II in the ANK-199-treated CAR cells. A molecular signaling pathway induced by ANK-199 was therefore summarized. Results presented in this study show that ANK-199 may become a novel therapeutic reagent for the treatment of oral cancer in the near future (patent pending).

Pterostilbene, a natural stilbenoid compound of phenolic phytoalexin analogue, is found in narra tree, grape and blueberries (Fig. 1A) (1–4). It possesses many different pharmacological and biologic activities, such as anticancer activity with low intrinsic toxicity (4–6), anti-inflammatory properties (7–9), anti-oxidative effect (2), regulation of neutrophil function (10,11) and protection against free radical-mediated oxidative damage (12–14). The anticancer activity of pterostilbene has drawn the most attention among of them so far (1,4–6). As reported in previous studies, pro-apoptosis (4,15,16), pro-autophagy (17–19), telomerase inhibition (20), DNA damage (12,13,15), anti-angiogenesis (21), anti-metastasis (4,21) and immuno-stimulatory effects (10,11) are possible mechanisms responsible for its anticancer activity.

Chewing the mixtures of betel leaf and areca nut is a popular custom in many South and Southeast Asia countries. It is a high risk factor for oral cavity carcinoma (43,44), and is the 4th most common cause of cancer death in Taiwanese males (45). Natural product with high anticancer activity and low toxicity, like pterostilbene, appears to be an ideal candidate to prevent or treat oral cancer, as it can directly contact with human oral mucosa without intravenous administration or surgery (22). The anti-oral cancer activity of pterostilbene derivative, ANK-199, was first investigated in this study. Both normal human oral cell lines and cisplatin-resistant CAR human oral cancer cell lines were used. Here, we report the cytotoxic effect and anticancer mechanism of ANK-199 in human oral cancer CAR cells.

CAR cells were seeded on sterile coverslips in tissue culture plates with a density of 5×104 cells/per coverslip. After 0, 50, 75 μM of ANK-199 treatment for 24 h, cells were stained with either 1 μg/ml AO or 0.1 mM MDC at 37°C for 10 min. The occurrece of autophagic vacuoles and AVO were immediately observed under fluorescence microscopy (Nikon, Melville, NY, USA) (46–48).

The induction of autophagy was detected with the Premo™ Autophagy Sensor (LC3B-GFP) BacMam 2.0 kit (Molecular Probes/Life Technologies). CAR cells were seeded on sterile coverslips in tissue culture plates with a density of 1×104 cells/per coverslip. After CAR cells were transfected with LC3B-GFP in accordance with the manufacturer’s protocol, cells were treated with 0, 50 and 75 μM of ANK-199 for 24 h. Cells were then fixed on ice with 4% paraformaldehyde, and the slides were mounted and analyzed by a fluorescence microscope. After treatments, cells were stained with 4′,6-diamidino-2-phenylindole (DAPI, Molecular Probes/Life Technologies) and photographed using a fluorescence microscope (46,47,49).

CAR cells (1×107 cells/75-T flask) were treated with ANK-199 (50 and 75 μM) for 48 h. At the end of incubation, the total proteins were prepared, and the protein concentration was measured by using a BCA assay kit (Pierce Chemical, Rockford, IL, USA). Equal amounts of cell lysates were run on 10% SDS-polyacrylamide gel electrophoresis and further employed by immunoblotting as described by Lin et al (46).

CAR cells (5×106 per T75 flask) were incubated with or without 75 μM of ANK-199 for 24 h. Cells were scraped and collected by centrifugation. The total RNA was subsequently isolated as stated above, and the purity was assessed at 260 and 280 nm using a Nanodrop (ND-1000; Labtech International). Each sample (300 ng) was amplified and labeled using the GeneChip WT Sense Target Labeling and Control Reagents (900652) for Expression Analysis. Hybridization was performed against the Affymetrix GeneChip Human Gene 1.0 ST array. The arrays were hybridized for 17 h at 45°C and 60 rpm. Arrays were subsequently washed (Affymetrix Fluidics Station 450), stained with streptavidin-phycoerythrin (GeneChip Hybridization, Wash, and Stain Kit, 900720), and scanned on an Affymetrix GeneChip Scanner 3000. Resulting data were analyzed by using Expression Console software (Affymetrix) with default RMA parameters. Genes regulated by ANK-199 were determined with a 1.5-fold change. For detection of significantly over-represented GO biological processes, the DAVID functional annotation clustering tool (http://david.abcc.ncifcrf.gov) was used (DAVID Bioinformatics Resources 6.7). Enrichment was determined at DAVID calculated Benjamini value <0.05. Significance of overexpression of individual genes was determined (50).

All the statistical results were expressed as the mean ± SEM of triplicate samples. Statistical analyses of data were done using one-way ANOVA followed by Student’s t-test, and *p<0.05 and ***p<0.001 were considered significant.

CAR cells were treated with different concentrations of ANK-199 for 24, 48 and 72 h. ANK-199 concentration- and time-dependently decreased cell viability of CAR cells (Fig. 2A). The half maximal inhibitory concentration (IC50) for a 24, 48 and 72-h treatment of ANK-199 in CAR cells were 106.21±3.21, 73.25±4.20 and 32.58±2.39 μM, respectively. To investigate whether the cell death was mediated through apoptosis by ANK-199, cells were treated with 50 and 75 μM ANK-199 for 48 h. The appearance of DNA fragmentation was not observed (data not shown), suggesting that ANK-199 was unable to induce apoptosis in CAR cells. As shown in Fig. 2B, ANK-199 was able to induce the formation of autophagic vacuoles in CAR cells in a time-dependent manner in the presence of 50 μM ANK-199 for 24, 48 and 72 h. This result implies that autophagic cell death plays a pivotal role in ANK-199-induced cell death. However, no viability impact and morphological trait change was observed in ANK-199-treated HGF and OK cells, suggesting that ANK-199 has an extremely low toxicity in normal oral cell lines. In accordance with this observation, the IC50 value of HGF and OK cells is greater than 100 μM (Fig. 3A and B). In short, ANK-199-induced cell death of CAR cells is mediated through autophagic death, rather than apoptosis.

To further confirm the formation of autophagosome vesicles in ANK-199-treated CAR cells, the autophagic cell death caused by ANK-199 was monitored by using MDC staining, a popular fluorescent marker that preferentially accumulates in autophagic vacuoles (46,48). After cells were treated with 50 and 75 μM of ANK-199 for 48 h, autophagic vacuoles were easily observed under fluorescence microscopy (Fig. 4A). The intensity of MDC staining was directly proportional to the concentration of ANK-199. The ANK-199-triggered autophagic cell death was also examined by using AO staining. In Fig. 4B, AO staining of ANK-199-treated CAR cells clearly showed the presence of AVOs within the cytoplasm compared to control. Microtubule-associated protein 1 light-chain 3 (LC3) is an autophagic membrane marker for the detection of early autophagosome formation (46,49). The LC3 distribution in ANK-199-treated CAR cells was also investigated. A more punctate pattern of LC3B-GFP was observed in ANK-199 treated cells (Fig. 4C). The occurrence of DNA condensation was also investigated in the presence of 50 and 75 μM ANK-199 for 24 h. No significant change was observed in ANK-199-treated CAR cells under microscope, which means that ANK-199-induced cell death triggered by apoptosis is quite unlikely (Fig. 4D). Again, all of the above results support that ANK-199-induced cell death in CAR cells is mediated through the induction of autophagic death instead of apoptosis.

The cDNA microarray experiments were carried out to examine the gene expression in ANK-199-treated CAR cells. The transcripts of 26 genes were upregulated, while these of 96 genes were downregulated in ANK-199-treated CAR cells (Table I). The important biological processes and Gene to Go Molecular Function test regulated by ANK-199 are listed in Table II and Table III. The formation of autophagosomes and autophagolysosome was observed during the course of ANK-199 induced autophagic cell death. In a good agreement with above results, membrane formation or reorganization is closely associated with following biological processes: cellular component biogenesis, actin cytoskeleton organization, regulation of actin filament-based process, regulation of cytoskeleton organization, regulation of actin polymerization or depolymerization, regulation of actin filament length.

The genes with more than 1.5-fold changes in mRNA levels in CAR cells after ANK-199 (50 μM) 24-h treatment identified by DNA microarray.

Apoptosis, autophagy and necrosis are three major routes that lead to cell death (51). Both apoptosis and autophagy belong to the form of cell programmed death, but necrosis does not (51–54). Autophagic death can promote cell survival or cell death when cells experience stress, such as damage, nutrient starvation, aging and pathogen infection (55–57). Indeed, induction of autophagic death for cancer cells is thought to be one of the best strategies in chemotherapy (58–60). Not only many autophagy-related proteins (Atgs) are involved in this process, but also a specific morphological and biochemical modification can be observed (56,60,61). Autophagy is first triggered by membrane nucleation, which is mediated by phosphatidylinositol 3-kinase (PI3K) class III, beclin 1 (the mammalian ortholog of yeast ATG6), rubicon and Atg14 (62–64). The cytoplasm and phagophore of various organelles are then sequestered by a membrane to form an autophagosomes. Atg16L1-Atg12-Atg7-Atg5 complex and microtubule-associated protein 1 light chain 3 type II (LC3-II) (membrane-bound form) are absolutely required for autophagosome formation (55,65–67). The autophagosome fuses with the lysosome then forming autophagolysosome, eventually resulting in the degradation of the captured proteins or organelles by lysosomal enzymes (55,68,69). Once cells undergo autophagic cell death, an autophagosomal marker LC3-II increases from the conversion of LC3-I (70,71).

Our results demonstrated that the ANK-199 can induce the formation of autophagic vesicle (Fig. 4A) and acidic vesicular organelles (Fig. 4B). It also simultaneously enhances the protein level of autophagic proteins, Atg complex, beclin 1, PI3K class III and LC3-II (Fig. 5), and mRNA expression of autophagic genes Atg7, Atg12, beclin 1 and LC3-II (Fig. 6). More importantly, 3-MA, a specific inhibitor of PI3K kinase class III, can inhibit the autophagic vesicle formation induced by ANK-199 (Fig. 7). All of the above results support that ANK-199-induced cell death in CAR cells is mediated through the induction of autophagic death. This molecular signaling pathway induced by ANK-199 is summarized in Fig. 8.

However, ANK-199 treatment duration for CAR cells is 72 h. We cannot completely rule out the possibility that apoptotic cell death or other signaling pathways can be induced by ANK-199 for longer treatment time. A series of pterostilbene derivatives have been synthesized as less toxic anticancer candidates (30,40,72,73). ANK-199 is less toxic than pterostilbene (unpublished data). More importantly, ANK-199 has much less cytotoxicity in the normal oral cells (HGF and OK) than that in CAR cells (Fig. 3). This is a novel finding regarding that ANK-199 represents a promising candidate as an anti-oral cancer drug with low toxicity to normal cells. Results presented in this study show that ANK-199 may become a novel therapeutic reagent for the treatment of oral cancer in the near future (patent pending).

This study was supported by AnnCare Bio-Tech Center Inc. and a research grant from the Ministry of Health and Welfare, Executive Yuan, Taiwan (DOH101-TD-C-111-005) awarded to S.-C.K. 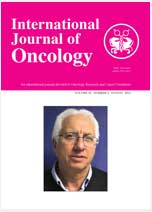