The major consequences of immune evasion of tumor cells are invasive growth and/or metastasis of tumor cells (16). Previous studies have shown that the degradation and destruction of the extracellular matrix and basement membrane of the tumor surface is the basis for tumor invasion and metastasis (17,18). Matrix metalloproteinases (MMPs) constitute a family of enzymes that are responsible for depredating the extracellular matrix and are closely related with tumor invasion and metastasis. MMP-2 and MMP-9 are two of the most important MMP proteins. MMP-9 degrades and destroys extracellular matrix and basement membrane near the surface of tumor cells, promotes generation of new blood capillaries, tumor growth and migration. MMP-2 degrades types IV, IV, VI and X collagen (19–22). Vascular endothelial growth factor (VEGF) is the most potent known angiogenic factor and plays an important role in the invasive growth and metastasis of many human malignancies (23–25). VEGF can be classified into seven subtypes, namely VEGF-A, VEGF-B, VEGF-C, VEGF-D, VEGF-E, VEGF-F and PIGF, among which VEGF-C is closely related to tumor invasion and metastasis. VEGF-C specifically binds to its cognate receptor on endothelial cells and facilitates mitotic proliferation of endothelial cells, enhances the permeability of blood vessels, changes gene expression in endothelial cells, and thus promotes the synthesis of MMPs (26–28). Therefore in this study, we directly measured the expression of VEGF-C, MMP-2 and MMP-9 in tumor cells to determine the invasion and metastasis state of tumor cells, to indirectly probe if tumor cells are capable of immune evasion.

Human bladder cancer cells (T24, 5637 and J82) were obtained from the China Academia Sinica Cell Repository, Shanghai, China. T24 and 5637 cell lines were maintained in RPMI-1640, J82 was maintained in MEM. Both media were supplemented with 10% heat-inactivated fetal bovine serum without antibiotics at 37°C in a humidified incubator with 5% CO2. All in vitro experiments were performed in triplicate.

The FAM-modified 2′-OMe-oligo-nucleotides were chemically synthesized and purified by high-performance liquid chromatography by Invitrogen. The sequence of the 2′-O-me-miR-221 inhibitor is: 5′-GAA ACC CAG CAG ACA AUG UAG CU-3′. The FAM-modified scrambled oligonucleotides are RNA duplexes with the following sequences: 5′-UUC UCC GAA CGU GUC ACG UTT/ACG UGA CAC GUU CGG AGA ATT-3′. FAM was attached to the 5′ end of each oligonucleotide. When cells were grown to 50–60% confluence, oligonucleotides transfection was performed using the Lipofectamine™ 2000 transfection reagent (Invitrogen, USA) according to the manufacturer’s instructions. At 6 h after transfection, the medium was replaced with fresh medium containing 10% fetal bovine serum. The experiments consisted of three groups: i) blank (without treatment), ii) negative control (transiently transfected with scrambled oligonucleotide), and iii) transfection of miR-221 inhibitor (transiently transfected with miR-221 inhibitor).

Cell viability was tested by 3-(4, 5-dimethyl-thiazol-2-yl)-2, 5-diphenyltetrazolium bromide (MTT) assay. Briefly, cells were seeded into 96-well plates at a density of 10,000 cells/well in 100 μl culture medium and cultured overnight before transfection. Cells received fresh medium at 6 h. After 24 h, 20 μl MTT (5 mg/ml dimethyl thiazolyl diphenyl tetrazolium, Sigma) was added into each test well and incubated for 4 h in the humidified incubator. Formazan crystals formed by viable cells were dissolved in 150 ml dimethyl sulf-oxide (Solarbio) and their absorbance values were measured at 490 nm. Wells without cells (DMSO alone) were used as a background control. The final optical density (OD) was calculated according to the formula: (final optical density = optical density of each group - optical density of DMSO group). Each test was performed daily for three consecutive days and repeated in five wells.

T24, 5637 and J82 cells were transfected for 24 h as described above. Total RNA was extracted using TRIzol (Invitrogen Life Technologies, Shanghai, China) according to the manufacturer’s protocol. RNA quality was determined by running a sample with RNA loading dye (Sigma-Aldrich) on a 1% agarose gel and inspecting for distinct 18S, 28S and total RNA bands which indicate a lack of degradation. The quantity of RNA was determined by A260 measurement.

For qRT-PCR, 1 μg total RNA was used in the Reverse Transcription System (Takara) according to the manufacturer’s instructions, and PCR was performed in the ABI PRISM® 7500 real-time PCR system (Applied Biosystems). The sequences of gene-specific primers are shown in Table I. The expression level of β-actin was used as internal control. All reactions were performed at least in triplicate.

The invasion assay was performed in 24-well transwell plates. Type I collagen was coated on the upper chamber to reconstitute the basement membrane. Three groups (transfection of miR-221 inhibitor, negative control and control) of cells (1×105 per well) were seeded on the upper chamber, and the lower compartment was filled with RPMI-1640 (T24 and 5637 cells) or MEM (J82 cells) containing 10% fetal calf serum. Cells were cultured for 24 h, fixed in 10% formaldehyde and stained with crystal violet staining, while the upper chamber cells were gently removed using cotton-tipped swabs. Five microscopic fields (×200) were randomly selected for cell counting. The experiment was repeated three times.

To evaluate cell apoptosis, singe cell suspensions were prepared for each experimental group, incubated with 5 μl FITC-conjugated Annexin V and 10 μl propidium iodide (PI) for 20 min at room temperature in the dark and were immediately analysed with a FACSCalibur flow cytometer (Becton-Dickinson, Franklin Lakes, NJ, USA). A minimum of 10,000 events were acquired for each sample.

Morphological signs of apoptosis were detected by using acridine orange-ethidium bromide (AO/EB) staining. The cells were treated as described above. AO/EB (Sigma) was freshly mixed at 0.01/100 (v/v) in dark, and one drop of the mixed solution was added to each well for 5 min. The apoptotic cells were then counted under an inverted fluorescence microscope (Eclipse TE300, Nikon, Japan). The death rate (%) was calculated as the percentage of positively stained cells, number of cells undergoing programmed cell death (PCD × 100/total number of cells. The experiments were repeated twice.

All data are presented as the average ± standard deviation (mean ± SD). All experiments were repeated three times independently, unless otherwise indicated. Statistical analysis was performed to determine the significance of the difference between groups using ANOVA (with post hoc Turkey’s honestly significant difference test). All statistical analyses were performed using SPSS 21.0 software for Windows, P<0.05 is considered as statistically significant.

Observation by fluorescence microscopy performed 5 h after transfection showed that the transfection efficiency for T24, 5637, and J82 cells were 80, 8 and 90%, respectively (Fig. 1). The miR-221 inhibitor was transfected into bladder cancer T24, 5637 and J82 cells. The cell viability was determined at 24 h, 48 and 72 h. Cell proliferation was inhibited in a time-dependent maner, but to varying degrees in the three tested lines. In addition, the rate of inhibition of cell proliferation increased with increasing time (P<0.05, vs. control group, Fig. 1D).

Results from qRT-PCR showed that after miR-221 expression was inhibited in the three bladder cancer cell lines, PUMA and Bax mRNA levels were significantly induced, while mRNA of the anti-apoptotic Bcl-2 was significantly reduced when compared to the blank group (P<0.05, Fig. 2).

After inhibiting the expression of miR-221 in three bladder cancer cell lines, proteins of PUMA and Bax were significantly devated, while Bcl-2 protein was significantly reduced when compared with control group (P<0.05, Fig. 3).

Apoptosis is a process of programmed autonomous cell death. It is induced by a variety of factors inside and outside the body and is controlled by strict and complex regulation of signaling networks (30–32). Currently, three pathways of cell apoptosis have been characterized. The first is the intrinsic apoptotic pathway, namely the mitochondrial apop-totic pathway, in which the intracellular signal transduction involves the interaction of pro-apoptotic factors and the anti-apoptotic Bcl-2 protein family. The second apoptosis pathway is the endoplasmic reticulum signaling pathway, which does not yet have a clear mechanism. The third apoptosis pathway is the extrinsic apoptosis pathway, also termed as dead receptor pathway, which induces apoptosis by activating the corresponding ligands and initiating the death receptors on the cell surfaces (33–38). The three pathways are interrelated. For instance, the extrinsic apoptotic pathway can activate the mitochondrial apoptotic pathway by activation of Bid (39).

PUMA was first reported by Nakano in 2001 (74) as a member of the BH3-only subfamily in the Bcl-2 family. It is a pro-apoptosis factor. The pro-apoptosis function of PUMA mainly depends on its BH3 domain and the orderliness and integrity of the 43 amino acid residues at its C-terminus (34,39–41). Previous studies have shown that the pro-apoptotic mechanism of PUMA acts through various mechanisms, ultimately causing depolarization of the mitochondrial membrane potential and initiating the mitochondrial apoptosis pathway. This results in the release of cytochrome c and Smac/DIABLO into the cytoplasm and the activation of apoptosis (15,42–44). However, the expression of PUMA is regulated by transcription factors (p53, c-Myc and FoxO3a) as well as post-transcriptional regulation (miR-221/miR-222) (44–48).

There are seven VEGF isoforms, namely VEGF-A, VEGF-B, VEGF-C, VEGF-D, VEGF-E, VEGF-F and PIGF (50). VEGF-C plays an important role in the regulation of tumor metastasis and infiltration. Previous studies have shown that VEGF-C is a protein precursor that must be activated by converting enzyme (proprotein convertases, PC) 5 and 7 (51,52). The associated receptors of VEGF-C include VEGFR-2, VEGFR-3 and Nrp-2, among which VEGFR-3 is the receptor that promotes lymphangiogenesis and tumor cell migration, invasion and metastasis. Study of Nrp-2 has suggested that Nrp-2 only plays a regulatory role and is not a necessary receptor during lymphangiogenesis (53–57). In human tumors, abnormal VEGFR-3 expression has been found in gastric cancer (58), lung cancer (59), colorectal cancer (60,61), head and neck cancer (62), bladder cancer (63), and breast cancer (64). Based on these previous studies, we confirmed that VEGF-C overexpression in tumor cells is the premise and one of the early events of tumor cell microme-tastasis into the lymph node. Studies on immune evasion have confirmed that VEGF-C is a potent immunosuppressive factor, which not only impedes immune cells from recognizing tumor cells, but can also destroy the biological functions of immune cells (65). In this study, after transfecting miR-221 inhibitor into T24, 5637 and J82 bladder cancer cells, VEGF-C mRNA and protein expression levels decreased significantly. It remains to be further studied whether this phenomenon is due to the upregulation of pro-apoptotic genes PUMA and Bax, the downregulation of anti-apoptotic Bcl-2, or other mechanisms, but it is clear that miR-221 did not directly regulate the effects of VEGF-C. Taken together, decreased miR-221 in bladder cancer reduces the effects of VEGF-C in promoting the formation of microlymphatic vessels and capillary vessels at tumor sites, as well as the ability of VEGF-C to inhibit immune cell activity.

There are many members in the family of MMPs, among which MMP-2 and MMP-9 are closely associated with tumor invasion and development. Their main mechanism of action include: i) MMP-2 and MMP-9 degrade the extracellular matrix and basement membrane and destroy cell structure. In addition, MMP-2 has the potential capability to activate extracellular matrix structural proteins and plays an important role in the chemotaxis of inflammatory cells as well as the spontaneous stimulation of tumor cells for migration and invasion; ii) MMPs promote tumor angiogenesis. As blood vessel formation is a prerequisite for the tumor cell growth, metastasis and invasion, MMP-2 promotes angiogenesis after interacting with their corresponding substrates. At the initial stage of tumor angiogenesis in tumor nodules, MMP-2 secretion is essential for tumor cells (66–70). In this study, after transfecting miR-221 inhibitor into bladder cancer T24, 5637 and J82 cells for 48 h, we found that both the mRNA and protein levels of MMP-2 and MMP-9 decreased. Although we only detected total MMP-2 and MMP-9 protein, rather than their phosphorylated isoforms which are the activated forms, our Transwell results indicate that cancer cell invasiveness was significantly decreased after reducing miR-221. Furthermore, MMP-2 and MMP-9 are closely related to tumor cell invasion (71–73). Therefore, the overexpression of MMP-2 and MMP-9 in bladder cancer is likely an important factor for the invasion and metastasis of bladder cancer cells. 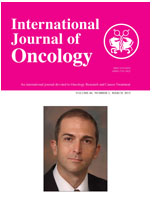