Hepatoid carcinoma of the ovary: A case report and review of the literature

Hepatoid carcinoma of the ovary is a type of tumor resembling hepatocellular carcinoma that arises from the ovary. Hepatoid carcinoma patients are predominantly elderly females ranging between 35 and 78 years of age, with an average age of 56 years. It was suggested that, microscopically, bile canalicular structures are rare, but among nine cases examined for bile canalicular structures, four demonstrated a positive result. Here, we report a case of a 55‑year‑old female who presented to the Second Xiangya Hospital, Changsha, China, with lower abdominal pain, abdominal distention and increasing abdominal girth. The patient underwent total hysterectomy, bilateral salpingo‑oophorectomy, omentectomy, tumor debulking and postoperative chemotherapy. A mass in the left ovary measuring approximately 11 cm in diameter was identified. Microscopic and immunohistochemical results suggested that it was a hepatoid carcinoma of the left ovary.

Hepatoid carcinomas are a rare group of tumors resembling hepatocellular carcinoma; however, they arise outside the liver and may be identified in the lung, stomach, kidneys, ovary, pancreas, urinary bladder and renal pelvis (1). They demonstrate hepatic differentiation and produce α-fetoprotein (AFP). Hepatoid carcinoma of the ovary (HCO) was first reported in 1987 by Ishikura and Scully (2). They described five cases of ovarian carcinoma with hepatic differentiation, of which three were confirmed to be primary and two were suspected to be primary. Most patients are postmenopausal with non-specific signs and symptoms.

Here, we report a case of HCO in a 55-year-old female, and summarize the characteristics, therapies and prognosis of cases that have been previously reported. The study was approved by the Ethics Committee of Second Xiangya Hospital, Central South University, Changsha, China. Informed consent was obtained from the patient.

A 55-year-old postmenopausal female, G2P2, presented with lower abdominal pain, abdominal distention and increasing abdominal girth for approximately two months. The patient had no familial history of inherited disease. On physical examination the patient had abdominal distention, left upper and lower quadrant pain, and no hepatosplenomegaly or lymphadenopathy. A left ovarian tumor approximately 11 cm in diameter was palpable. Biochemical examinations revealed normal renal and liver functions, an elevated α-fetoprotein (AFP) level of 248.84 ng/ml (normal <20 ng/ml), an elevated cancer antigen (CA)-125 level of 168.27 KU/l (normal <35 KU/l), and normal carcinoembryonic antigen (CEA) and β-human chorionic gonadotropin (β-HCG) levels. An X-ray examination of the chest revealed a blunt bilateral costophrenic angle. A computed tomography (CT) scan revealed massive ascites and omental and peritoneal implants, and the liver, gallbladder, pancreas, spleen, kidneys and adrenal glands were all normal in size and texture. Upon primary diagnosis of stage IIIC poorly differentiated adenocarcinoma, the patient underwent an exploratory laparotomy with total hysterectomy, bilateral salpingo-oophorectomy, omentectomy and tumor debulking. The ascites were approximately 3 liters in volume. Numerous tumor nodules were identified on the pelvic peritoneum, omentum majus and mesentery, with the largest nodule approximately 5x6 cm in diameter. No abnormalities were observed in the liver, spleen, kidneys, stomach or diaphragm. The left ovary had enlarged to 11x8x7 cm, and the cut surface was solid and red-yellow in color with focal hemorrhaging and necrosis. Nitrogen mustard (2%) was used to wash the abdominal cavity and kill the residual cancer cells. Microscopically, the tumor cells, which were uniform in size and shape, contained abundant amounts of eosinophilic cytoplasm and had distinct cell borders resembling hepatocellular carcinoma (Fig. 1). Immunohistochemical staining revealed that AFP (Fig. 2), cytokeratin (CK) and CK18 were positive, while α-inhibin, CK5, CK6, CD30, PLAP, HPC, CA-125, PR, ER and OCT3/4 were negative.

On postoperative day 6 an X-ray examination of the chest was conducted and compared with the X-ray taken prior to the surgery. An irregular shaped high-density mass approximately 4 cm in length was identified under the left diaphragm. Upon diagnosis of a metastatic tumor using needle puncture biopsy, the patient was administered chemotherapy (docetaxel 120 mg and nedaplatin 80 mg) on postoperative day 10. The patient received six cycles of the same chemotherapy regimen for 10 months, and to date, no signs of recurrence have been observed.

HCO is a rare ovarian malignant tumor whose features resemble hepatocellular carcinoma. The two basic diagnostic criteria are abundant eosinophilic cytoplasm of the tumor cells that resemble hepatocellular carcinoma, and positive immunohistochemical AFP staining (2). HCO has been known for 25 years, but to date, only 24 cases have been reported (1–19). The clinical features are listed in Table I and II.

The origin of HCO is unknown. The majority of patients are postmenopausal females; however, it may also affect females of reproductive age and it has been identified in patients between the ages of 35 and 78 years. The most common signs and symptoms of HCO are abdominal distension, abdominal pain and pelvic mass. All patients reported in this study presented with an elevated serum AFP (16/16) level and the majority of patients had an elevated CA-125 (12/15) level. HCO cases may occur alone or in combination with other types of ovarian tumor, including serous papillary carcinomas (6), mucinous/serous/endometrioid denocarcinomas (11) or Sertoli-type sex cord-stromal tumors (17). The tumor differentiates poorly and progresses rapidly. When diag-nosed, the FIGO stage is usually advanced. Of the reported cases, 14 cases were stage III, three were stage II B, six were stage I and the remaining two were of unknown stage. Patients usually succumb to the disease within 2 years (1).

The tumor may appear solid, or solid with cystic areas and multiple foci of hemorrhaging and necrosis. Microscopically, HCO tumor cells are usually uniform in size and shape with distinct borders. They also consist of a moderate to abundant eosinophilic cytoplasm, centrally located nuclei arranged in sheets, nests or trabeculae, and cytoplasm periodic acid-Schiff (PAS)-positive hyaline globules, while bile canalicular structures are rare. In previous studies, HCO revealed PAS-positive diastase-resistant hyaline globules to varying degrees in each of the 18 cases described. Among the nine patients that were examined for bile canalicular structures, four revealed positive results; therefore, we do not consider this to be a rare characteristic of HCO. Electron microscopy identified abundant mitochondria that possess lamella cristae with one or more electron-dense matrix granule, distended smooth endoplasmic reticulum-formed vesicles, a tight junction with few desmosomes and no microvilli, a rudimentary canaliculi, occasional lipid droplets and an inconspicuous golgi body and rough endoplasmic reticulum (14). During immunostaining, AFP, which is the hallmark of the tumor, was positive in all cases. The existence of CEA (1,2,8,10–13,15,16), α1-AT (1,2,8,10,15–17) and α1-ACT (2,8,13) was demonstrated. CK18, which is positive in normal hepatocytes, bile duct epithelium and hepatocellular carcinoma, is also focally positive in HCO. CK19 and CK20, which are commonly positive in normal gastrointestinal epithelial cells, bile duct cells and certain adenocarcinomas, including ovarian surface epithelial carcinomas, but negative in normal hepatocytes and hepatocellular carcinomas, may occasionally be positive in HCO. CK7 was positive in certain cases (8,12,14), and a diffusely positive staining for CK7 is considered to be highly consistent with HCO (14). The expression profiles of CK reflect the origin of HCO (11), and the degree of staining of hepatocyte paraffin (Hep Par) 1 may be related to the differentiation of the tumor.

The most effective way to manage HCO remains unknown. In almost all cases in this report, the patients received a hysterectomy, bilateral salpingo-oophorectomy, with or without lymph node dissection, and/or omentectomy. The majority of patients received postoperative chemotherapy with or without irradiation, but the prognosis is poor. A total of seven (1,2,4,7,8) out of nine patients were followed up until mortality; 7 succumbed within two years, while the other two patients (2,9) succumbed within five years. Pandey et al (18) reported that sorfenib, a first line drug for hepatocellular carcinoma, administered postoperatively, had no effect on HCO therapy.

Firstly, HCO must be distinguished from hepatoid yolk sac tumors (HYST), a tumor with hepatoid differentiation and regarded as a germ cell tumor of yolk sac type. HYST (16) occurs mainly in the younger population (range, 7–54 years; average, 22 years) and is associated with gonadal dysgenesis and dysgerminoma. HCO usually occurs in the older population (range, 35–78 years; average, 56 years) and is associated with normal gonad development. Immunostaining revealed that HYST is negative for Hep Par 1 and focally positive for polyclonal CEA (pCEA), while HCO is positive for Hep Par 1 and diffusely positive for pCEA. HCO also needs to be distinguished from other ovarian tumors, including undifferentiated carcinomas, steroid cell tumors, clear cell carcinomas and endometrioid carcinomas. Although they may possess features resembling HCO, none of these tumors demonstrate AFP staining except in one case of endometrioid carcinoma where transformation of an endometrioid carcinoma to a yolk sac tumor occurred (19). Ovarian metastatic hepatocellular carcinoma should also be excluded, although to date there is no means of distinguishing between the two tumors (14).

Our patient presented with HCO in middle age. The lack of lesions in the liver made the diagnosis of ovarian metastatic hepatocellular carcinoma unlikely. Positivity for AFP excluded the diagnosis of undifferentiated carcinomas, steroid cell tumors, clear cell carcinomas and endometrioid carcinomas. The elevated serum CA-125 levels, common epithelial origin of hepatoid carcinomas, lack of gonadal dysgenesis or dysgerminoma, and positive Hep Par 1 ruled out a diagnosis of HYST. A short time after surgery, the tumor metastasized to the left diaphragm. The reasons for this are unknown as this has not been previously observed. We decided to administer chemotherapy on postoperative day 10, by which time the condition of the patient had improved from the surgery. An early start of therapy was beneficial to treatment, and at present, the patient lives a relatively healthy life.

In conclusion, HCO is a highly malignant tumor that mainly affects elderly females and progresses rapidly. The signs and symptoms are non-specific, and the treatments, which include surgery, chemotherapy and radiotherapy, are similar to those of other ovarian carcinomas. With these therapies, patients may live a longer life, but most of them succumb within 2 years. Therefore, a new therapeutic method should be identified. The use of nitrogen mustard during the surgery and the early start of postoperative therapy may prolong survival and improve quality of life. 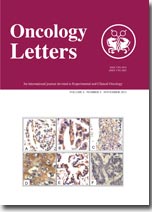