Carboxymethyl-glucan (CM-G) is a water-soluble derivative of β(1-3)(1-6) glucan that is well known for its immunostimulant and hematopoiesis-enhancing activities. In this clinical trial, we assessed the effects of oral CM-G administration on the peripheral blood cells of patients with advanced prostate cancer, and examined its ability to alter hepatic and renal function. After CM-G administration, the total leukocyte count increased significantly (p≤0.02), with no associated changes in the lifestyle habits of the patients. A significant increase (p≤0.001) was also observed for red blood cell, hematocrit, hemoglobin and platelet counts. No changes were observed in hepatic or renal function after CM-G administration, and no side effects associated with its use were recorded. These results suggest that using CM-G as an adjuvant to cancer treatment may improve the health parameters of prostate cancer patients.

The β-glucans are of particular interest to researchers because they are naturally occurring glucose polymers, are orally active when taken as food supplements, and have a long track record of safe use. Due to their immunomodulatory properties, purified β-glucans have been used clinically as part of a combination therapy for a variety of cancers (1).

Carboxymethyl-glucan (CM-G) is a water-soluble derivative of the Saccharomyces cerevisiae cell wall β(1–3)(1–6) glucan. It is classified as a biological response modifier and is well known for its immunomodulatory and hematopoiesis-enhancing activities (2–4). Several experimental studies in vivo have shown that β-glucans administered orally, intravenously or enterally enhance hematopoietic regeneration without side effects (5–8).

While a man with localized prostate cancer is more likely to die from comorbidities, the probability of death from prostate cancer exceeds other causes when clinical metastases occur. Metastatic prostate cancer remains incurable, and it is known that many parameters of immunity decline with age (10). At this stage, the medical goals are to increase the short survival period of the patients and, above all, to improve their quality of life, which often declines as the disease progesses.

Considering the beneficial properties ascribed to CM-G and its potential use as an adjuvant to cancer treatment, we assessed in vivo the effects of oral CM-G administration on the peripheral blood cells of patients with advanced prostate cancer (PCa) and on alterations in hepatic and renal functions.

This study was conducted with the approval of the Committee on Ethical Research Involving Human Beings of the University of Londrina and the Northern State of Paraná University Hospital. CONEP 268 and 212/07 for this project are available under registration no. 0214.0.268.000-07 at the National Information on Ethics in Research Involving Human Beings, Brazil (SISNEP). Patients at the Londrina Cancer Institute with a histological diagnosis of stage T3 (n=15) and T4 (n=15) prostate adenocarcinoma according to TNM staging (www.cancerstaging.org) and undergoing androgen deprivation therapy (ADT) with goserelin acetate or leuprolide were included in this study after giving written informed consent. The age of the patients ranged from 52 to 84 years, with a median age of 69 years. The ADT treatment duration ranged from 5 to 36 months. Among the 30 patients studied, 9 underwent radiation before ADT, 8 were smokers and 8 consumed alcohol regularly. During the 28-day treatment, patients were contacted weekly in order to to monitor their conditions and to receive reports of any adverse effects associated with the CM-G treatment.

Soluble β-glucan in the carboxymethylated (CM-G) form was obtained from the cell wall of Saccharomyces cerevisiae, according to the protocol described by Magnani et al (11). The CM-G was distributed into gelatin capsules containing 20 mg of CM-G with starch as an excipient vehicle. This procedure was carried out under medical request by Vico Farma®, which is registered at the National Health Surveillance Agency (ANVISA) in Brazil under no. 136420-0.

The results obtained before and after CM-G treatment for each patient were analyzed using the Wilcoxon signed-rank test and the t-test for dependent paired samples. p≤0.05 indicated significant differences.

After CM-G administration, the total leukocyte counts increased significantly (p≤0.02), averaging a 10.64% increase. In the differential count, an increasing trend for typical lymphocytes, monocytes and neutrophils was observed (Fig. 1). The lifestyle habits of patients, such as smoking and alcohol use, were not associated with increased leukocytes.

The leukocyte counts carried out before CM-G administration showed that no patients had leukopenia. However, leukocyte levels closer to the minimum reference value (3,500/mm3) were observed among patients who had received radiation. For these patients, CM-G administration resulted in an 11% increase in the values.

There were no significant changes in VCM, HCM, CHCM and RDW; however, the platelet counts increased significantly after treatment with CM-G (p=0.007).

No changes in kidney and liver function were found in associaion with CM-G administration (Table I), and no CM-G-related side effects were observed.

Results of liver and kidney function tests performed before and after carboxymethyl-glucan (CM-G) administration for 28 days in patients with advanced prostate cancer.

CM-G stimulates retioculoendothelial system function and modulates cellular and humoral immunity (2,13,14). In its soluble form, β-glucan acts synergistically with in vivo myeloid growth factors, improving hematopoietic recovery and mobilizing progenitor cells in the peripheral blood (14). According to Rice et al (15), orally administered soluble derivatives of β-glucan are absorbed through the gastrointestinal wall and pass into the circulation system, activating immune pathways such as Dectin-1, CR-3, SIGNR1, TLR-2/6 and -4 (16).

Cancer-induced immunosuppression is a well-known phenomenon (12), but was not observed among the patients in this study. However, the standard treatment for advanced PCa is hormone therapy (17) and not chemotherapy, which is usually associated with leukopenia. By contrast, low white blood cell counts were observed prior to CM-G treatment in patients who had received radiation therapy. CM-G has proven effective in stimulating hematopoiesis after repeated doses of radiation, and in increasing granulocytes and other hematopoietic indices (18). Several experimental models have demonstrated the ability of β-glucans and derivatives administered by different routes to raise blood cell counts after leukopenia caused by cancer treatments (2,6,19).

The increase in leukocyte counts reported in this study supports the findings of Weitberg et al (20) regarding increases in white blood cells after oral β-glucan administration, and those of De Felippe et al (5), who found an increase in leukocytes at the expense of neutrophils, lymphocytes and monocytes on the fifth day of intravenous treatment. By contrast, Demir et al (12) observed no changes in leukocyte counts after 14 days of oral β-glucan administration. Although only the increase in leukocytes was significant in the present study, typical lymphocytes, monocytes and neutrophils clearly showed an increasing trend with CM-G treatment.

In the present study, no side effects associated with the ingestion of CM-G were observed. These results are in agreement with the findings of Demir et al (12), who observed no adverse effects of the daily oral administration of 20 mg of soluble β-glucan from S. cerevisiae for 14 days in 20 patients with metastatic breast cancer. Weitberg (20) administered 15 mg of oral β-glucan daily to 20 patients with various types of advanced cancer for 6 months and also found no side effects.

The absence of a significant variation in the results of hepatic and renal function tests before and after CM-G treatment (Table I) are in agreement with the findings of De Felippe et al (5), who treated 11 septic patients with 100–240 mg of β-glucan from S. cerevisiae for 8 days.

Smoking is associated with increased numbers of leukocytes (21). This association was not observed among the smokers in this study, who showed no difference before or after CM-G administration compared to non-smokers.

After 28 days of treatment with CM-G, a significant increase in red blood cell, hemoglobin and hematocrit levels was confirmed. Previous studies have reported that β-glucan acts directly on the myeloid progenitors, which contribute to hematopoietic regeneration (2,22). Increased levels of hemoglobin in cancer patients treated with oral β-glucan have been reported by Wietberg (20). Moreover, Demir et al (12) found no significant differences in the hematocrit count after treatment with β-glucan.

Ever closer to clinical practice, the use of β-glucan as an adjuvant has been used effectively for decades in Japan, improving the quality of life of cancer patients and reducing side effects (23). The results of this study suggest that the use of CM-G may enhance the hematologic parameters of patients with prostate cancer, benefiting the body weakened by the disease and its treatments.

The authors thank the National Council for Scientific and Technological Development (CNPq-Brazil) for financial support in the form of a doctorate scholarship to M.M. 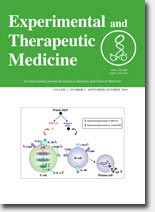