Carcinogenesis is considered to be a multi-stage process involving the initiation, promotion and progression of tumor cells, which may arise as a result of DNA damage, mutations, clonal expansion of preneoplastic cells and dysregulation of oncogenes and/or tumor suppressor genes.

Embryonic stem cells (ESCs) have self-renewal potential and may be differentiated into lineage-specific cell types, including hepatocytes (1). In the liver, stem cells are located in the ductal plates in fetuses and neonates and in the canals of Hering in infants and adults (2). As stem cells have the potential to survive, DNA damage induced by carcinogens may remain as cell proliferation occurs. Furthermore, stem cells with a loss of DNA repair function may be susceptible to malignant transformation, either directly or through the emergence of cancer-prone stem cells (3). Cell proliferation at the time of carcinogen exposure may be pivotal for the fixation of genotoxic injury as a heritable form (4).

It has been proposed that hepatocellular and ductal carcinomas originate from liver stem cells and that enzyme-altered foci and nodular changes are adaptive non-oncogenic responses to the toxic effects of carcinogens (5). Liver tumors appear to be hierarchically organized and sustained by a distinct subpopulation of cancer stem cells (6). This suggests that stem cells have a significant role in hepatocarcinogenesis.

As a putative stem cell marker, the epithelial cell adhesion molecule (EpCAM) is a membrane glycoprotein highly expressed on the majority of cancer cells (7), although it is also expressed on the majority of normal epithelial cells. In humans, EpCAM-positive hepatocytes have been found to be rare in the early stages of liver disease. However, they became increasingly prominent during the later stages and are consistently arrayed around the periphery of cords of keratin 19-positive hepatobiliary cells in the ductular reaction (8). Human EpCAM-positive hepatocellular carcinomas (HCCs) exhibit a distinct molecular signature with the features of hepatic progenitor cells (HPCs), including the presence of known stem cell/progenitor cell markers, including cytokeratin 19 and c-Kit, whereas EpCAM-negative HCCs exhibit a gene expression profile with the features of mature hepatocytes (9). Thus, EpCAM expression may be elevated during human liver tumor progression.

EpCAM expression in mouse liver carcinogenesis has not yet been reported. In the present study, we investigated the expression of EpCAM in diethylnitrosamine (DEN)-induced hepatic tumors. DEN is widely used in mouse liver cancer models (10) and has been used in several mouse strains (11–14). Based on the finding that young animals treated with DEN exhibited a higher incidence of liver tumors than older animals (15), we also assessed the effects of DEN on the expression of EpCAM and proliferating cell nuclear antigen (PCNA) in hepatic cells. The assessment was carried out at various developmental stages, from ESCs to HPCs and hepatocyte-like cells (HCs).

ICR mice (Koatec Inc., Pyungtaek, Korea) were housed in a room maintained on a 12 h light/dark cycle and at a constant temperature and humidity. The mice were allowed free access to a pellet chow diet (Koatec Inc.) during the experiment. Male mice were bred with females, yielding the F1 generation. Male F1 mice at 14 days of age were injected intraperitoneally with DEN (10 mg/kg body weight; Sigma, St. Louis, MO, USA) dissolved in 0.9% saline. Ten mice treated with DEN were sacrificed 36 weeks later and hepatic masses were sampled for histopathological examination.

The hepatic masses (n=71) were fixed in 10% neutral phosphate-buffered formalin, embedded in paraffin, sectioned to a thickness of 4 μm and stained with hematoxylin and eosin. Tumor characteristics were classified based on histopathological and cytological criteria.

The avidin-biotin complex method was used to stain EpCAM in 4-μm sections of liver tissues. The sections were dewaxed in xylene, hydrated using a graded ethanol series and boiled in sodium citrate buffer (pH 6.0) in an autoclave for 20 min. Then, they were sequentially treated with 0.3% hydrogen peroxide, blocking buffer containing skimmed milk and the anti-EpCAM antibody (ab32392; Abcam, Cambridge, MA, USA; diluted 1:400). The sections were washed with TBS-T and subjected to the ABC-peroxidase procedure (ABC kit; Vector Laboratories, Burlingame, CA, USA). As a negative control, skimmed milk was used instead of the primary antibody.

The immune complexes were visualized using the chromogen 3,3′-diaminobenzidine tetrahydrochloride (DAB). The sections were counterstained with hematoxylin to facilitate their examination under a light microscope.

Double staining of EpCAM and PCNA in hepatic tumors

The sections were dewaxed in xylene, hydrated using a graded ethanol series and boiled in a sodium citrate buffer (pH 6.0) in an autoclave for 20 min. Then they were sequentially treated with 0.3% hydrogen peroxide, blocking buffer containing horse serum and anti-PCNA antibody (M879; Dako, Carpinteria, CA, USA; diluted 1:500) for 1 h. The sections were washed with TBS and incubated with HRP-polymer (MRT621; Biocare Medical, Concord, CA, USA). The immune complexes were visualized using DAB.

For concomitant labeling of EpCAM, the sections were washed with TBS, blocked with goat serum, incubated with anti-EpCAM antibody (ab32392, Abcam) for 1 h and then incubated with AP-polymer (RMR625; Biocare Medical) for 30 min. The sections were washed with TBS, treated with Vulcan Fast Red (FR805H; Biocare Medical), washed again with TBS, counterstained with hematoxylin and viewed under a light microscope.

Culture of mouse ESCs and differentiation of hepatic lineage cells

To differentiate the ESCs into hepatic lineage cells, we used the culture conditions for differentiating ESCs into HPCs and HCs reported by Zhou et al(16).

To determine a non-cytotoxic concentration of DEN, ESCs were treated with DEN at concentrations of 0–90 mM for 24 h. Cell viability was estimated by 3-(4,5-dimethylthiazol-2-yl)-2,5-diphenyltetrazolium bromide (MTT) assay and the fluorescence intensity was analyzed using an ArrayScan VTI HCS Reader (Thermo Scientific, Rockford, IL, USA). Subsequently, ESCs (day 0), HPCs (day 22 of differentiation) and HCs (day 40 of differentiation) were treated with four concentrations of DEN (0, 1, 5 and 15 mM; G1, G2, G3, G4, respectively) for 24 h.

EpCAM and PCNA mRNA expression in ESC, HPCs and HCs

The following PCR conditions were used: initial activation of uracyl-N-glycosylase at 50°C for 2 min; activation of AmpliTaq Gold at 95°C for 10 min; and 45 cycles of denaturation at 95°C for 15 sec and annealing/extension at 60°C for 1 min. During PCR, the amplified products were continuously monitored by measuring the fluorescence emission. All PCR assays were performed in triplicate.

Histo-pathological examination of the 71 hepatic masses showed that 48 samples were adenomas and 23 were adenocarcinomas. The tumor tissues exhibited nuclear pleomorphism and alteration of cellular structure, with or without fatty liver and inflammatory cell infiltration.

EpCAM was immunohistochemically detected mainly in hepatic tumor cells, with some expression in the surrounding visually normal cells, and exhibited a cytoplasmic staining pattern (Fig. 1). EpCAM expression was similar in benign and malignant tumors.

Double staining of EpCAM and PCNA

EpCAM and PCNA mRNA expression in ESCs, HPCs and HCs

Previously, EpCAM was identified as an additional marker of cancer-initiating cells (7) and it was detected in the cytoplasm of hepatic stem cells and in the plasma membranes of hepatoblasts (2). EpCAM-positive cells in the rat liver were shown to be bipotential adult hepatic epithelial progenitors (17). These findings indicate that EpCAM may be involved in the early stages of liver carcinogenesis.

To investigate the role of EpCAM in cancer initiation, we examined its expression in hepatic cells at various stages of differentiation. Hepatic differentiation of mouse ESCs may be induced in a stepwise manner by adding several specific growth factors following embryoid body formation (18) and functional hepatocytes may be generated using chemically defined culture conditions (19). In the present study, mouse NVRQS-11F ESCs were efficiently differentiated into hepatic lineage cells, HPCs and HCs. This multi-step generation of HCs from ESCs resembles in vivo hepatogenesis and ESC-derived hepatogenesis may be useful as a novel integrative model for hepatocarcinogenesis or for the hepatic toxicity evaluation of a number of chemicals.

Notably, DEN treatment increased PCNA expression at days 0 and 22, but not at day 40. This may be significant, since any proliferative cell in the liver may be susceptible to neoplastic transformation at the time of carcinogen exposure. As there was a time lag between increased EpCAM expression and cell proliferation, additional stem cell proteins may be involved. Further studies are also warranted to investigate the role of other stem cell markers in the context of hepatocarcinogenesis.

It has been hypothesized that stem cells and/or progenitor cells are transformed into cancer stem cells (20) by a process involving the dysregulation of stem cell self-proliferation (21). Considering that the induction of hepatic tumors by DEN treatment in animals was dependent on age at carcinogen treatment (22), there may be more hepatic stem and/or progenitor cells in young animals. Generally, compared with older animals, young animals are more sensitive to chemical-induced carcinogenesis (23). Hepatic tumors have been generated in young animals upon the administration of only a single injection of DEN (22) and ∼1% of cells treated with a tumor promoter developed into altered hepatic foci (24).

In the present study, low-dose DEN treatment decreased cell proliferation at day 40. Although it is not known why cell proliferation was not observed at day 40 following middle- and high-dose DEN treatment, it may be that the differentiation stage of hepatic cells is a significant factor in cellular proliferation caused by carcinogen treatment. Further studies are required to investigate the effects of various hepatocarcinogens on hepatic cells at various stages of differentiation.

In summary, EpCAM and PCNA expression was increased in DEN-induced tumors and the expression of EpCAM and PCNA in ESCs, HPCs and HCs was modulated by DEN treatment. This study contributes to cancer research by clarifying EpCAM expression in hepatic tumors and during the early stages of hepatocarcinogenesis.

The authors would like to thank Ms. He Jin Jung, Sung Chan Kim, Ji Ae Seo and Eun-Joo Park for their technical assistance. This study was supported by the Basic Science Research Program through the National Research Foundation of Korea (NRF) funded by the Ministry of Education, Science and Technology (2010-0003829). 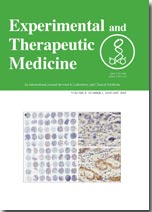