Prostate cancer is the most frequently diagnosed non-cutaneous male malignancy and the third leading cause of cancer-related death in men in most western industrialized countries (1). Since it is estimated that around 660,000 men worldwide will be diagnosed with prostate cancer it will remain a major health problem in coming years (1). Despite an initial efficacy of androgen deprivation therapy, most patients with prostate cancer progress within 2 years from androgen-dependent status to hormone-refractory prostate cancer, for which there is no curative therapy. Androgen receptor (AR) signaling plays a key role in the development of hormone-refractory prostate cancer. AR, a member of the steroid receptor superfamily, is a ligand-dependent transcription factor that mediates androgen action in cells. AR is composed of three major domains: an NH2-terminal transcriptional activation domain (NTD), a central DNA-binding domain, and a COOH-terminal ligand-binding domain (LBD) (2,3). AR is associated with cellular chaperones in the cytosol in its inactive state (4). After binding to androgens, such as testosterone and, more potently, dihydrotestosterone (DHT), AR translocates to the nucleus, binds to the androgen response elements of AR target gene promoter, and regulates expression of AR target genes (2,5). AR hypersensitivity, as a result of AR gene mutation and/or amplification, overexpression of coactivators, and AR cross-talking with other signal transduction pathways, often occurs and plays crucial roles in prostate cancer development, progression, and androgen-independent growth. In other words, AR and its signaling axis are the most important targets for therapies against advanced prostate cancer (5–7). Therefore, finding novel and more effective inhibitors of AR signaling is of great interest.

In this study, we hypothesized that shikonin may have a role as an inhibitor of AR signaling and, thus, could serve as a therapeutic agent for the management of human prostate cancers. We report strong anti-AR activity of the natural product shikonin in prostate cancer cells. Shikonin markedly decreased expression not only of AR, but also PSA, a widely used serologic marker for prostate cancer burdens and an indicator of therapeutic efficacy and recurrence (16), and inhibited growth of AR-positive human prostate cancer cells. We propose that shikonin is a good candidate for use as an anticancer drug in chemoprevention and treatment of hormonal-responsive prostate tumor cells.

LNCaP and 22RV1 prostate cancer cells were maintained in RPMI-1640 supplemented with 10% FBS and 1% penicillin/streptomycin antibiotics.

Following reagent treatments, cells were washed twice with 1X PBS and cell extracts were prepared using RIPA buffer (1X PBS, 1% NP40, 0.5% sodium deoxycholate, 0.1% SDS containing an additional 100 μl of 10 mg/ml PMSF, and 1 tablet of the complete mini protease inhibitors). Protein content was quantified by the Lowry assay. Lysate proteins were resolved by SDS-PAGE and transferred onto a nitrocellulose membrane. The membrane was incubated with TBS buffer containing 0.1% Tween-20 and 5% skim milk, and then exposed to the desired primary antibody. After treatment with a proper secondary antibody, the immunoreactive bands were visualized by standard ECL method.

Total RNA isolation was performed with the use of the TRIzol (Invitrogen) according to the manufacturer’s protocol. The cDNA was synthesized with the use of 2 mg of total RNA through SuperScript reverse transcriptase (Bioneer, Daejeon, Korea) with oligo dT primers. PCR was done with a specific primer (AR sense 5′-ATGGTGAGCAGAGTGCCCTA-3′; antisense 5′-GTGGTGCTGGAAGCCTCTCCT-3′; GAPDH sense, 5′-GGCCTCCAAGGAGGAAGACC-3′; and GAPDH antisense, 5′-AGGGGTCTACATGGCAACTG-3′). GAPDH, a non-regulated housekeeping gene was used as an internal control to normalize input cDNA. RT-PCR was performed using the LightCycler 480 using SYBR green master mix (Roche). Each experiment was performed in three experimental replicates with three technical replicates within each experiment.

LNCaP and 22RV1 cells were transiently co-transfected with 0.5 μg ARE-, PSA-luciferase plasmid and 0.5 mg pSV-β-galactosidase reporter vector using Lipofectamine 2000 (Invitrogen) transfection reagent. After transfection for 24 h, cells were treated with shikonin for the described period. Cell extracts were prepared for the luciferase assays. The luciferase activity was normalized by β-galactosidase activity.

All proliferation assays were based on the MTT method. Cells were seeded in a 96-well plate, 1×104 cells per well. After 24–72 h, cells were treated with shikonin. At the end of the experiment, the media was removed and DMSO was added as MTT solubilization solution. Absorbance was measured at 550 nm.

AR is an important transcription factor that regulates expression of a variety of target genes that harbor the androgen response element (ARE) in their promoters (17,18). Therefore, we examined the effect of shikonin on the transcriptional activity of AR. LNCaP and 22RV1 cells were transfected with an ARE-containing promoter reporter gene. AR transactivation was determined using a luciferase assay in cells treated with or without shikonin. Shikonin decreased the luciferase activity in a dose-dependent manner (Fig. 4A). Cells treated with 4 μM shikonin showed ∼5-fold and 2.5-fold decrease in the AR transcriptional activity in LNCaP and 22RV1 cells, respectively. To further determine the inhibitory effects of shikonin on PSA gene transcription, the PSA promoter-driven luciferase reporter activity, was assessed in prostate cancer cells transfected with pGL3-PSA-luc. PSA promoter activity was reduced when the cells were treated with shikonin (Fig. 4B). These results indicated that the shikonin mediated decrease in AR protein level correlated with repression of its promoter activity.

To determine the effect of decreased AR transcriptional activity by shikonin, we examined the expressions of the AR target gene PSA (Fig. 5). LNCaP and 22RV1 cells were treated with shikonin and subjected to western blotting. The protein expression levels of PSA decreased in response to shikonin in a dose-dependent manner (data not shown). The expression of prostate specific antigen (PSA) has been used extensively as a marker of prostate cancer growth and is a well-known target gene of AR. These results indicate that shikonin decrease the transcriptional activity of AR leading to suppression of the target protein PSA expression.

Shikonin inhibits the growth of LNCaP and 22RV1 cells

AR is an important regulator of cellular growth in androgen-dependent prostate cancer cells. Shikonin suppresses AR expression at the transcriptional level and subsequently inhibits the transcriptional activity of AR, resulting in inhibition of cell proliferation in androgen-positive prostate cancer cells. Therefore, we next examined whether shikonin affects the growth of prostate cancer cells. LNCaP and 22RV1 cells were treated with or without 4 μM shikonin for 6 h and the levels of proteins involved in apoptosis were examined. Cells treated with shikonin increased cleavage of poly(ADP-ribose) polymerase (PARP) cleavage and decreased expression of the anti-apoptotic molecule Bcl-2 compared to cells without shikonin in both cell lines (Fig. 6A). We next examined the effect of shikonin on the growth of LNCaP and 22RV1 cells. Cell proliferation assays were determined using MTT analysis. As shown in Fig. 6B, the viability of prostate cancer cells treated with 4 μM shikonin for 24 h was reduced in a time-dependent manner to ∼50% of the viability of control cells. These data are consistent with the induction of apoptosis by the shikonin as indicated by the PARP cleavage in both LNCaP and 22RV1 cells treated with shikonin. Taken together, these results indicate that shikonin led to growth inhibition of AR-positive prostate cancer cells thereby suppressing the transcriptional and translational level of AR.

Prostate cancer is a leading cause of cancer-related deaths among men in the United States (19). The mechanism underlying the pathogenesis of prostate cancer is not fully understood, but age, race, dietary habits, and androgen secretion and metabolism are some of the risk factors associated with this malignancy (20). AR, a ligand-activated transcription factor belonging to the steroid receptor super-family, is critically involved in prostate cancer progression as well as maintenance of the male reproductive organ (17). Ligand-free AR predominantly resides in the cytoplasm complexed with chaperone proteins, including Hsp90, but in a conformational state responsive to ligand binding (17). Ligand-activated regulation of AR leads to its subsequence events such as nuclear translocation, dimerization, and binding to androgen response elements in the DNA of target genes (21). Moreover, AR is assumed to be a major molecule in the transition from hormone-sensitive to androgen-independent prostate cancer (22). It is hormone ablation therapy that is the main treatment for early-stage prostate cancer. However, this treatment leads to incurable and acute hormone refractory disease. Therefore, it is necessary for novel strategies to effectively eliminate AR signaling from prostate cancer for the clinical control of this lethal disease. Herein, the shikonin-mediated down-modulation in AR protein level correlates with a reduction in AR message as presented by reverse transcription-PCR and inhibition of AR promoter activity as revealed by the luciferase reporter assay, which is supported by the following observations: i) nuclear level of AR is markedly suppressed in the presence of shikonin in both LNCaP and 22RV1 cell lines; ii) shikonin treatment results in a critical decrease in expression levels of the AR-regulated target gene PSA; and iii) shikonin inhibits growth of LNCaP and 22RV1 cells in association with apoptosis induction.

Shikonin is the main component of Chinese herbal medicine Zi Cao (gromwell) that has antitumor activity (23). Although several in vitro molecular targets were found to be associated with shikonin-induced apoptotic cell death (14,24), the cellular target of shikonin is still unknown. Natural compounds might have multiple cellular targets in order to achieve their biological beneficial effects such as tumor growth inhibition (25).

In this study, we firstly describe that the AR is one of the targets of shikonin in vitro, inhibition of which leads to cell death in human prostate tumor cells, shikonin is highly effective in reducing the protein level of AR and the transcriptional activity of AR. Consequently, we suggest that shikonin has great potential to be used clinically for treatment of human prostate cancers.

This research was supported by the grant from Basic Science Research Program through the National Research Foundation of Korea grant funded by the Ministry of Education, Science and Technology of the Korea government (2011-0010430). 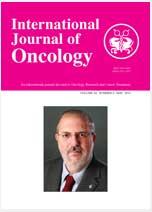