Intervertebral disc degeneration (IDD) is a major cause of lower back pain. The high morbidity associated with this disease diminishes the quality of life of those who are affected. MicroRNAs (miRs) play crucial roles in various diseases, including IDD. However, the mechanism via which miR‑200c‑3p plays a role in the development of IDD remains unknown. The present study aimed to investigate the effect of miR‑200c‑3p on the progression of IDD and the underlying mechanism. The expression level of miR‑200c‑3p was evaluated in intervertebral disc tissues from patients with IDD. To construct the IDD cell model, the nucleus pulposus (NP) cells were treated with lipopolysaccharide (LPS) 24 h following transfection with miR‑200c‑3p mimic or inhibitor. A luciferase activity assay was performed, while reverse transcription‑quantitative PCR and western blotting were conducted to determine the RNA and protein expression levels, respectively. The expression level of miR‑200c‑3p in the intervertebral disc tissues of patients with IDD was lower than that of normal subjects. LPS treatment reduced the expression level of miR‑200c‑3p in NP cells. Moreover, miR‑200c‑3p mimic inhibited LPS‑induced NP cell apoptosis. It was found that miR‑200c‑3p attenuated inflammatory cytokine levels and extracellular matrix (ECM) degradation in NP cells. Furthermore, miR‑200c‑3p targeted Ras‑related protein 2C (RAP2C) in NP cells. RAP2C promoted apoptosis, inflammatory cytokine levels and ECM degradation by activating ERK signaling. Knockdown of RAP2C and inhibition of ERK signaling by SCH772984 partially reversed the proinflammatory effect of the miR‑200c‑3p inhibitor on LPS‑treated NP cells. Thus, miR‑200c‑3p inhibits NP cell apoptosis, inflammatory cytokine levels and ECM degradation in IDD by targeting RAP2C/ERK signaling.

Intervertebral disc degeneration (IDD) is a prevalent complicated disease of the spine that reduces the quality of life of patients (1). IDD is usually associated with myelopathy, radiculopathy and lower back pain, with an incidence rate of >90% (2). IDD is affected by several factors, such as apoptosis, inflammatory factors, degradative enzymes, mechanical load, cellular senescence and heredity (3). However, the exact mechanisms responsible for IDD remain elusive.

MicroRNAs (miRNAs/miRs) are small non-coding RNAs that modulate their target genes by regulating mRNA stability and translation, as well as controlling gene expression at the post-transcriptional level by pairing with target mRNAs at the 3′ untranslated region (3′UTR) (4). Increasing evidence has revealed that miRNAs are involved in the progression of IDD. For instance, miR-140-5p overexpression reduces lipopolysaccharide (LPS)-induced inflammation and degeneration of intervertebral discs by downregulating Toll-like receptor 4 (TLR4) (5). Moreover, miR-132 contributes to extracellular matrix (ECM) degradation by directly targeting growth and differentiation factor 5 (GDF5) in NP cells (6). miR-200c-3p is involved in the pathogenesis of inflammatory diseases (7), and it has been shown that the expression levels of miR-200c-3p in the synovial fluid of 150 patients with knee osteoarthritis were significantly lower compared with those in 54 healthy controls (8). miR-200c-3p has also been reported to inhibit apoptosis and inflammation in cigarette smoke extract-stimulated 16HBE cells (9). However, the mechanism of action of miR-200c-3p on IDD progression remains unknown.

Ras-related proteins (RAPs) organize various biological processes, including metabolic turnover, cytoskeletal organization, cell cycle, differentiation and cell adhesion (10). RAP contains a broad family of nucleotide-binding proteins, including five members: RAP1A, RAP1B, RAP2A, RAP2B and RAP2C (11). Previous studies have revealed that RAP2C was involved in multiple diseases, such as laryngeal squamous cell carcinoma (12). However, to the best of our knowledge, the role of RAP2C in the regulation of IDD progression has not been previously reported. It has been shown that RAP2C activates ERK signaling (13), which has been identified as crucial in the modulation of IDD progression (14,15). Pro-inflammatory macrophages promote the degeneration phenotypes of nucleus pulposus (NP) cells partly via JNK and ERK signaling (16). However, the association of ERK signaling with miR-200c-3p and RAP2C in IDD modulation is yet to be fully elucidated.

Thus, the present study aimed to investigate the role and underlying mechanism of miR-200c-3p in the modulation of IDD development.

A total of 22 intervertebral disc tissues from patients with IDD (age, 41–64 years; 10 male and 12 female) and 9 normal samples (age, 40–49 years; 4 male and 5 female) used in this study were obtained from Qingdao No. 6 People's Hospital between May 2018 and December 2019. All patients with chronic lower back pain (lasting for >3 months) underwent MRI examinations (17,18). The 22 patients with IDD underwent fusion surgery and intervertebral disc excision. The 9 normal tissues were obtained from patients who underwent traumatic lumbar fracture. Patients who were treated with chemotherapy or radiotherapy were excluded from this study. The samples were immediately frozen in liquid nitrogen and stored at −80°C before further analysis. The samples used in this study were obtained with written approval from patients. This study conformed to the experimental guidelines of the World Medical Association and the Ethics Committee of Qingdao No.6 People's Hospital (approval no. 201907).

Lentiviral plasmids (GV248) carrying RAP2C short hairpin RNA (shRNA) and the corresponding negative control (NC) shRNA were synthesized and obtained from Shanghai GenePharma Co., Ltd. The sequence of RAP2C shRNA was 5′-GAAGCAAGAUCAGUGUUGU-3′ and the sequence of the NC shRNA was 5′-TTCTCCGAACGTGTCACGT-3′. The ratio of the lentiviral plasmid, packaging vector (Shanghai GenePharma Co., Ltd.) and envelope vector (Shanghai GenePharma Co., Ltd.) was 4:3:3. A second-generation system was used. Briefly, 293T cells (American Type Culture Collection) were plated into 6-well plates (1×106/well), which were used as the interim cell line, and they were transfected with 20 µg lentiviral plasmid using Lipofectamine® 3000 (Invitrogen; Thermo Fisher Scientific, Inc.) at 37°C for 12 h. Lentiviral particles were collected using 72,000 × g/min centrifugation for 120 min. NP cells were plated into 24-well plates (2×105/well) and subsequently infected with the lentiviral supernatant (1×108 TU/ml) at a multiplicity of infection of 10 at 37°C for 12 h using TR-1003-G (Sigma-Aldrich; Merck KGaA). After 48 h of cell transduction, these cells were selected for in the presence of puromycin (1 µg/ml; Beyotime Institute of Biotechnology) for 3 days between transfection and experimentation at 37°C to generate stable NC and RAP2C-knockdown cells. Puromycin (0.5 µg/ml) was used for maintenance.

The levels of TNF-α (cat. no. KHC3013), IL-6 (cat. no. KAC1261) and IL-1β (cat. no. KAC1211) were analyzed using ELISA kits (eBioscience; Thermo Fisher Scientific, Inc.) according to the manufacturer's instructions. All standards and samples were tested on a SpectraMax M5 microplate reader device (Molecular Devices, LLC) at an absorbance of 450 nm. A standard curve was prepared, and the concentration of the samples was calculated according to the absorbance value. Data are presented as the mean ± SD of three experiments.

TargetScan (http://www.targetscan.org/vert_72) was used to verify the potential interaction between RAP2C and miR-200c-3p. Luciferase reporter gene assays were performed using a dual-luciferase reporter assay system (Promega Corporation). The RAP2C wild type or mutant 3′-untranslated region sequences containing the miR-200c-3p binding site were constructed and subcloned into the psiCHECK2 vector (Promega Corporation). Briefly, the miR-200c-3p or control mimic, and the vector containing RAP2C and RAP2C mutant fragments were transfected into the cells (3×105/well) using Lipofectamine 3000 for 48 h, followed by the analysis of luciferase activities, in which Renilla was used as a normalized control reporter. Data are presented as the mean ± SD of three experiments.

It has been reported that the activation of ERK signaling contributes to the development of IDD (14,22). The phosphorylation of ERK is required for activation of ERK signaling (23,24). The expression level of RAP2C was significantly upregulated by the overexpression of RAP2C, whereas the ERK inhibitor SCH772984 partially reduced this upregulation in NP cells. Moreover, the knockdown of RAP2C significantly decreased RAP2C expression (Fig. 5A). The knockdown of RAP2C increased the ratio of p-/total ERK protein expression (Fig. 5A). Moreover, RAP2C induced LPS-treated NP cell apoptosis, and SCH772984 partially restored this phenotype (Fig. 5B). In addition, SCH772984 partially blocked the elevated levels of TNF-α, IL-6 and IL-1β caused by the overexpression of RAP2C in LPS-treated NP cells (Fig. 5C-E). In addition, RAP2C overexpression-inhibited expression of collagen II and aggrecan was rescued by SCH772984 treatment in LPS-treated NP cells (Fig. 5F and G). Taken together, these data suggest that RAP2C enhances apoptosis, inflammatory cytokine levels and ECM degradation by activating ERK signaling.

IDD is a complex disorder characterized by genotypic and phenotypic alterations, such as ECM degradation, apoptosis and inflammation (25). miRNAs are essential regulators of multiple physiological and pathological processes, and are involved in the modulation of IDD progression. It has been reported that TLR4/NF-κB signaling increases the expression of miR-625-5p, thereby contributing to the pathological process of IDD by modulating collagen type I α 1 (26). miR-665 contributes to the proliferation and matrix degradation of NP cells by regulating the expression of GDF5 in IDD (27). Moreover, miR-24-3p upregulation is able to increase IDD by targeting insulin-like growth factor-binding protein 5 and ERK signaling (28), while miR-640 induces IDD by modulating Wnt and NF-κB signaling (29). Contrary to the aforementioned results, miR-200c-3p expression was significantly decreased in the intervertebral disc tissues of patients with IDD and it inhibited apoptosis, inflammatory cytokine levels and ECM degradation in IDD by targeting RAP2C/ERK signaling.

ECM degradation plays a critical role in the development of IDD, in which collagen II and aggrecan serve as markers of ECM degradation (36). In the present study, the expression levels of collagen II and aggrecan were decreased by miR-200c-3p inhibitors but upregulated by miR-200c-3p mimics in LPS-treated NP cells. This finding was in agreement with a previous study showing that long non-coding RNA nuclear paraspeckle assembly transcript 1 downregulated aggrecan, collagen II, thrombospondin-type motifs 5 and MMP13 by modifying ERK/MAPK signaling in NP cells (37). Consistently, TGF-β1 inhibits the expression of C-C motif chemokine ligand 3/4 via ERK signaling and restricts IDD and inflammation-induced pain (38). Moreover, autophagy alleviates compression-related NP cell apoptosis in IDD via MEK/ERK/nuclear respiratory factor 1/autophagy related 7 signaling (39). The present study demonstrated that ERK signaling was involved in the miR-200c-3p/RAP2C-mediated apoptosis, inflammatory cytokine levels and ECM degradation in NP cells.

The current study has some limitations. The expression levels of aggrecan and collagen II were determined only via RT-qPCR, while levels of inflammatory factors were assessed using ELISA alone. In future studies, the results of the present study should be verified using in vivo models and the regulation of IDD by miR-200c-3p requires further investigation.

This study was supported in part by the Qingdao Medical Research Guidance Program in 2018: Three-dimensional Decompression Comprehensive Therapy for the Treatment of Lumbar Disc Herniation and Degeneration (grant no. 2018-WJZD113).

JC and KX designed the study. MJ performed the experiments. HR analyzed data. JC and KX confirm the authenticity of all the raw data. KX wrote the paper. All authors read and approved the final manuscript.

The protocol of this research has been approved by the Ethics Committee of Qingdao No.6 People's Hospital. All patients have signed written informed consent.

The authors declare that they have competing interests. 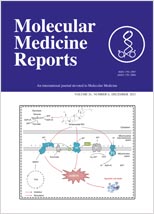