Although early diagnosis and treatment of cancers in women are achievable through continuous diagnostic tests, cervical cancer (CVC) still has a high mortality rate. In the present study, we investigated whether certain nanoparticles (NPs), comprising aspirin conjugated 2'‑hydroxy‑2,3,5'‑trimethoxychalcone chemicals, could induce the apoptosis of cancer cells. HeLa cells were treated with NPs and the cell viability was evaluated using WST‑1 assay. Protein expression of Ki‑67 was measured using immunocytochemistry. In addition, the apoptotic effect of NPs was determined using TUNEL assay. To investigate the apoptosis signaling pathways, reverse transcription quantitative PCR was performed and lipid accumulation was observed via holotomographic microscopy. The IC50 value of the NPs was 4.172 µM in HeLa cells. Furthermore, 10 µM NPs significantly inhibited the cell proliferation and stimulated the apoptosis of HeLa cells. In addition, apoptosis and mitochondrial dysfunction were induced by the NPs through lipid accumulation in HeLa cells, leading to apoptotic signaling cascades. Taken together, the results from the present study demonstrated that the NPs developed promoted apoptosis though efficient lipid accumulation in HeLa cells, suggesting that they may provide a novel way to improve the efficacy of CVC anticancer treatment.

Cervical cancer (CVC) is currently the second leading cause of mortality in women worldwide, and according to the in 2018 World Health Report of the World Health Organization, the average age-adjusted incidence of CVC cancer was 13.1 per 100,000 (1). Morbidity and mortality rates are higher in developing countries compared with developed countries (2). Vaccination against the human papillomavirus (HPV) can reduce the incidence of CVC, although CVC cannot be completely prevented (3). Further research is therefore needed for the development of CVC treatment strategies beyond the methods used for CVC diagnosis such as smear cytology and colposcopy.

CVC is highly associated with oncogenic mutations caused by HPV infection, which are responsible for host cell proliferation (4). Furthermore, most HPV types, including HPV16, HPV18 and HPV84, encode oncoproteins such as E6 and E7 that overcome host tumor-suppressor and cell-cycle checkpoint proteins like p53, cyclin E, p21, and p27 (5–8). Current treatments for CVC include surgery, radiation therapy and chemotherapy (9,10). In the case of chemotherapy, certain drugs such as cisplatin and doxorubicin are preferred for reducing the preoperative tumor size or preventing postoperative recurrence, as well as for treating metastases (11). However, some patients have reported some adverse side effects or presented with resistance to drug therapy (12,13).

Apoptosis is one of the main mechanisms of action of chemotherapeutic cancer drugs and is a type of mitochondria-mediated cell death (14). Apoptotic stress activates pro-apoptotic agents such as BAX, which are regulated by the activated Bcl-2 molecule. Activated BAX stimulates the release of cytochrome c from the mitochondria. In addition, the released cytochrome c induces apoptosis by proteolysis, membrane damage and DNA cleavage through activation of Apaf-1, caspase-9 and caspase-3 (15). In particular, oxidative stress-induced cell-death pathways promote mitochondrial fission, which is associated with lipid accumulation (16,17). In addition, doxorubicin can induce lipid droplet accumulation in the cytoplasm in various types of cancer, including colorectal cancer, lymphoma and breast cancer, which participate in apoptosis (18). One important strategies for treating CVC may therefore involve the induction of apoptosis by regulating mitochondrial function.

Recently, aspirin has been used for its anticancer effects in various types of tumor, including gastric, esophageal and colon cancers (18). For example, in gastric cancer cell line SGC7901, the survival of cells treated with 3.0 and 10.0 mmol/l aspirin for 24 h was decreased by 44.6 and 88.5%, respectively (19). Data from a clinical report indicated that aspirin may help inhibiting breast cancer metastasis (20,21). Subsequently, in a previous study, we designed an aspirin conjugated chalcone derivative that had anti-inflammation and anti-tumor properties and prepared nanoparticle (NP) formulations, since some anticancer drugs, including the chemical used in the present study, have non-polar properties that make them difficult to be used in an injectable form (22). This revealed that aspirin and 2′-hydroxy-2,3,5′-trimethoxychalcone linked polymeric nanoparticles (AS-DK143-NPs) selectively targeted cancer cells and significantly reduce tumor sizes in a breast cancer xenograft model with low toxicity to healthy tissues. In the present study extended our previous observation by performing additional experiments to provide a comprehensive understanding of the role of AS-DK143-NPs against CVC in several representative solid cancer cell lines such as HepG2, BXPC-3, AGS and HeLa.

Cell lines were authenticated using short tandem repeat (STR) analysis as described in 2012 in the ANSI standard (ASN-0002) by the American Type Culture Collection Standards Development Organization and by Reid et al (23) The match criterion is based on an algorithm that compares the number of shared alleles between the reference and sample profile.

AS-DK143 polymeric micelles (AS-DK143-NPs) were prepared using the thin-film hydration method. Briefly, methoxy poly(ethylene glycol)-b-poly(D,L-lactide) (mPEG-PLA, 60 mg) and AS-DK143 (10 mg) were dissolved in dichloromethane (50 ml) and then removed by rotary evaporator under reduced pressure at 40°C. The film obtained from this process contained AS-DK143 distributed in an amorphous form. The film was continuously hydrated in distilled water (50 ml) at room temperature. The solution was filtered through a syringe filter (0.2 µm) and lyophilized for 48 h.

HeLa cells were plated in 8-chamber slides at a density of 0.5 × 104 cells/well, and the cells were treated with AS-DK143-NPs for 24 h. Cells were fixed in 4% paraformaldehyde (PFA) and permeated in 0.1% TritonX-100 solution for 5 min at room temperature. Cells were incubated with equilibration buffer for 5 min and treated with recombinant terminal deoxynucleotidyl transferase (rTdT) reaction solution (consisting of equilibration buffer, a mixture of biotinylated nucleotides, and rTdT enzyme) for 1 h at 37°C. The cells were immersed in 2X SSC buffer (NaCl and sodium citrate) and washed with phosphate-buffered saline. The cells were incubated with streptavidin-conjugated horseradish peroxidase solution for 30 min. The cells were reacted with 3,3′-diaminobenzidine (DAB) solution (DAB chromogen and DAB substrate). Subsequently, the cells were mounted and observed under a light microscope.

HeLa cells (1×105 cells/well) were seeded in 30-mm dishes and treated with AS-DK143-NPs for 24 h. Cells were then fixed with 4% PFA for 10 min at room temperature (RT) and permeabilized using 0.1% Triton-X 100 for 15 min at RT. The cells were blocked for 1 h in 5% BSA at room temperature and incubated with a primary antibody against Ki-67 (1:1,000) for 24 h at 4°C. Subsequently, cells were incubated for 1 h at RT with a fluorophore-conjugated secondary antibody (1:1,000). Cells were further incubated with Hoechst solution for 20 min at room temperature. Fluorescence was observed using a K1-fluo microscope (magnification, ×200; Nanoscope Systems, Inc.).

To detect the effects of AS-DK143-NPs on live cells, HeLa cells (1×105 cells/well) were seeded in 60-mm Tomodishes and treated with 30 µM AS-DK143-NPs at 36°C for 30, 60 and 120 min. 3D holotomography images of live cells were obtained using an HT-1 microscope (magnification, ×600; Tomocube, Inc.). The cell structures were scanned using a digital micromirror device and reconstructed using a 3D refractive index tomogram. The masses of the cytoplasm and lipid droplets were analyzed based on densities of 0.135 g/ml and 0.178 g/ml, respectively.

Fig. 1 shows the chemical structure of AS-DK143 and the formed NPs that were used as an efficient drug delivery system. Cell viability assay was performed to evaluate the anti-tumor effects of AS-DK143-NPs on the four cell lines HepG2, BXPC-3, AGS and HeLa. Cells were treated with increasing concentration of AS-DK143 for 24 h. The inhibitory rate was determined using WST-1 assay. As presented in Fig. 2, the IC50 values of AS-DK143-NPs were 18.54, 35.74, 9.28 and 4.17 µM in HepG2, BXPC-3, AGS and HeLa cells, respectively. The AS-DK143-NPs revealed a reducing effect on cell viability in HeLa cells compared with other cell lines.

To determine whether AS-DK143-NPs could induce lipid accumulation, we performed live cell imaging, 3-D holographic imaging using a holotomographic microscope and determined CD36 mRNA expression by RT-qPCR. Hela cells were treated with AS-DK143-NPs (10 µM) for 2 h and 2D images representing their cell morphology were taken (Fig. 4A). We observed the formation of apoptotic bodies over time. The 3D images revealed lipid droplet formation (red color) and lipid accumulation occurred in a time-dependent manner. The 3D holotomographic-imaging assay was performed to evaluate lipid masses in live cells. The results demonstrated that lipid accumulation was not altered in vehicle treated cells but was significantly increased (~6-fold) in HeLa cells treated with AS-DK143-NPs (Fig. 4B). As presented in Fig. 4C, AS-DK143-NPs significantly increased the mRNA level of CD36 compared with the vehicle.

CVC therapy may include a surgical method, depending on the progression of the lesion (25). Doxorubicin can be used to treat CVC and various types of cancer, such as breast and bladder cancer, Kaposi's sarcoma, lymphoma and acute lymphocytic leukemia. However, anthracycline-based anticancer drugs such as doxorubicin can cause toxicity and permanent damage in cardiac cells (26). Identifying effective anticancer drugs with reduced side effects is therefore crucial in the development of anticancer treatment strategy for CVC, which may improve patient survival and enable surgery. Aspirin was the first synthetic antipyretic and anti-inflammatory analgesic and was used for various purposes, including reducing cardiovascular risk, especially myocardial infarction and ischemic stroke (27,28). DK143 is synthesized from selected plant-derived anticancer drugs (29). In the present study, we attempted to synthesize NPs carrying both compounds, aspirin and DK143, which have excellent anticancer properties and no adverse side effects on the heart (22).

The results from the present study demonstrated that AS-DK143-NPs may have a stronger cytotoxic effect on HeLa cells compare with other human cancer cell lines, including HepG2, BXPC-3 and AGS cell lines. We also determined whether AS-DK143-NPs could induce cell cycle regulation in HeLa cells. Ki-67 is closely related to tumor cell proliferation. Thus, it is not expressed during the stationary phase (G0) of the cell cycle, but is expressed during the proliferative phases (G1, S, G2 and M phases) (30). The present study demonstrated that AS-DK143-NPs reduced Ki-67 expression. However, these results raised the question of whether AS-DK143-NPs may exert an anticancer effect by inducing apoptosis.

Apoptosis is induced by cellular signals that originate from mitochondria (31). BAX and Bcl-2 play important regulatory roles in apoptosis induction (32). An increased BAX/Bcl-2 expression ratio has been reported to promote apoptotic signals triggered by anticancer drugs (33). In the present study, we observed that apoptosis induced by AS-DK143-NPs could inhibit HeLa cell viability. Furthermore, apoptosis induction by AS-DK143-NPs was confirmed by performing TUNEL assays and staining cell nuclei with the Hoechst dye. The results from these analyses suggested that AS-DK143-NPs may exert anticancer effects by regulating apoptosis.

In future studies, in order to investigate how lipid accumulation by AS-DK143-NPs induces apoptosis in HeLa cell, we need to confirm that lipid droplet accumulation via high glucose or TGFb2 exposure in cancer cells induces apoptosis directly. Our results indicated that AS-DK143-NPs may represent a potential treatment strategy against CVC. Further investigation on the anticancer effects of AS-DK143-NPs in tumor-bearing animal models, the possible adverse effects on normal cells and comparative studies including negative and positive controls is needed to determine whether AS-DK143-NPs may be considered as a potential anticancer drug that could induce cancer cell apoptosis. Future studies will perform flow cytometry (FACS) analyses for cell cycle analysis and additional western blot analysis, including apoptosis-related proteins (BAX, BCL2 and Caspase 3/7), for more detailed apoptosis evaluation. In addition, we are going to conduct cytochrome c oxidase assay for additional mitochondrial fate evaluation.

KPL, SB, KSP and BSM conceived and designed the study. MSY, KPL, SB and JSP performed the experiments. BSH, SJL, SJO, DHL, RL and SHK analyzed the data. KPL and SB drafted the initial manuscript. KSP and BSM revised the manuscript and confirmed the authenticity of all the raw data. All authors have read and approved the final manuscript. 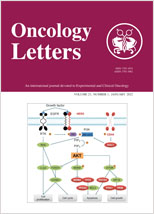