Taiwanofungus camphoratus (Antrodia cinnamomea), often referred to as ‘Niu-chang-chih’, is a medicinal fungus that only grows on the native tree Cinnamomum kanehirai Hayata in Taiwan (7). Several bioactive compounds are present in Taiwanofungus camphoratus, including polysaccharides, triterpenes, diterpenes, succinic acid derivatives, and ubiquinone (7). 4-Acetylantroquinonol B (4-AAQB) is the ubiquinone derivative of Taiwanofungus camphoratus, which is identified as the major antiproliferative compound for hepatoma cells (8). In addition, 4-AAQB is known to participate in modulating many physiological and pathological processes, such as anti-inflammatory and antioxidant ability (9), amelioration of nonalcoholic steatohepatitis (9) and inhibition of osteoclast formation (10), breast cancer (11), glioblastoma (12), and hepatic cancer stem cell tumorigenicity (13).

MiaPaCa-2 and MiaPaCa-2GEMR cells (8×103 cells/well) were cultured in a 96-well plate overnight. The cells were incubated with various concentrations (0.1–5 µM) of 4-AAQB at 37°C for 48 h. The medium was discarded, and the cells were washed in PBS three times. Cells were incubated with MTT solution (0.5 mg/ml) for 1 h at 37°C. The MTT solution was removed and the formazan crystals were dissolved in 200 µl DMSO. Cell viability was determined using a microplate reader (FLUOstar Omega) at 570 nm and calculated as: Cell viability (%) = Absorbance of the sample/Absorbance of the control) ×100.

MiaPaCa-2 and MiaPaCa-2GEMR cells (6×104 cells/well) were cultured in a 24-well plate overnight. Cells were treated with 4-AAQB (2 and 5 µM) with or without GEM at 37°C for 48 h. The cells were then incubated with DCFH-DA at 37°C for 30 min. The cellular ROS level was measured using a Fluostar Galaxy reader (BMG Labtechnologies Ltd.) with maximum excitation and emission spectra of 485 and 520 nm, respectively. The level of ROS was calculated as the rate of change in contrast to the level in untreated cells.

MiaPaCa-2 and MiaPaCa-2GEMR cells (6×104 cells/ml) were cultured in a 6-well plate overnight. Cells were incubated with various concentrations (2 and 5 µM) of 4-AAQB at 37°C for 48 h. The medium was discarded and cells were washed with PBS three times. Cells were harvested by trypsinization and fixed with 70% ethanol at −20°C for 2 h. Cells (1×105) were stained with 0.5 ml PI/RNase staining buffer (cat. no. 550825, BD Biosciences) at room temperature for 30 min. The cell cycle was evaluated using a BD Accuri C6 Plus flow cytometer (BD Biosciences). The cell cycle phase distribution was analyzed by ModFit LT 3.1 software (Verity Software House).

MiaPaCa-2 and MiaPaCa-2GEMR cells (1×106) were incubated with 4-AAQB (2 and 5 µM) at 37°C for 48 h. The expression of proteins related to apoptosis (Bcl-xL and Bax), autophagy (Atg5, Beclin-1, and LC3 II), and GEM resistance-associated signaling (PI3K, phospho-PI3K, Akt, phospho-Akt, Vps34, RAGE, HMGB1, and MDR1) was determined using western blotting as described in a previous report (21). Briefly, cells were lysed by ice-cold RIPA lysis buffer (Thermo Fisher Scientific, Inc.) containing a cocktail of 1% protease inhibitors (P&C Biotech, Inc.) and 1% phosphatase inhibitors (P&C Biotech, Inc.), and the protein concentration was determined using a BCA protein assay kit (Energenesis Biomedical Co., Ltd.) according to the user guide. A total of 50 µg protein per lane was separated using 10–12% SDS-PAGE, then transferred to PVDF membranes and blocked with 5% non-fat milk in TBS-0.1% Tween-20 (TBST) at room temperature for 1 h. PVDF membranes were incubated primary antibodies (1:1,000) overnight at 4°C. After washing three times with TBST at room temperature for 10 min, the membranes were incubated HRP-conjugated secondary antibodies (1:10,000) at room temperature for 2 h. After antibody incubation, the protein was visualized using the ECL detecting reagent (PerkinElmer, Inc.), and the density of the target protein bands was quantified with the corresponding internal reference proteins by the Biospectrum 810 UVP VisionWorks LS Image Acquisition and Analysis Software (UVP).

MiaPaCa-2 and MiaPaCa-2GEMR cells (4×104 cells/ml) were cultured in a 96-well plate overnight. The increase in chemosensitivity was evaluated through both cotreatment with 4-AAQB and GEM and 4-AAQB pretreatment methods. For cotreatment, cells were incubated with 4-AAQB (2 and 5 µM) plus GEM at 37°C for 48 h. For pretreatment, cells were pretreated with 4-AAQB (2 and 5 µM) at 37°C for 48 h and then incubated with GEM at 37°C for another 48 h. In the pretreatment method, cells unexposed to 4-AAQB or GEM were incubated in complete medium until the end of the experiment. After treatments, chemosensitivity was determined using the MTT analysis.

Cell migration was evaluated using a gap closure assay. The Ibidi® culture inserts were placed in a 24-well plate, and then MiaPaCa-2 and MiaPaCa-2GEMR cells (5×105 cells/ml) were seeded into the inserts and cultured with complete medium overnight. After cell attachment, the culture insert was removed and then the migration distance was recorded after exposure to 4-AAQB (2 and 5 µM) with or without GEM (0.5 µM) at 37°C for 48 h in serum free condition. The cell migration rate was calculated using ImageJ software (version 1.34s; National Institutes of Health). The migration area of the various treatment groups was calculated as a percentage of the untreated group using the following formula: Mean migration area of the experimental group/mean migration area of the control group ×100%.

Cell invasion was measured using a Transwell® system with an 8-µm pore size (Corning, Inc.) as described previously (22). Briefly, 0.5 mg/ml Matrigel (Thermo Fisher Scientific, Inc.) was coated on the upper chambers of the inserts at 37°C for 1 h. MiaPaCa-2 and MiaPaCa-2GEMR cells (5×104 cells/well) were cultured with 4-AAQB (2 and 5 µM) under serum-free conditions at 37°C for 48 h on the upper chambers and medium containing 10% FBS served as a chemoattractant in the lower chambers. The invading cells were subsequently fixed in 100% methanol for 10 min at room temperature, stained with 0.5% crystal violet for 10 min at room temperature. The total invasive number of cells was calculated using the Power IX71 Inverted Fluorescence Microscope (Olympus Corporation).

All experiments were repeated independently three times. The data were analyzed using one-way ANOVA followed by Tukey's post hoc test using the SPSS 20 software (IBM, Corp.) and are shown as the mean ± SD. P<0.05 was considered to indicate a statistically significant difference.

The pro-apoptotic protein Bax directly inhibits autophagy (25). Furthermore, clinical evidence has revealed that autophagy is involved in resistance to gemcitabine/nab-paclitaxel chemotherapy and its cytotoxic response in patients with pancreatic cancer (26). Thus, the expression levels of autophagy-associated proteins (Atg5, Beclin-1 and LC3 II) were assessed using western blotting. The protein expression levels of Atg5 and LC3 II were significantly reduced after 4-AAQB treatment in both cell lines compared with the untreated cells (Fig. 4).

The PI3K/Akt signaling pathway is critical for tumor survival and autophagy initiation (27,28). The phosphorylation of PI3K and Akt significantly decreased in 4-AAQB-treated MiaPaCa-2 and MiaPaCa-2GEMR cells compared with untreated cells (Fig. 5A-C). Vps34 binds to beclin-1 and subsequently activates autophagy (29). Additionally, a previous study indicated that VPS34 was essential for the autophagy process (30). In the present study, the expression of the Vps34 protein was significantly reduced following the 4-AAQB incubation in both cell lines (Fig. 5D and E).

As shown in our previous study, the PI3K/Akt/MDR1 axis is triggered by HMGB1 and RAGE engagement during GEM chemoresistance (19). Thus, the protein expression levels of HMGB1, RAGE, and MDR1 were examined. The levels of HMGB1 and RAGE were significantly inhibited after 5 µM 4-AAQB treatment in MiaPaCa-2 cells (Fig. 6A-C). Moreover, treatment with both 2 and 5 µM 4-AAQB effectively inhibited HMGB1 and RAGE expression in MiaPaCa-2GEMR cells (Fig. 6A-C). Accordingly, the level of the MDR1 protein was reduced by 4-AAQB treatment in a dose-dependent manner in both cell lines (Fig. 6D and E).

A previous study showed that suppression of the PI3K/AKT pathway by inducing ROS generation may represent a strategy for cancer treatment (31). Additionally, GEM induces ROS, resulting in an increase in pancreatic cancer cell death, although the opposite effect is observed in GEM-resistant cells (32). In the present study, ROS levels were measured using DCFH-DA staining. The results showed that ROS levels significantly increased in a dose-dependent manner following 4-AAQB treatment in both cell lines (Fig. 7A and B). Notably, ROS accumulation was dramatically increased by 4-AAQB combination with GEM treatment in MiaPaCa-2GEMR cells compared with 4-AAQB-treated alone or GEM-treated alone condition (Fig. 7B).

4-AAQB is a novel bioactive compound, and its effect on GEM chemosensitivity remains unclear. A previous study has reported that 4-AAQB plays a critical role in inhibiting tumor growth by attenuating cisplatin chemoresistance and inhibiting Atg5-dependent autophagy in ovarian cancer (42). Increased autophagy in pancreatic cancer is strongly associated with early metastasis and chemotherapy resistance, indicating that autophagy may serve as a therapeutic target for pancreatic cancer (43). Additionally, a clinical trial found that the administration of an autophagy inhibitor (hydroxychloroquine) in combination with GEM therapy effectively increases the survival rate through the activation of immune responses in patients with resectable pancreatic cancer (26). The findings of the present study revealed that autophagy-associated protein (LC3 II and Atg5) levels and GEM resistance were significantly reduced in 4-AAQB-treated cells.

Based on accumulating evidence, apoptosis and autophagy may compete with each other; for example, tioconazole represses autophagy-related 4A cysteine peptidase (ATG4A) and ATG4B expression, which subsequently enhances chemotherapy-induced apoptosis in glioma, colorectal, and breast cancer cells (44). Additionally, spautin-1 (an autophagy inhibitor) has been shown to increase apoptosis by inactivating the PI3K/Akt pathway in chronic myeloid leukemia cells (45). Moreover, a previous report found that cell cycle arrest and apoptosis were induced in 4-AAQB-treated MDA-MB-231 and Hs578T human breast cancer cells (11). The findings from the present study corroborate the aforementioned results and indicate that 4-AAQB induces cell cycle arrest, apoptosis, and GEM chemosensitivity by inhibiting autophagy and the PI3K/Akt signaling axis.

Our previous studies demonstrated that the RAGE/HMGB1-initiated PI3K/Akt/MDR1 biochemical cascade was strongly related to GEM chemoresistance in human pancreatic cancer cells and xenograft mouse models (18–21). Moreover, 4-AAQB has been shown to suppress autophagy and enhance cisplatin sensitivity by suppressing PI3K/Akt/mTOR/p70S6K signaling in ovarian cancer cells (46). In addition, PI3K/Akt signaling is the dominant regulator of the epithelial-mesenchymal transition (EMT), which contributes to tumor migration, invasion, and metastasis (47). 4-AAQB (5–10 µM) treatment significantly downregulated VEGF and reduced cell migration and invasion in a dose-dependent manner in DLD-1, HT-29, and HCT-116 colorectal cancer cells (48,49). In addition, previous evidence showed that cell migration studies had shown the importance of cell moving ability; however, a 2D substrate (Matrigel matrix) was used in the evaluation of cell invasion that may deliver inconsistent results due to cell adhesion with a different substrate such as polystyrene cell culture plate or Matrigel matrix-coated (50). A previous study compared the motility-associated protein profiles between human bladder cancer T24T cells (higher invasion but lower migration abilities) and its parental non-metastatic T24 cells (51). The results has demonstrated that high cell migratory activity does not necessarily mean high invasive activity in highly metastatic human bladder cancer T24T cells via SOD2 and MMP-2 regulated metastatic behaviors (51). Although the inhibitory effect of 4-AAQB/GEM co-treatment on invasion was greater than that on migration of MiaPaCa-2 cells, cell migration and invasion were reduced by 4-AAQB treatment in both MiaPaCa-2 and GEM-resistant cells, suggesting that 4-AAQB may play a critical role in the inhibition of tumor metastasis.

In conclusion, the present study described the mechanism through which 4-AAQB downregulates autophagy and enhances cytotoxicity, ROS accumulation, cell cycle arrest, apoptosis, and GEM sensitivity through the suppression of the RAGE/HMGB1-initiated PI3K/Akt/MDR1 signaling pathway in pancreatic cancer cells. Accordingly, this 4-AAQB/GEM combination strategy might represent a novel approach for the treatment of GEM-resistant pancreatic cancer.

This research work was supported by a grant from Grape King Bio Ltd., Taiwan (grant no. BR-MM003).

The authors TJL, TWL, CCC are employed by Grape King Bio Ltd. All the authors declare that they have no competing interests. 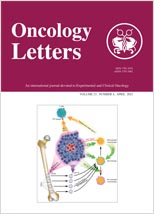