The aim of the present study was to investigate the impact of L‑type amino acid transporter 3 (LAT3) expression on the prognosis of hepatocellular carcinoma (HCC). A total of 135 patients who had undergone initial hepatic resection for HCC at Tokushima University Hospital (Tokushima, Japan) were enrolled in the present study. Immunohistochemical analysis of LAT3 and phosphorylated AKT (p‑AKT) was performed using resected specimens. Clinicopathological factors, including prognosis, were compared between the LAT3‑high and ‑low expression groups. The results demonstrated that the LAT3‑high group showed significantly higher protein induced by vitamin K absence‑II levels (P=0.01) compared with the LAT3‑low group. The LAT3‑high group showed significantly worse prognosis compared with the LAT3‑low group regarding cancer‑specific survival and disease‑free survival (P<0.05). Multivariate analysis revealed that high LAT3 expression and multiple tumors were independent prognostic factors for cancer‑specific survival. Furthermore, the rate of p‑AKT‑positive cases was higher in the LAT3‑high group than in the LAT3‑low group. Overall, these findings suggested that LAT3 expression was associated with poor prognosis of HCC and high p‑AKT expression.

Hepatocellular carcinoma (HCC) is the third leading cause of cancer-related deaths worldwide, accounting for approximately 80–90% of primary liver cancer (1). Despite the progression in treatment strategies, the prognosis of HCC remains poor (2). Therefore, elucidation of the molecular mechanism of HCC progression may contribute to better prognosis.

Multiple kinase signaling pathways including the PI3K/AKT pathway play central roles in the development of various cancers (9). Furthermore, it was reported that activation of PI3K/AKT signaling can affect the proliferation, invasion, and apoptosis of HCC cells (10). AKT is a serine/threonine protein kinase that plays a pivotal role in regulating diverse biological functions, including protein synthesis, cell metabolism, cell survival, and cell cycle progression, following its phosphorylation (11). Phosphorylated-AKT (p-AKT) was reported to stabilize LAT3 protein levels and subsequent cell proliferation in prostate cancer cell lines (12). Therefore, we hypothesized that high expression of LAT3 is associated with poor prognosis in HCC and that p-AKT activation is the mechanism of its malignant potential.

In the current study, we investigated the relationship between LAT3 expression and the clinicopathological factors of HCC including prognosis by immunohistochemical analysis, and investigated its mechanism with respect to p-AKT expression.

One hundred thirty-five patients with histologically proved HCC who underwent hepatectomy at Tokushima University Hospital between January 2008 and December 2017 were enrolled in this study. In this patient cohort, median and range of age was 68 (33–88) years old. We included patients who: (a) had no history of treatment prior to surgery; and (b) had no extrahepatic metastasis. Pathological and morphological parameters and Japanese Tumor-Node-Metastasis stage were determined in accordance with the Liver Cancer Study Group of Japan (13). This study was approved by the institutional review board of our institute (no. 4144).

Immunohistochemical analysis was performed in accordance with the protocol used in our department, which has been previously reported by Ishikawa et al (14). Briefly, sections were deparaffinized with xylene, followed by rehydration in a graded ethanol series. The sections were treated with 3% hydrogen peroxide in methanol for 10 min to quench the endogenous peroxidase activity. Antigen retrieval was performed by boiling in 10 mM citrate buffer (pH 6) using a microwave. After incubation with 1% bovine serum albumin to block nonspecific antibody binding, the sections were incubated with primary antibodies against rabbit monoclonal LAT3 antibody (1:100 dilution, NBP1-87332; Novus, CO, USA) and rabbit polyclonal phospho-AKT antibody (1:100 dilution, ab81283; Abcam, Tokyo, Japan) for 60 min at room temperature. After washing with phosphate-buffered saline, the sections were subjected to the Dako REAL EnVision/HRP detection system (Dako Corporation, Tokyo, Japan) for 60 min at room temperature. The peroxidase reaction was developed with 3,3′-diaminobenzidine as the chromogen. The sections were counterstained with 10% Mayer's hematoxylin, dehydrated in a graded series of ethanol, treated with xylene, and mounted in a synthetic resin. LAT3 expression scores were assessed based on the extent of obvious staining in the cell membrane or cytoplasm, as follows: 0, <5% of the tumor area stained; 1, 5–10% stained; 2, 11–25% stained; 3, 26–50% stained; and 4, ≥51% stained. Tumors in which the stained tumor cells were scored >1 were considered to show positive expression (15). Regarding p-AKT staining, when >10% of the tumor cells were stained in the cytoplasm and/or nucleus, the samples were considered positive (16). Microscopic observation was performed using an Olympus BX43 (Tokyo, Japan) with UPlanFL N objective lenses (4×/0.13, 10×/0.30, 20×/0.5 and 40×/0.75; Olympus) at room temperature, and then images were acquired using camera (DP27, Olympus) and cellSens Standard software (version 1.17.16030.0, Olympus). Representative images of positive and negative expression of LAT3 and p-AKT are shown in Fig. 1. Fig. 1A showed LAT3 expression in tumor tissue and adjacent normal tissue from the same patient, and LAT3 was highly expressed in tumor tissue compared with adjacent normal tissue.

On the basis of the immunohistochemical analysis, 135 patients were divided into LAT3-high (n=46) and LAT3-low (n=89) groups. Table I summarizes the clinicopathological factors of the patients in both groups. The LAT3-high group showed significantly higher levels of protein induced by vitamin K absence-II (PIVKA-II) (P<0.05). There were no significant differences in terms of age, sex, viral infection status, and other tumor factors between the two groups.

The present study evaluated the clinical significance of LAT3 expression in HCC. The LAT family of proteins consists of four Na+-independent neutral amino acid transporters. The members of this family are divided into two sub-families: namely, SLC7 (LAT1 and LAT2) and SLC43 (LAT3 and LAT4) (3). In cancer progression, amino acid uptake is essential for cell proliferation. LAT1 is the most commonly known transporter regarding cancer and transports large neutral amino acids, such as leucine, isoleucine, valine, phenylalanine, tyrosine, tryptophan, methionine, and histidine. However, LAT3 transports a narrow range of neutral amino acids, including leucine, isoleucine, valine, phenylalanine, and methionine (3). In particular, leucine plays pivotal roles in cancer progression, not only in protein synthesis but as a signaling factor (4). Compared with LAT1, LAT3 shows a more restricted expression pattern in some types of cancer, although reports are increasing about prostate cancer and leukemia. Rii et al (17) reported that high LAT3 expression was related to poor prognosis after prostatectomy, and knockdown of SLC43A1, which encodes LAT3, suppressed the proliferation of prostate cancer cells and arrested the cell cycle. Xu et al (18) showed that cellular proliferation and the mTOR pathway, which activates AKT, were significantly reduced when LAT3 was blocked. There is also a report of LAT3 expression in HepG2 HCC cells (19); however, there is no report regarding LAT3 expression in clinical HCC samples. To our knowledge, this is the first report about LAT3 correlated with prognosis in HCC.

LAT3 is an amino acid transporter that uptakes neutral amino acids, most of which are essential amino acids. Among these amino acids, leucine has been reported to promote myofibroblast differentiation via the AKT signaling pathway (20). Because the AKT signaling pathway is correlated with cell survival, cell cycle progression, and apoptosis inhibition (11), AKT signaling was investigated in this study. Zhang et al (12) reported that LAT3 protein levels were increased when AKT was phosphorylated, and that AKT and LAT3 were co-localized on the plasma membrane in prostate cancer cell lines. They confirmed that activated PI3K/AKT signaling regulates leucine transport through LAT3 in prostate cancer. In this study, the LAT3-high expression group showed a significantly higher rate of p-AKT positivity. Therefore, LAT3 expression might accelerate the malignant potential of HCC via AKT signaling. In this study, the LAT3-high group showed significantly higher PIVKA-II levels. PIVKA-II is commonly known as a prognostic factor in HCC (21). In fact, the LAT3-high group showed a worse cancer-specific survival rate compared with the LAT-3-low group. Although there was no significant difference in the disease-free survival rate between the two groups, more aggressive recurrence tended to occur in the LAT3-high group. This may have promoted the worse cancer-specific survival in the LAT3-high group. Thus, high LAT3 expression seemed to be related to the malignant potential of HCC.

In terms of LAT inhibitors, JPH203 has already been reported to inhibit LAT1, and clinical trials are ongoing in various cancers, including biliary and breast cancer (22). Regarding LAT3, ESK246 from Pittosporum has been reported to inhibit LAT-mediated leucine transport in prostate cancer cells compared with leucine analog (23). This inhibitor has potential as a new anti-HCC agent.

This study has several limitations. First, we only investigated LAT3 and p-AKT expression in resected specimens by immunohistochemistry. In this study sample, number of specimens which was available for RT-PCR was small. We plan to perform an in vivo study using an HCC cell line with an inhibitor such as ESK246. Second, this was a single-center study and the number of cases was relatively small. Thus, prospective studies in larger patient populations are necessary in the future.

In conclusion, LAT3 expression was associated with the poor prognosis of HCC and higher expression of p-AKT.

The present study was approved by the ethics committee of Tokushima University Hospital (Tokushima, Japan; no. 4144). The requirement for informed consent was waived, and an information disclosure statement was uploaded onto the homepage of our hospital website for opt-out.

An information disclosure statement that the text, data and images are published, and they will be freely available on the internet and may be seen by the general public was uploaded onto the homepage of the hospital website for opt-out.

MS declares receiving an unrestricted research grant from Bayer Yakuhin, Co. Ltd., Japan. All other authors declare that they have no competing interests. 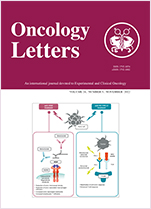