Prostate cancer (PCa) is the most frequently diagnosed cancer in men and the second leading cause of cancer death among men in the United States (1). The most common site of PCa metastasis is the bone, with bone metastases identified at autopsy in up to 90% of patients dying from PCa (2–4). However, the cellular and molecular mechanism underlying bone metastasis is relatively poorly understood, and more effective therapeutic strategies are clearly required in order to oppose PCa bone metastasis.

MicroRNAs (miRNAs) are a diverse family of small RNA molecules that function as a crucial post-transcriptional regulatory mechanism in various cellular functions (5,6) and play a crucial role in tumor metastasis by regulating migration, invasion and epithelial to mesenchymal transition (EMT) (7–10). In PCa, a series of miRNAs were identified to regulate metastasis including miR-21 (11), miR-221 (12), miRNA-200 (13), miR-34a (14) and let-7 (15). We have previously identified that miR-143 and -145 repressed the ability of migration and invasion of PC-3 cells from PCa bone metastasis, and tumor development and bone invasion in vivo, and were negatively correlated to bone metastasis (16). Although we have further found that miR-143 and miR-145 may repress bone metastasis of PCa by regulating EMT (16), which is considered to be a crucial event in the metastatic process (17), the exact mechanisms of miR-143 and miR-145 regulating bone metastasis of PCa is not fully understood.

In recent years, accumulating evidence has provided support that a number of major cancers may be initiated by a small subset of cancer cells with stem cell properties, referred as cancer stem cells (CSCs), which display unlimited proliferation potential, ability to self-renew, and capacity to generate a progeny of differentiated cells that constitute the major tumor population (18–20). Emerging evidence demonstrates that CSCs might be the critical drivers of tumor progression and metastasis (21,22). Furthermore, miRNAs also played a pivotal role in regulating the characteristics of CSCs by negatively regulating the expression of certain key genes in stem cells such as CD44, Oct4, Sox2, c-Myc, and Klf4 (23). Therefore, miRNAs may play a crucial role in repressing/promoting metastasis of cancer by regulating CSCs. In PCa, the recent studies have showed that let-7 (15), miRNA-200 (13) and miR-34a (14) may be important in the progression and metastasis of cancer by regulating CSCs. Because miR-145 regulated Oct4, Sox2 and Klf4, and repressed pluripotency in human embryonic stem cells (ESCs) (24), at the same time, CSCs may share a degree of similarity with ESCs (25), miR-145 might regulate the stemness factors in PCa cells. Moreover, miR-143 and miR-145 may repress bone metastasis of PCa by regulating EMT (16), which is mechanistically linked with stem cell signatures in PCa (13). Thus, the above findings make us hypothesize that miR-143 and miR-145 might regulate stem cell characteristics of PCa cells.

The bone metastatic PCa cell line PC-3 was purchased from American Type Culture Collection (ATCC) and maintained in F-12 culture medium (Hyclone) supplemented with 10% fetal bovine serum (Hyclone). Stably-transfected cells were maintained in media with the presence of puromycin (Sigma-Aldrich). Cells were grown at a humidified atmosphere of 5% CO2 at 37˚C. The sequence of pri-miR-143 and pri-miR-145 were cloned into pMSCV-puromycin plasmid with restriction enzyme BglII and EcoRI (New England Biolabs). 293FT cells were then transfected with the aforementioned constructed plasmids combined with PIK vector or blank pMSCV-vector as control, using the calcium phosphate method as described previously (26). After incubation at 37˚C for 6 h after transfection, the media were changed and the cells were incubated overnight. To produce new virus, the media were collected thrice a day until 293FT cells reach to total confluence. Viruses were used to infect PC-3 cells. Twenty-four hours after addition of viruses, infected cells were selected by adding puromycin to growth medium. Stable cell lines were verified by qRT-PCR. Both pMSCV and PIK plasmids were generous gifts of Professor L.B. Song, Sun Yat-Sen University Cancer Center, Guangzhou, China.

Cell viability was determined by 2-(2-methoxy-4-nitrophenyl)-3-(4-nitrophenyl)-5-(2,4-disulfophen yl)-2H-tetrazolium, monosodium salt (WST-8) assay kit (CCK-8, Dojindo, Japan). Briefly, PC-3 cells were plated at a density of 5×103 cells/well in 96-well plates and allowed to attach for 36 h, CCK-8 was used according to the manufacturer’s instructions. WST-8 was added into each well for 4 hours before the measurement. The absorbance at 450 nm was measured using a microplate reader.

Colony formation assay was performed as previously described (27). PC-3 cells were plated at 300 cells as single cells onto a 65-mm Petri dish for 14 days, and colonies were stained with crystal violet. Plating efficiency = number of colonies (≥50 cells per colony) per input cells × 100%. To determine different colony morphologies, the different colony morphologies were scored under a light microscope.

Spheroid formation assay was performed in PC-3/miR-143, PC-3/miR-145 and PC-3/vector. Cells were plated at 400 cells/well onto 6-well polyHEMA (Sigma)-coated plates and were grown in F12 medium (Hycolone) for 14 days supplemented with B27 (Invitrogen), 20 ng/ml EGF (Sigma), and 20 ng/ml basic FGF (Invitrogen). After 14 days, the number of prostaspheres (tight, spherical, non-adherent masses >100 μm in diameter) were counted, and image of the prostaspheres were captured under inverse microscope. Sphere formation efficiency = colonies/input cells × 100%.

To determine whether miR-143 and miR-145 can inhibit tumor development, we manipulated miR-143 and miR-145 levels in PCa PC-3 cells and then implanted the cells into the NOD-SCID mice. Intra-tibial injection model was used. Twelve male severe combined immunodeficient (SCID) mice, 3–4 weeks old, were purchased from HFK Bio-Technology, Co., Ltd. (Beijing, China). Intra-tibial injection was performed as previously described (16). Mice were monitored weekly for tumor growth. On week 5, hind limbs were radiographed using a Faxitron X-ray machine (Faxitron X-ray Corp., USA) to detect the bone lesions. Then mice were sacrificed, and tibias were collected, decalcified and fixed in formalin for further histologic analysis. Bone lesions were evaluated and calculated as described as previously described (16,28). The animals were sacrificed 5 weeks after receiving radiograph. All tumors were resected at autopsy and sectioned for histological analysis. The animal study was approved by the Institutional Ethical Board (IRB) in the First Affiliated Hospital of Sun Yat-sen University.

The ability to grow as non-adherent spheroids in the sphere medium has been widely used to assess the self-renewal capability of CSCs and is one of the characteristics of prostate CSCs (20,29). To confirm that miR-143 and miR-145 can inhibit the self-renewal capability of PC-3 cells, prostasphere formation of PC-3 cells was studied. As shown in Fig. 3, after culturing for 14 days under non-adherent conditions, there were prostaspheres in all the three kinds of cells. The spheroid formation efficiency was 2.618±0.27% in PC-3/vector, 1.915±0.32% in PC-3/miR-143 and 2.034±0.33% in PC-3/miR-145, confirming the presence of the self-renewal cells in PC-3/miR-143, PC-3/miR-145 and PC-3/vector. Further, both miR-143 and miR-145 suppressed significantly prostasphere formation (p<0.05, respectively). This result indicated that miR-143 and miR-145 repressed CSCs properties of PC-3 cells.

Emerging evidence suggests that miRNAs may function as the regulators of CSC characteristics in many studies (13–16,23,34). In PCa, let-7 inhibited self-renewal and clonogenic capacity of cancer cells by directly targeting EZH2 (15). The miR-34a was established as an important negative regulator of CD44+ PCa cells (putative CSCs) and is involved in PCa development and metastasis (14). The role of miR-34a in controlling CSC characteristics appears to be important by directly repressing CD44 expression in PCa (14). In this study, we found miR-143 and miR-145 also can repressed the expression of CD44, which is speculated as one of miR-143 and miR-145 putative targets (miRWalk) and is the most common of CSC markers (32). Previously, CD44+ PCa cells were shown to have the stem-like properties of increased tumorigenic, clonogenic, and metastatic potential (30). Although CD44 does not seem to belong to the stemness genes, such as Oct4 and Klf4, that are central for maintaining stem cell characteristics, CD44 can contribute to the activation of stem cell regulatory genes and can be a target of these genes (32). More importantly, a recent study has demonstrated that the transcriptional reprogramming led by nuclear CD44 has an active role in transforming cancer cells to a CSC-like phenotype (17). Therefore, our finding suggested that miR-143 and miR-145 may possess a similar function with miR-34a in controlling CSC characteristics of PCa, and regulate metastasis of PCa by targeting CD44.

Previously, it was found that miR-145 directly targets the 3′UTRs of the stemness factors Oct4, Sox2, and Klf4 in ESCs (24) and the stemness factor c-Myc also is a direct target for miR-145 (35). Yang et al (36) and Chiou et al (37) demonstrated that miR145 repressed CSCs characteristics by targeting Oct4 and Sox2 in glioblastoma-CD133+ and lung adenocarcinoma-associated CSCs. Our results showed that miR-145 repressed the expression of Oct4, c-Myc and Klf4 of PC-3 cells. Thus, miR-145 may regulate CSC characteristics of PC-3 cells, at least in part, by directly targeting Oct4, c-Myc, and Klf4. In this study, the results also showed that miR-143 play a similar role to miR-145 regulating CSC characteristics of PC-3 cells and repressed the expression of Oct4, c-Myc, and Klf4. However, how miR-143 regulate the stemness factors and the exact mechanism of miR-143 regulation of CSC characteristics need to be further explored. We did not detect the expression of Sox2 in PC-3 cells by western blot analysis. The transcripts for Sox2 were not detected in the PC-3 cells by reverse transcription (RT)-PCR (38). Thus, Sox2 may not be the factor regulated by miR-143 and miR-145 in PC-3 cells.

CSCs and EMT-type cells have been proposed to play critical roles in cancer metastasis as demonstrated in several human malignancies (39). Recent evidence has demonstrated that the EMT can generate cancer cells with properties of stem cells (13,40–42). This important finding implies a direct link between EMT and cancer stem cells. Thus, the discovery of molecular knowledge related to CSC characteristics and EMT in PCa is important. Previously it was found that miR-200 and let-7 played a critical role in linking EMT phenotype with stem cell signatures by regulating the expression of Lin28B and Notch1 (13). In this study, we found that miR-143 and miR-145 regulated CSC characteristics of PCa. Importantly, our previous study found that overexpression of miR-143 and miR-145 repressed EMT of PC-3 cells of PCa (16). Therefore, miR-143 and miR-145 might be the new links between the characteristics of cancer stem-like cells and EMT in PC-3 cells.

In our study, morphologically typical holoclones were not detected in PC-3 cells. The results of Pfeiffer and Schalken (27) are in agreement with ours. However, other studies showed that the number of holoclones formed by PC-3 cells was composed of approximately 10% of all clones (43,44). The main reason for this phenomenon is that higher plating density was adopted in our and Pfeiffer and Schalken studies compared with previous report in which PC3 cells were plated under diluted conditions (~1 cell per well) (44,45). Moreover, it was demonstrated earlier that PC-3 cells had an intrinsic impaired cell-cell adhesion because of the E-cadherin and associated α-catenin were frequently reduced or absent in this cells, thus, they were not able to form tightly packed colonies (45). Additionally, continuous and rapid change of different colony types made the colonies difficult to distinguish from each other (27,45). The definition of the three colony morphologies differs somewhat from each other, and there are no strict borderlines between the colony types, which makes the grading fairly subjective (27). 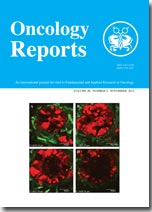