Recently, many studies have focused on investigating the role of non-coding RNAs (ncRNAs), RNA sequences that are not translated into protein. Not only are the functions of ncRNAs only partially understood, but the clinical or biological significance of most ncRNAs has not yet been determined. Among ncRNAs, long ncRNAs, consisting of over 200 bases have been reported to associate with DNA-binding proteins, such as chromatin modifying complexes, and certain ncRNAs can epigenetically regulate the expression of multiple genes through this mechanism (1–3).

Hox transcript antisense intergenic RNA (HOTAIR) is a long ncRNA that was identified from a custom tilling array of the HOXC locus (12q13.13) (4). HOTAIR forms a complex with the polycomb-repressive complex 2 (PRC2), composed of EZH2, SUZ12 and EED, to trimethylate histone H3 at lysine 27 (H3K27me3), thereby inhibiting HOXD gene expression. Thus, HOTAIR epigenetically regulates the expression of HOXD, a gene located on a separate chromosome. Recent studies have demonstrated the clinical significance of HOTAIR in surgical solid malignancies. Gupta et al found that patients with high HOTAIR expression in primary lesions had a poorer prognosis for both overall- and metastases-free survival than those with low HOTAIR expression in breast cancer (4). Moreover, we reported the clinical significance of HOTAIR in patients with advanced colorectal cancer (CRC), where HOTAIR was more highly expressed in cancerous tissues than in noncancerous tissues (5). High HOTAIR expression correlated well with the presence of liver metastases, and was significantly associated with poorer prognoses. In addition, we found that HOTAIR expression was associated with a genome-wide reprogramming of PRC2 (SUZ12, EZH2 and H3K27me3) by gene set enrichment analysis using cDNA array data from a pilot study (5). Since HOTAIR expression has clinical significance in both breast and colorectal cancers, we expect that this ncRNA may also play an important role in other intractable malignancies.

Hepatocellular carcinoma (HCC) is one of the most common cancers in the world. In Japan, HCC is an intractable tumor, causing approximately 30,000 deaths per year and representing the third leading cause of death from malignant neoplasms in men, and the fifth leading cause of death from malignant neoplasms in women (6,7). The major causes of HCC are viral infections, alcohol and tobacco use. While efforts have been made to identify appropriate prognostic markers for HCC (8–12), including primary tumor size, elevated AFP levels, and gene expression markers in the primary tumor, these method have not proven adequate to predict the prognosis of all HCC patients. In addition, few studies describing the expression of ncRNAs and their clinical significance in HCC have been published. In the present study, we determined the clinicopathological significance of HOTAIR expression in HCC patients, and investigated whether HOTAIR is a useful prognostic indicator in HCC patients.

A total of 64 patients with HCC who underwent surgery at Beppu Hospital were enrolled in this study. The resected tumor and paired non-tumor tissue specimens were immediately frozen in liquid nitrogen and kept at −80<C until analysis. Frozen tissue specimens were homogenized in guanidinium thiocyanate, and total RNAs were obtained by ultracentrifugation through a cesium chloride cushion. Written informed consent was obtained from all patients. All patients were closely followed after surgery at regular one-month intervals.

HepG2 cells, human liver cancer cells, were provided by the Cell Resource Center for Biomedical Research, Institute of Development, Aging and Cancer, Tohoku University, Japan. All cell lines were maintained in Dulbecco’s modified Eagle’s media (DMEM) supplemented with 10% fetal calf serum and antibiotics. We cultured the cells at 37°C in a humidified atmosphere of 5% CO2 and 95% air.

To generate a HOTAIR expression lentiviral vector, we amplified full-length human HOTAIR by PCR using MCF7 cDNA. Lentiviruses were produced by transient transfection of HEK293T cells with pCMV-VSV-G-RSV-Rev, pCAG-HIVgp, and either CSII-CMV-HOTAIR or CSII-CMV-MCS (empty) plasmid DNAs (5′-XhoI and 3′-NotI sites) using Lipofectamine 2000 (Invitrogen), following the manufacturer’s protocol. Forty-eight hours after cotransfection, the lentivirus-containing supernatant was collected and passed through a 0.45-μm filter. The titer of the lentivirus vector in filtered supernatants was estimated by measuring the concentration of HIV p24 gag antigen with an ELISA kit (Perkin-Elmer Life Science).

Cell proliferation was assessed by 3-(4,5-dimethylthiazol-2-yl)-2,5-diphenyl tetrazolium bromide (MTT) assay. In brief, we plated HepG2 cells infected with either the human HOTAIR full-length lentiviral vector or the empty lentiviral vector, in 96-well tissue culture plates at a density of 5.0×103 cells per well. At different time points (24, 72, and 120 h after plating, representing the 0-, 48-, and 96-h time points respectively), 10 μl MTT (5 mg/ml in phosphate-buffered saline) was added to each well, and plates were incubated for an additional 4 h at 37°C. The colored formazan product was then dissolved in 100 μl DMSO. We then evaluated mitochondrial activity, reflecting cellular growth and viability, by measuring the optical density at a test wavelength of 570–650 nm using a microplate reader (Bio-Rad, Japan); results were expressed as optimal density per milligram protein (OD/mg protein).

The significance of differences between two groups was estimated using the Student’s t-test and the χ2 test. Overall survival curves were plotted according to the Kaplan-Meier method, with the log-rank test applied for comparison. Variables with a p-value of <0.05 by univariate analysis were used in subsequent multivariate analysis on the basis of the Cox proportional hazards model. All differences were considered statistically significant when p<0.05. Statistical analyses were conducted using JMP 5 software (SAS Institute).

For GSEA (14), we used GSE27462 in the GEO database; this was a dataset for RNA expression profiles collected using a genome tiling array in 10 HCC samples (15). HOTAIR expression was treated as a binary variable divided into low or high expression according to medians. For functional gene sets for GSEA, we used gene sets arising from global occupancy of H3K27me3, and EZH2, a PRC2 subunit induced by HOTAIR overexpression in MDA-MB-231 breast cancer cells (4). As a metric for ranking genes in GSEA, the difference between the means of samples with low and high HOTAIR expression was used, and other parameters were set to default values.

We first evaluated HOTAIR expression in primary tumors from HCC patients (n=64) by quantitative real-time PCR. From these data, we divided the 64 patients with HCC into a HOTAIR high expression group (n=13) and a low expression group (n=51) (Fig. 1A). In consideration of clinical applications, we set cut-off values as the upper limit of normal samples, and we found a HOTAIR/GAPDH ratio of 0.027 in HCC samples. Patients with high HOTAIR expression had a significantly poorer prognosis with regard to overall survival and a significantly larger tumor size than those with low HOTAIR expression (p<0.01) (Fig. 1B). Clinicopathological factors were analyzed between groups (Table I), and no significant differences in other clinicopathological factors or in recurrence-free survival were noted between the high and low expression groups (data not shown).

HOTAIR expression and clinicopathological features of the HCC patients.

Recently, researchers have been searching for novel biomarkers to predict tumor recurrence in patients who have undergone liver transplantation (16). In the present study, we showed that high HOTAIR expression in primary HCC could be a useful marker for predicting HCC recurrence since HCC cases can be clearly categorized into high and low expression groups.

In previous studies, including ours, HOTAIR expression was shown to interact with multiple genes in cooperation with PRC2 (5), suggesting an important role for HOTAIR in tumor growth and tumorigenicity of breast and colorectal cancers. In addition, Yang et al reported that long ncRNAs, including HOTAIR, are expressed at high levels in HCC tumors in vivo(15). HOTAIR and other long ncRNAs, such as XIST, and other unidentified ncRNAs, may play significant roles in tumor growth in cooperation with PRC2 and histone modification genes in HCC (17–19). In the present study, however, GSEA results showed that the expression profiles generally induced by H3K27me3 and EZH2, a PRC2 element, were not significantly associated with HOTAIR expression in HCC. Therefore, this ncRNA may cooperate with other molecules or in different pathways in HCC, rather than functional with PRC2 complex proteins, and further research is required to fully elucidate these mechanisms.

In conclusion, certain HCC patients express the long ncRNA HOTAIR, and HCC patients with high HOTAIR expression exhibits poorer prognoses than those with low HOTAIR expression. HOTAIR expression in primary HCC tumors may be a prognostic marker in HCC; however, the clinical significance of HOTAIR expression in HCC appears to be less important than that in breast and colorectal cancers, including parameters such as histological grade, tumor depth and lymph node metastasis. Our data demonstrate the need for further study to support the use of ncRNAs as new clinical indicators of poor prognosis in HCC.

The authors thank T. Shimooka, and M. Kasagi for their technical assistance and H. Miyoshi (RIKEN BioResource Center) for providing the lentiviral vector plasmid DNA. This study was supported in part by the following grants and foundations: CREST, Japan Science and Technology Agency (JST); Japan Society for the Promotion of Science (JSPS) Grant-in-Aid for Scientific Research (grant nos. 20390360, 20591547, 20790960, 21591644, 21791295, 21791297, 215921014 and 21679006); the Funding Program for Next Generation World-Leading Researchers (LS094); NEDO (New Energy and Industrial Technology Development Organization) Technological Development for Chromosome Analysis; and Grant-in-Aid from the Tokyo Biochemical Research Foundation. 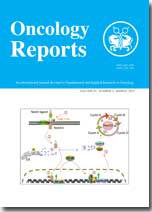