microRNAs (miRNAs) are a class of non-coding small RNAs that act as negative regulators of gene expression by binding to the 3'-untranslated region (3'-UTR) of target mRNAs. Tumor protein p53, a transcriptional factor, plays an important role in the progression of tumorigenesis. miR-150 was the only miRNA predicted to target 3'-UTR of p53 by Targetscan. In order to investigate the function of miR-150, p53 and relevant miRNAs in non-small cell lung cancer (NSCLC), we constructed two expression vectors of p53 (pcDNA3.1-p53 and pcDNA3.1-p53-3'-UTR) and two report vectors (pGL3-p53-3'-UTR and pGL3-p53-3'-mUTR). The activity of luciferase transfected with miR-150 mimics was lower by 30% when compared to that of the miRNA-negative control (miRNA-NC). Moreover, the p53 protein was downregulated by at least 50% when miR-150 mimics were cotransfected with pcDNA3.1-p53-3'-UTR when compared to miRNA-NC. We also determined the expression of miR-150 and p53 in NSCLC patient tissue samples. The expression of miR-150 in T2 stage tissue samples was higher than that in T1 stage tissue samples. The corresponding target gene p53 was correlated with miR-150 expression. In the present study, we further analyzed the cell cycle distribution. The cells transfected with pcDNA3.1-p53 were significantly arrested in the G1 phase when compared to the control cells. When miR-150 mimics were cotransfected with pcDNA3.1-p53-3'-UTR, the percentage of cells in the G1 phase was significantly lower by 4% when compared to miRNA-NC. To identify miRNAs that are regulated by the p53 protein, qRT-PCR was performed after pcDNA3.1-p53 transfection. miR-34a, miR-184, miR-181a and miR-148 were upregulated significantly. However, there was no distinct difference in the expression of miR-10a, miR-182 and miR-34c. Our results showed that miR-150 targets the 3'-UTR of p53, and p53 protein promotes the expression of miRNAs which affect cell cycle progression. These findings suggest that miR-150, p53 protein and relevant miRNAs are members of a regulatory network in NSCLC tumorigenesis.

microRNAs (miRNA) are small non-coding RNA molecules that inhibit gene expression at the transcriptional and posttranscriptional level by binding to the 3′-untranslated region (3′-UTR) of target mRNAs (1–4). miRNAs can bind to partially complementary recognition sequences of mRNA, subsequently causing mRNA degradation or translation inhibition, thus effectively silencing their target genes (5–7). Bioinformatic analysis of known miRNAs suggests that the majority of mRNAs can be targeted by miRNAs and that a single miRNA can regulate several hundred genes (8,9). miRNAs have been reported to participate in many important cellular processes, such as apoptosis, cell differentiation and proliferation, tumor suppression, development and metabolism (3,7–14). In recent years, more and more miRNAs have been detected by microarray analysis or other advanced technologies. At the same time, more protein factors have been confirmed to affect the expression of miRNAs, such as p53 (12,15,16). Thus, in order to elucidate the molecular mechanisms associated with non-small cell lung cancer (NSCLC) cell cycle arrest, identification of the regulatory network of miRNAs and proteins is critical.

To identify miRNAs which are differentially expressed in NSCLC and corresponding non-tumor lung tissues, miRNA solexa analysis was performed. Seven miRNAs were chosen for further study. All of the candidate miRNAs which have been verified in our laboratory play an important role in NSCLC cell cycle arrest. Potential target genes of 7 miRNAs were predicted by TargetScan (Table I). All proteins can regulate the cell cycle. To further identify the miRNAs that may regulate the expression of p53 or be regulated by p53 protein, we performed a prediction using software and constructed two expression vectors of p53 (with or without 3′-UTR). Only miR-150 was predicted to bind to the 3′-UTR of p53 by TargetScan software. The p53 expression vector contained the coding sequence (cd) only (pcDNA3.1-p53) and cds with 3′-UTR containing the binding sequences of miR-150 (pcDNA3.1-p53-3′-UTR) were constructed, respectively. Our results showed that miR-150 targets the 3′-UTR of p53 and reduces G1 phase arrest in the H1299 cell line triggered by p53. miR-34a, miR-184, miR-181a and miR-148 were significantly upregulated in the H1299 cells transfected by pcDNA3.1-p53. Moreover, the expression of miR-34a and miR-184 was consistent with p53 in the NSCLC cell lines, including SPCA-1, H1299, A549 and HCC827. These findings suggest that miR-150, p53 protein and relevant miRNAs may be members of a regulatory network in NSCLC tumorigenesis.

The 3′-UTR of the tumor protein TP53 (p53) gene containing the miR-150 binding site (665 bp) was subcloned downstream of the firefly luciferase reporter gene in the pGL3 vector (Promega, Madison, WI, USA) and designated as pGL3-p53-3′-UTR. The plasmid pGL3-p53-3′-mUTR which contained the mutated binding site of miRNA-150 in the 3′-UTR was also constructed. The cds of p53 with or without the miR-150 binding sequence were cloned into the pcDNA3.1 (−) plasmid and named pcDNA3.1-p53 and pcDNA3.1-p53-3′-UTR, respectively. The primer sequences used in this study are shown in Table II.

Primer sequences used in this study.

Total RNA was extracted from the cell cultures using TRIzol reagent (Bio Basic Inc., Toronto, Canada) according to the manufacturer’s instructions. Reverse transcription was performed using the M-MLV Reverse Transcriptase cDNA Synthesis kit (Takara, Dalian, China). A cDNA library of miRNAs was synthesized by the QuantiMir cDNA kit (Takara). U6 snRNA and the housekeeping gene 18S RNA were used as the endogenous control for miRNA and mRNA, respectively. The target genes and controls were treated under the same condition and analyzed by qRT-PCR using SYBR Premix Ex Taq™ (Takara) according to the manufacturer’s protocol.

Protein for western blot analysis was precipitated according to the standard protocol (17–20). Equal amounts of protein samples were subjected to SDS-polyacryl-amide gel electrophoresis (SDS-PAGE) and then transferred to a PVDF membrane. The membrane was soaked in Tris-buffered saline (TBS)-Tween buffer containing 5% low-fat milk for 60 min with gentle shaking and then incubated with a specific antibody overnight followed by washing and incubating with a secondary antibody and the final chemiluminescence ECL (Thermo Scientific, Rockford, IL, USA) detection of the bands. Protein bands were quantitated by densitometric analysis using Image Lab analysis software and expressed as the fold of the control after being normalized to GAPDH. The primary antibodies used were rabbit anti-p53 (1:1,000) and mouse anti-GAPDH (1:1,000). The secondary antibodies were rabbit anti-mouse (1:10,000) and mouse anti-rabbit (1:10,000). All antibodies were purchased from Cell Signaling Technology.

Cells were fixed in 70% ethanol for 12 h at 4°C. After washing with phosphate-buffered solution (PBS), cells were treated with RNase A (50 μg/ml) and stained with propidium iodide (PI; 25 μg/ml) for 30 min at 37°C. Samples were analyzed using MoFlo XDP flow cytometer (Beckman Coulter, Inc., Brea, CA, USA) and the distribution of cell cycle phases was determined using FlowJo software. The phase ratio (%) was calculated as the percentage of cells in the G1/S/G2 phase.

Results are expressed as the group means ± SEM and analyzed using GraphPad Prism 5 software, using t-tests for 2-group comparisons and one-way ANOVA for three or more group comparisons. A P<0.05 was considered to indicate a statistically significant result.

TargetScan and Pictar are two types of software broadly used on-line to predict the targets of miRNAs. Generally, the software was used to predict the targets of miRNA. In the present study, we used it to predict the target miRNA of p53. Results showed that only miR-150 targeted the 3′-UTR of p53. To confirm this, pGL3-p53-3′-UTR containing the miR-150 binding sequence and pGL3-p53-3′-mUTR were constructed (Fig. 1A and B). Analysis of the luciferase activity showed that the activity of miR-150 mimics cotransfected with pGL3-p53-3′-UTR was obviously inhibited when compared to miRNA-NC. However, the activity of miR-150 mimics cotransfected with pGL3-p53-3′-mUTR exhibited no difference when compared with miRNA-NC. Results of the luciferase activity assay indicated that mutated 3′-UTR affected the binding of miR-150 (Fig. 1C).

To further investigate whether miR-150 affects the expression of p53 at both the transcriptional and translational levels, we constructed an expression vector, pcDNA3.1-p53-3′-UTR, which contained the miR-150 binding sequence. The vector was cotransfected into H1299 cells with miR-150 mimics or miRNA-NC. The expression level of p53 mRNA in the miR-150 mimic-transfected H1299 cells was significantly decreased by 47% when compared with that in the miRNA-NC-transfected cells (Fig. 1D). Moreover, the expression level of p53 protein was significantly inhibited by 60% (Fig. 1E and F).

Data of the NSCLC patients.

Expression level of miRNAs in the H1299 cell line transfected with pcDNA3.1-p53

H1299 cell lines have a homozygous partial deletion of the p53 gene, and lack expression of p53 protein. To identify miRNAs which were differentially expressed after p53 ectopic expression in the H1299 cell line pcDNA3.1-p53 was transfected into H1299 cells. To avoid targeting by miRNAs in the 3′-UTR, the pcDNA3.1-p53 contained cds only. Western blot analysis was performed to detect the expression of p53 protein in the H1299 cell line transfected with pcDNA3.1 or pcDNA3.1-p53. The data showed that the p53 protein was significantly expressed in the H1299 cells transfected with pcDNA3.1-p53, but was not detectable in the control (transfected with pcDNA3.1) (Fig. 4A). qRT-PCR was then performed to identify miRNAs. Results showed that the level of miR-34a, miR-184, miR-181a and miR-148 expression were significantly upregulated by 2.8-, 2.5-, 2.2- and 1.7-fold of the control (Fig. 4B). However, the expression levels of miR-10a, miR-182 and miR-34c demonstrated no difference when compared with the control. The expression values were normalized to the levels of U6 RNA. In particular, all of the upregulated miRNAs play a cancer-suppressor role in lung cancer tumorigenesis which has been previously reported (21–27). Thus, these data indicate that p53 protein promotes the expression of miRNAs, particularly tumor suppressors miR-34a and miR-184.

Expression level of miR-34a, miR-184 and p53 was relevant in NSCLC cell lines

miR-150, p53 protein and miRNAs are members of a regulatory network in NSCLC tumorigenesis

H1299 cells have a homozygous partial deletion of the p53 gene, and lack expression of p53 protein (37). In the present study, we detected the expression variation of miRNAs when ectopic expression of p53 was present in the H1299 cell line. We found that miR-34a, miR-184, miR-181a and miR-148 expression was significantly upregulated. miR-34a and miR-181a have been reported as tumor-suppressor genes in neuroblastoma cells, urothelial bladder carcinoma, human brain glioma cells, head and neck squamous cell carcinoma and breast cancer (21–23,38–40). miR-34a can target many protein factors, such as the Notch-1 signaling pathway, Bcl-2, SIRT-1 and CDK1 and then promote the process of cell apoptosis and inhibit the cell cycle and proliferation (22,23,41,42). miR-181a can target k-ras, a typical oncogene (39). However, miR-184 and miR-148 have not been thoroughly studied. These results suggest that p53 protein may regulate the expression of various miRNAs which play a tumor-suppressor role in NSCLC cell lines. Yet, how p53 protein affects the expression of miRNAs is still unknown.

miR-150 was the only predicted miRNA which binds to the 3′-UTR sequence of p53. The luciferase activity analysis showed that the activity of miR-150 mimics cotransfected with pGL3-p53-3′-UTR was inhibited obviously compared to miRNA-NC. Western blot analysis also showed consistent results that the translation of p53 protein was inhibited significantly when miR-150 mimics were cotransfected with pcDNA3.1-p53-3′-UTR. miR-150 also reduces the cell cycle arrest triggered by p53. These results suggest that miR-150 may promote lung cancer tumorigenesis by targeting p53.

In conclusion, we confirmed that p53 is a direct target of miR-150, and overexpression of p53 promotes the expression of miRNAs including miR-34a, miR-184, miR-181a and miR-148. Our findings suggest that miR-150, p53 protein and relevant miRNAs consist of a complicated regulatory network in NSCLC tumorigenesis. 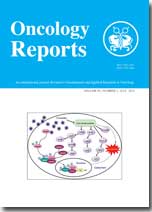