Biliary tract cancer (BTC), including intrahepatic and extrahepatic bile duct, gallbladder, and ampullary cancer, is one of the most aggressive cancer types (1,2). Surgical resection is currently the only curative treatment, but the prognosis is usually poor due to difficulties in early diagnosis and high recurrence rates following resection (3). Therefore, systemic chemotherapy is an important part of the treatment regimen to improve the prognosis for patients with advanced BTC.

A combination of gemcitabine (GEM) and cisplatin (GC) therapy has been considered the first-line standard chemotherapy regimen for advanced BTC, supported by results from the previous ABC-02 trial (4). Another Japanese phase III trial (FUGA-BT) reported that therapy using GEM plus S-1, an oral fluoropyrimidine prodrug therapy, was comparable to GC in terms of overall survival (OS). Thus, GEM plus S-1 (GS) is also considered a standard chemotherapy regimen to treat advanced BTC (5). As a new addition, the Kansai Hepatobiliary Oncology Group (KHBO) recently reported the results of a randomized phase III trial (KHBO1401-MITSUBA; ClinicalTrials.gov identifier, NCT02182778) that compared GEM, cisplatin and S-1 therapy (GCS) with GC in patients with unresectable or recurrent BTC (6). In this trial, GCS demonstrated superior efficacy compared with GC in terms of OS time (median OS, 13.5 months with GCS and 12.6 months with GC; hazard ratio, 0.79; 90% confidence interval, 0.628-0.996; P=0.046). Therefore, GCS may soon be a new standard treatment for patients with advanced BTC.

Despite the advances in chemotherapeutic regimens, there are no standard second-line treatments for advanced BTC. A recent phase III trial (ABC-06 study) showed improved patient survival when patients were treated with folinic acid, fluorouracil and oxaliplatin (FOLFOX) compared with active symptom control (ASC) after progression on GC therapy, but the improvement in median OS time with FOLFOX was modest (6.2 vs. 5.3 months, respectively) (7). The only trials currently reporting results are phase II trials with a limited number of patients (8–10). However, second-line chemotherapies, such as GC, GS, S-1 and GEM, are widely accepted in daily practice in Japan. Second-line chemotherapy is decided based on the regimen received as a first-line therapy. For patients treated with GC, second-line treatment options include S-1 single-agent chemotherapy or GS. However, it is difficult to determine the optimal regimens for patients who receive GCS as a first-line therapy. Thus, the present study aimed to evaluate the clinical outcomes of patients receiving second-line chemotherapy after first-line GCS using data from the KHBO1401 clinical trial.

Quantitative data are expressed as the median (range), and qualitative data are expressed as number and percentage. Categorical variables were compared using the χ2 and Fisher's exact tests. Mann-Whitney U tests were used to assess differences between the study groups. Survival curves were analyzed using the Kaplan-Meier method and log-rank test or the Gehan-Breslow test. The Benjamini and Hochberg method was applied for multiple comparisons. Statistical analyses were performed using GraphPad Prism V8.0 (GraphPad Software, Inc.) and R version 4.2.1 (The R Foundation for Statistical Computing). P<0.05 was considered to indicate a statistically significant difference.

A total of 83 patients who were refractory or intolerant to first-line GCS treatment, as identified in the trial, were used in the present study. Of these 83 patients, 51 (61%) received second-line chemotherapy (Fig. 1); 8 patients received GCS, 15 received GC, 4 received GS, 6 received GEM and 18 received S-1 therapy. The remaining 32 patients received BSC. The baseline characteristics of the patients are summarized in Table I. There were no significant differences between the study groups in terms of age, sex, primary tumor site, disease stage or GCS duration. However, the number of patients refractory to first-line GCS treatment was higher in the BSC group (P=0.0164). The baseline characteristics of patients who received second-line chemotherapy are summarized in Table II. The majority of patients (90%) had an ECOG-PS score of 0 or 1.

[i] GCS, gemcitabine, cisplatin and S-1.

Fluoropyrimidine-based regimens are the most common second-line regimens after GEM-based first-line therapy. However, few therapeutics have been considered as second-line therapies to be combined with fluoropyrimidines, and thus, none are currently recommended. Although the recent ABC-06 study demonstrated that second-line treatment with FOLFOX after GC resulted in improved patient survival compared with ASC for advanced BTC, it is unclear whether a doublet regimen that included FOLFOX would be superior to fluoropyrimidine alone (7).

S-1 is one of the most commonly used second-line chemotherapeutics. Several studies showed that S-1 second-line chemotherapy could be well tolerated by patients with advanced BTC after receiving first-line GEM or GC, but its efficacy was modest (14–16). Although S-1 seems to have some degree of antitumor activity in patients with GEM-refractory advanced BTC, S-1 single-agent chemotherapy may be insufficient to improve the prognosis (15,16). In the present study, the GS regimen had a high OS rate compared with other regimens; all patients who received GS had a PS of 0 and were intolerant to GCS. In addition, the total duration of the GCS treatment period was >24 weeks. Therefore, selection bias might affect OS. Furthermore, it may be difficult to compare the efficacy of each regimen accurately due to the small sample size. Expanded prospective studies are required to further explore the efficacy of these regimens.

Recently, the development of genomic sequencing in BTC has rapidly progressed, and favorable treatment effects of molecular targeting agents, such as isocitrate dehydrogenase-1 inhibitors and fibroblast growth factor receptor inhibitors, in BTC, have been reported (17–19). Furthermore, the development of immune checkpoint inhibitors is promising, and for tumors with high microsatellite instability, pembrolizumab can be administered for multiple cancer types in various organs, including BTC (20). With these new developments, progress continues to be made toward effective systemic therapies for advanced BTC. However, there remain some issues to be resolved, such as the amount of time it takes for the results of genomic testing to be obtained, the lack of methods to obtain a sufficient sample volume in unresectable cases, the lack of effective therapeutic agents for genetic alterations and the cost of genomic testing (19,21–23).

The datasets used and analyzed during the current study are available from the corresponding author upon reasonable request.

YS, HN and TI were responsible for the conception and design of the study. All the authors were involved in the study. All authors had full access to all the data reported in the study and had final responsibility for the decision to submit for publication. MK, SK, HW, DS, HE, HB, HK, TT, MU, MT, YN and EH collected and interpreted the data. YS, YN, KY and HN had full access to the raw data, analyzed the data and wrote the manuscript. TI and HN confirm the authenticity of all the raw data. All authors have read and approved the manuscript. 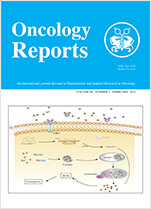