Cancer/testis (CT) antigens are considered target molecules for cancer immunotherapy. To identify novel CT antigens, immunoscreening of a testicular cDNA library was performed using serum obtained from a colon cancer patient who was immunized with a new dendritic cell vaccine. We isolated 64 positive cDNA clones comprised of 40 different genes, designated KP-CoT-1 through KP-CoT-40. Three of these putative antigens, including KP-CoT-23 (CCDC83), had testis-specific expression profiles in the Unigene database. RT-PCR analysis showed that the expression of 2 KP-Cot-23 variants was restricted to the testis in normal adult tissues. In addition, KP-CoT-23 variants were frequently expressed in a variety of tumors and cancer cell lines, including colon cancer. A serological western blot assay showed IgG antibodies to the KP-CoT-23 protein in 26 of 37 colon cancer patients and in 4 of 21 healthy patients. These data suggest that KP-CoT-23 is a novel CT antigen that may be useful for the diagnosis and immunotherapy of cancer.

Cancer/testis (CT) antigens are immunogenic proteins with expression restricted to the testis and a wide range of human tumor types, eliciting both humoral and cellular immune responses in cancer patients (1). They are considered ideal targets for vaccine-based immunotherapy, and more than 100 CT antigens, including MAGE, NY-ESO-1, GAGE, BAGE, LAGE, and SSX2, have been identified (2). CT antigens are divided into those that are encoded on the X chromosome (CT-X antigens) and those that are not (non-X CT antigens) (3). Many CT antigens exhibit heterogeneous expression patterns within the same tumor tissue (2,4). Therefore, multiple CT antigens are needed to develop polyvalent cancer vaccines that overcome the limited frequency and heterogeneity of CT antigen expression. CT antigens have been identified through various techniques, including T cell epitope cloning, MHC peptide elution, differential gene expression analysis, and serologic expression cloning (SEREX) (5–8). Using DNA microarray analysis, MAA-1A was identified (9). Recently, massively parallel signature sequencing (MPSS) was utilized to compare the mRNA expression profiles of testis, melanoma cell lines, and other somatic tissues (10). This resulted in the identification of CT45. In addition to these experimental approaches, in silico analyses have also identified CT antigens, including BRDT (11), CT46 (12), PAGE (13), and XAGE1 (14).

Among all these methods, SEREX seems to be effective for the identification of CT antigens. SEREX screening of various cancer types was broadened to include screening of cDNA libraries derived from allogeneic tumors, tumor cell lines, and testis (15,16). This investigation and similar studies by other researchers have led to the identification of more than 2,000 SEREX-defined antigens over several years (http://ludwig-sun5.unil.ch/CancerImmunomeDB/). CT antigens identified by SEREX include MAGE-A (16), NY-ESO-1 (17), SSX2 (18), SCP1 (19), NY-SAR-35 (15), SLCO6A1 (20), CAGE-1 (21), and BCP-20 (22). In the present study, we performed SEREX analysis to screen a testicular cDNA library with the aim of isolating novel CT antigens. In addition to a previously defined CAGE CT antigen (23), a novel CT antigen, KP-CoT-23 (CCDC83), was identified.

Human tumor tissues and sera were obtained from the Department of Pathology, Pusan National University Hospital after diagnosis and staging. Tissues were frozen in liquid nitrogen and stored at −80°C until use. The human colon cancer cell lines SNU-C1, SNU-C2A, SNU-C4, and SNU-C5; the human ovarian cancer cell lines SNU-8 and SNU-840; the human lung cancer cell lines SK-LC-5 and SK-LC-14; and the human breast cancer cell line MCF7 were obtained from the Korean Type Culture Collection (KTCC) and the American Type Culture Collection (ATCC). All these cell lines were maintained in RPMI-1640 medium (Gibco-BRL Life Technologies Inc., Grand Island, NY, USA) supplemented with 10% fetal bovine serum, 2 mM l-glutamine, 100 U/ml penicillin, and 100 μg/ml streptomycin. The study was conducted under an approved protocol from Ethical Committeee in this institution.

Preparation of cDNA library and sera

Poly(A)+ RNA from normal testis was purchased from Clontech Laboratories Inc. mRNA (5 μg) was used to construct a cDNA library in the ZAP Express vector (Stratagene, La Jolla, CA, USA), following the manufacturer's instructions. The library contained approximately 1 million recombinants and was used for immunoscreening without prior amplification. Serum was prepared from a colon cancer patient and was diluted 1:200 for SEREX analysis. The colon cancer patient was immunized frequently (5 times) with a new dendritic cell vaccine (DC-Vac) into which autologous tumor lysate was loaded by electroporation and pulse. Serum from a human colon cancer patient was kindly provided by Dr Chi-Dug Kang (Pusan National University, Pusan City, Korea). The patient is a 56-year-old male with stage IV colon cancer. All sera from colon cancer patients and healthy individuals used in this study were diluted 1:200. To remove serum antibodies that react with Escherichia coli/bacteriophage-related antigens, sera were absorbed with E. coli/bacteriophage lysates as described by Lee et al (15).

Immunoscreening of the cDNA library was performed as previously described (15,22). Briefly, E. coli XL1 blue MRF cells were transfected with the recombinant phages, and then plated at a density of approximately 5,000 pfu/150-mm plate (NZCYM-IPTG agar). The plates were incubated at 37°C for 8 h, and transferred to nitrocellulose filters (Protran BA 85, 0.45 μm; Schleicher & Schuell, Keene, NH, USA). The filters were then incubated with a 1:200 dilution of the patient's sera, which had been preabsorbed with E. coli-phage lysate. The serum-reactive clones were detected with an AP-conjugated secondary antibody and visualized by incubation with 5-bromo-4-chloro-3-indolyl-phosphate/nitroblue tetrazolium (BCIP/NBT). After screening, the isolated positive clones were removed from the plate and preserved in suspension medium (SM) buffer with 25 μl of chloroform. Positive phages were mixed with a helper phage to co-infect XL-1 Blue MRF, and they were rescued into pBluescript phagemid forms by in vivo excision. The excised phagemids were transformed into the host bacteria (XLOLR) to amplify plasmid DNA for extraction and stock. The size of the inserted cDNA was determined by restriction enzyme digestion with EcoRI and XhoI. The cDNA was sequenced commercially (Macrogen, Seoul, Korea).

The cDNAs were prepared for use as templates for RT-PCR using the Superscript first strand synthesis kit (Invitrogen Life Technologies, Carlsbad, CA, USA) with 1 μg of total RNA. The specific primers used for KP-CoT-23 were GCGATGAAGGAAAAATGGAA (forward) and GAGC CAGTCATTCTCCCAGATIIIIIGATAACTGC (reverse). For blocking extension of non-specifically primed templates and generating consistently high PCR specificity, we used a dual priming oligonucleotide (DPO) which contains two separate priming regions joined by a polydeoxyinosine linker (Segene Ins. Seoul, Korea). PCR primers used to verify the CCDC83 variants were GGA TGTTGAAGAAGCGATGAAGGA (forward) and CCAGGG GGCCCAAGTTTACA (reverse). The cDNA template concentrations were normalized to the amplification of GAPDH. For PCR, a 20 μl reaction mixture containing 2 μl of cDNA, 0.2 mM dNTP, 1.5 mM MgCl2, 0.25 μM each of the gene specific forward and reverse primers, and 3 units of Taq DNA polymerase (Solgent, Daejun, Korea) was preheated to 94°C for 5 min, followed by 35 cycles at 94°C for 30 sec, 60°C for 30 sec, and 72°C for 1 min followed by a final elongation step at 72°C for 5 min. Amplified PCR products were analyzed on 1.5% agarose gels stained with ethidium bromide.

To generate His-tagged KP-CoT-23 proteins, we selected an open reading frame (ORF) cDNA from codons 514 to 1,748 within the CCDC83 ORF (NM_173556), including the target sequence for KP-CoT-23 variants. The PCR products contained the NdeI and XhoI restriction enzyme sites. The primers for the partial protein were GGAATTCCATATGGAAAACTCAGGG (forward) and CCGCTCGAGGAGAAAAGACTTCA (reverse). The PCR product was subcloned into the pET21a expression plasmid. E. coli BL21 cells containing the KP-CoT-23 plasmid were grown in LB liquid medium, and IPTG was added to a final concentration of 0.5 mM. Affinity chromatography using Ni-NTA resin (Qiagen) was performed to purify KP-CoT-23 recombinant protein. The purity of the recombinant protein was determined by SDS-PAGE and western blotting using anti-His antibody (Invitrogen Life Technologies) (Fig. 4C).

A 100 ng of purified 6X His-KP-CoT-23 protein was separated on a 10% SDS-PAGE and transferred to a nitrocellulose membrane (Hybond-ECL; GE Healthcare, Little Chalfont, UK). After blocking with TBST (TBS and 0.1% Tween-20) containing 5% skim milk for 1 h at room temperature, the membrane was incubated in sera (1:200 dilution) overnight at room temperature. The membranes were washed and incubated with horseradish peroxidase-conjugated sheep anti-human IgG antibody (GE Healthcare) (1:3,000 dilution) for 1 h at room temperature. After washing with TBST and incubating with chemiluminescence reagent plus (PerkinElmer, Waltham, MA, USA), the membrane was exposed to Kodak medical X-ray film.

A testis cDNA expression library containing approximately 2x105 clones was immunoscreened with serum from a colon cancer patient immunized with dendritic cells. As shown in Table I, 64 clones representing 40 genes were isolated, and the antigens were designated the names KP-CoT-1 through KP-CoT-40.

b Sequences were compared with those contained in the SEREX database of the Ludwig Institute for Cancer Research (http://ludwigsun5.unil.ch/CancerImmunomeDB/). Y and N indicate whether the antigen matched or did not match an antigen in the SEREX database, respectively.

When the cDNA sequences encoding the 40 colon cancer antigens were compared to those in the Cancer Immunome Database, 17 of the 40 antigens (43%) had been previously identified by SEREX analysis with any cDNA/serum combination, while the remaining 23 (57%) had not been previously reported (Table I). These included 3 genes with testis-specific expression in the UniGene database (KP-CoT-11, KP-CoT-23, and KP-CoT-27). Among the 3 genes with testis-specific profiles, KP-CoT-11, corresponding to sperm acrosome-associated protein (SPACA7), which was represented by 2 overlapping clones, was isolated. KP-CoT-27 was previously reported as a CT antigen, CAGE (23). KP-CoT-23 was identical to coiled-coil domain containing 83 (CCDC83). KP-CoT-2 (GKAP1), which was represented by 15 clones, was the most frequently isolated gene. Although GKAP1 mRNA expression was observed in some normal tissues, the highest expression was observed in the testis as previously reported (24).

Characterization of the KP-CoT-23 clone

Summary of KP-CoT-23 a and b expression in cancer cell lines.

In the current study, 40 distinct antigens were isolated from colon cancer by SEREX and were designated the names KP-CoT-1 to KP-CoT-40. Twenty-three of the 40 antigens (57%) had not been previously identified by SEREX analysis with any cDNA/serum combination. There were 3 genes with testis-specific expression in the UniGene database and in the literature, including KP-CoT-11 (SPACA7), KP-CoT-23 (CCDC83), and KP-CoT-27 (CAGE), a CT antigen previously identified by SEREX.

KP-CoT-27 (CAGE) was previously reported as a CT antigen located on chromosome Xp22. CAGE was highly expressed in several cancer types, including gastric cancer, cervical cancer, and lung cancer (25). Based on an ELISA analysis, anti-CAGE antibodies were detected in sera from 12 of 45 endometrial cancer patients, 2 of 20 melanoma patients, and 4 of 33 colon cancer patients. Although CAGE was isolated from gastric and endometrial cancer, we were the first to find it in colon cancer by SEREX. Detection of anti-CAGE antibody in 7 of 13 (53.8%) patients with microsatellite instability-positive endometrial cancer and in 1 of 3 patients with atypical endometrial hyperplasia (26) suggests that CAGE may be useful for the prognosis or early diagnosis of patients with microsatellite instability-positive endometrial cancers. The expression of CAGE is cell cycle-regulated (25) and confers drug resistance by regulating expression of p53 through HDAC2 (27).

The isolated KP-CoT-23 clone matched exons 1-5 of the 11 exons of the CCDC83 gene, and there were 2 KP-CoT-23 variants, named KP-CoT-23a and KP-CoT-23b. The KP-CoT-23a, and b genes were frequently expressed in several tumor types and cancer cell lines, especially in colon cancer tumor (4/16 and 12/16, respectively) and colon cancer cell lines (9/10 and 10/10, respectively) (Table II). Since CT antigen expression rarely exceeds 40% in a given cancer type (2,28) and is generally heterogeneous (29), the expression profile of this CT antigen in cancer cells was extraordinary. SEREX-derived CT antigens have been shown to induce CD8+ CTLs (30,31), and a positive correlation was observed between serum positivity for IgG antibody and induction of CD8+ CTLs against the cancer testis antigen NY-ESO-1 (31). Western blot analysis of 37 sera samples from colon cancer patients showed that 23 patients had reactivity against the recombinant KP-CoT-23. The significant frequency of IgG antibody responses against KP-CoT-23 suggested that the strong immunogenicity and CD4 and CD8 T-cell responses against the antigen should be investigated. 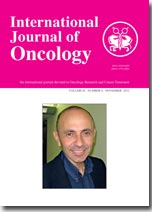