Icariin (ICA), a flavanoid isolated from herbal Epimedium, has multiple biological activities. The present study investigated the effects of ICA on the proliferation and alkaline phosphatase (ALP) activity (an index for PDLC differentiation) of human periodontal ligament cells (hPDLCs) inhibited by lipopolysaccharide (LPS). hPDLCs were cultured in vitro and stimulated with various concentrations of ICA. The proliferation ability of hPDLCs was detected by an MTT assay. The activity of ALP was determined by the p‑Nitrophenyl phosphate method, and the expression of ALP was analyzed by reverse transcription polymerase chain reaction and western blot analysis. ICA exhibited a dose-dependent effect on the proliferation of hPDLCs in a suitable concentration range, from 10‑6 to 10‑8 mol/l, and with a mediate optimal concentration (10-6 mol/l). The alkaline phosphatase activity was markedly inhibited in 10 µg/ml LPS‑treated PDLCs and this inhibition was suppressed in the presence of icariin at a concentration of 10-6 mol/L following prolonged treatment (96 h). Therefore, this study provided insight into the use of ICA for periapical tissue regeneration.

Periodontitis is one of the most widespread infectious diseases in humans. It is the predominant cause of tooth loss and is associated with a number of systemic diseases, such as diabetes and cardiovascular disease (1). Periodontitis is stimulated by a variety of factors. For example, lipopolysaccharide (LPS), which acts as an endotoxin and elicits strong immune responses, is important in the pathogenesis of periodontitis. LPS directly induces tumor necrosis factor-α release from macrophages, and is the leading stimulus that initiates the host response in the periodontal pocket and activates macrophages to release proinflammatory cytokines (2–5). Moreover, LPS was observed to exhibit a significant cytotoxic effect on periodontal ligament stem cells (PDLSCs), and affect the self-renewal and osteogeneic differentiation potential of PDLSCs (6).

Icariin (ICA) is the predominant active ingredient of Herba Epimedii, which is a herb used in traditional Chinese and alternative medicine. ICA increases trabecular bone mineral density in ovariectomized rats and stimulates osteoblastic cell proliferation and differentiation (14). Other studies have demonstrated that ICA and its glycosides accelerated osteoblastic but suppressed osteoclastic differentiation (15). In the present study, the effect of ICA on human PDLCs (hPDLCs) inhibited by LPS was investigated, with the aim of identifying a therapeutic agent for the treatment of periapical disease resulting from bacterial infection.

An ALP staining kit (Sigma-Aldrich) was used. Subsequent to fixation with 70% ethanol, cells were incubated with a solution of 0.25% naphthol AS-BI phosphate and 0.75% Fast Red Violet LB Base dissolved in 0.1 M Tris buffer (pH 9.3). The ALP activity assay was conducted according to the manufacturer’s instructions and normalized on the basis of protein concentrations.

Statistical significance was assessed by two-tailed Student’s t-test or analysis of variance. P<0.05 and P<0.01 were considered to indicate a statistically significant difference.

Following primary culture for 4–10 days, fibroblast-like cells with a long fusiform shape emerged beside the tissue block (Fig. 1A). When subcultured to the fourth generation, cells adhered to the bottom of the culture plate and were observed to exhibit a star- or long fusiform-like shape under the microscope. Cell cytoplasm was plump with round or oval nuclei. Cell arrangement was observed to be in a gyrate or radial shape (Fig. 1B). To confirm the origin of cultured cells, various types of stains were applied. Hematoxylin and eosin-stained cell bodies showed long fusiform- or star-like shapes. Nuclei were rounded or oval-shaped and located in the center of the cell body. Cytoplasm stained with anti-vimentin polyclonal antibody appeared brown, while keratin was not stained (Fig. 1D and E). These results suggested that isolated cells had an interstitial opposed to an epithelial origin.

Effects of icariin on hPDLC proliferation

High ALP activity is a well-known index for hPDLC ossification. Previous studies have shown that LPS inhibited hPDLC differentiation and this process was associated with ALP activity decreases. When icariin (10−5 mol/l) was added to media containing LPS, the ALP activity was not changed at ~24 h; however, following incubation for 96 h, hPDLCs exhibited high ALP activity (Table II).

To identify at which level ALP activity returned to normal levels, RT-PCR and western blot analysis were used to measure the gene expression and protein levels of ALP, respectively. The RT-PCR results showed that no significant ALP expression difference was detected after 24 h. Differentiation emerged between the LPS group and icarrin-treated group after 96 h. The ALP activity of the icariin group was greater than that observed in the control group (P<0.01) (Fig. 2).

These results suggested that the ALP gene expression level that had been inhibited by LPS was recovered by icariin following prolonged exposure. These results were similar in the western blot analysis (Fig. 3). LPS suppressed ALP expression at 24 and 96 h, while icariin accelerated this inhibition at 24 h, but markedly increased the expression at 96 h, exceeding the level of the control group (P<0.01). Thus, the ALP activity fluctuation was directly correlated with the protein level of the enzyme, which was controlled by the ALP expression.

The apex dentis lesion of the un-develped permanent teeth of teenagers could be medically induced to apical foramen occlusion. Yang et al(17) observed that the occlusion was hindered by the accumulation of dentin, osteoid dentin, cementum and mineralization, which differentiated from parodontium connective tissue. Parodontium predominantly consists of PDLCs and collagenous fiber (18). PDLCs are heterogenic multipotential stem cells that possess important biological functions. PDLCs proliferate and differentiate into osteoblasts, which synthesize periodontal ligament, alveolar bone and cementum, thus repairing and regenerating periapical tissue (19).

Herba epimedii is a traditional Chinese herb that has multiple medical effects. Modern pharmacological studies have suggested that icariin extracted from herba epimedii inhibited osteoclast function and accelerated the proliferation and differentiation of osteoblasts (20). Icariin also decreased the cytotoxicity resulting from LPS; however, the detailed mechanism of this action remains to be elucidated. In the present study, the effects of icariin on PDLC proliferation in an in vitro culture were investigated. The results suggested that icariin significantly accelerated PDLC proliferation at a concentration range between 10−7 and 10−6 mol/l in a concentration-dependent manner. A concentration of 10−6 mol/l exhibited the strongest effect.

ALP activity is one of the most important markers for ossification (7). ALP conducts dephosphorylation, destroys inhibitors of mineralization and acts as a calcium binding protein or phosphate transporter to promote ossification. ALP activity in PDLCs indicates ossification transformation. LPS, a pathogenic sugar residue isolated specifically on Gram negative bacteria, is a toxic antigen to cells in the periapical tissue (21). LPS is important in the development of periapical diseases (7). In hPDLCs, LPS was observed to decrease the ALP activity, leading to a loss of potential to differentiate into osteoblasts and cementoblasts. Thus, increasing the ALP activity in inhibited PDLCs is crucial for PDLC regeneration and differentiation. The addition of icariin to LPS-inhibited PDLCs increased ALP activity following exposure for >96 h, while a short exposure period (~24 h) did not show a marked increase. The molecular mechanism underlying the antagonism was suggested to be mediated by icariin increasing ALP gene and protein expression levels, which promotes ALP activity. Improved ALP activity induced PDLC renewal and the potential for differentiation. This provided insight into the use of icariin as a treatment for periapical disease resulting from LPS.

This study was supported by the Natural Science Foundation of Heilongjiang province (grant no.41400649-6-12281). 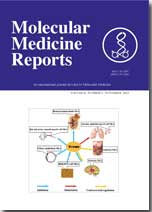