AKT1 and AKT2 mutations in lung cancer in a Japanese population

Mutations of the AKT1 (v-akt murine thymoma viral oncogene homologue 1) gene at amino acid 17 (E17K) and in the kinase domain of the AKT2 gene have been reported in non-small cell lung cancer (NSCLC). We investigated AKT1 and AKT2 mutations (n=146 and n=124, respectively) in surgically-treated NSCLC cases. The presence or absence of AKT1 (E17K) and AKT2 kinase domain mutations was analyzed by direct sequencing. Although there were no AKT1 mutations at the N-terminal, an AKT2 mutation was detected in 1 of 124 lung cancer patients (0.8%). The sample was also analyzed for EGFR, K-ras, PIK3CA and BRAF mutations. In addition to the AKT2 missense mutation (R371H), this lung adenocarcinoma was shown to harbor an EGFR (L861Q) and a PIK3CA (E542Q) mutation. This study demonstrated that mutations in the kinase domain of AKT2 occur in a small percentage of Japanese patients with lung cancer, while E17K AKT1 mutations do not occur at all. 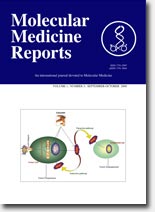