We have investigated Lf immunoexpression as well as its biological meaning in 71 formalin-fixed, paraffin-embedded surgical samples of endometrial carcinomas (EC); 64 EC were endometrioid type, whereas 7 were non-endometrioid carcinomas. Immunohistochemistry was performed by primary antibodies against Lactoferrin (Lf), estrogen receptor (ER), progesterone receptor (PR) and Ki-67 antigen. Quantification of Lf immunoreactivity was performed using an intensity-distribution (ID) score. Moreover, the AgNOR technique according to guidelines of the Committee on AgNOR Quantification was used to assess the proliferation rate (NORA). A variable expression of Lf was revealed in 43 cases (61%) of EC. Endometrioid type carcinoma showed a significant higher Lf ID-score than non-endometrioid type; in contrast, no relationships were demonstrated between Lf immunoexpression and histologic grade, stage, clinical course as well as proliferative activity of EC. Moreover, a significantly higher Lf ID-score was encountered in ER-positive carcinomas. Survival analysis in EC indicated the architectural, nuclear and combined histologic grades as well as the stage, PR, Ki-67 and NORA as significant parameters. The utilization of Lf as a prognostic marker, able to identify patients at different risk of death, or alternatively, its clinical application as therapeutic agent, must be considered with great caution. 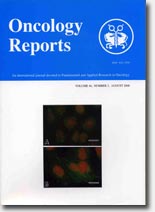