Citrus fruits have been used as edible fruit and a component of traditional medicine for various diseases including cancer since ancient times. Herein, we investigated the anticancer activity of flavonoids of Citrus unshiu Marc. (FCM) focusing on anti-metastatic effects. We prepared FCM and performed experiments using MDA-MB-231 human breast cancer cells. FCM inhibited TNF-induced cancer cell adhesion to human umbilical vein endothelial cells (HUVECs) without showing any toxicity. FCM inhibited the expression of VCAM-1, but not of ICAM-1, on MDA-MB-231 cells as well as HUVECs. FCM inhibited protein kinase C (PKC) phosphorylation, but not Akt phosphorylation. FCM also inhibited cancer cell invasion in a dose-dependent manner, but not MMP-9 expression. In conclusion, this study suggested that FCM inhibits TNF-induced cancer cell adhesion to HUVECs by inhibiting VCAM-1 through inhibition of PKC, providing evidence that FCM have anti-metastatic activity by inhibiting adhesion molecules and invasion on human breast cancer cells.

With advances in medical science, the population of elderly cancer patients has been increasing. This elderly population has a lack of vital capacity, so they have a higher incidence of serious side effects from conventional chemotherapeutic agents. Therefore, modern chemotherapy strategy is emphasizing quality of life. Recently much interest has been drawn to the possibility of controlling cancer with minimal toxicity using flavonoids from fruit because the flavonoids in fruit can safely enhance anticancer effects (1–3).

Citrus fruits are edible and their dried peels have been used as a component of traditional medicine for various diseases including cancer since ancient times. Citrus unshiu Marc. called ‘Kamgyul’ in Korean is widely cultivated in Jeju island, Korea. The peels of Citrus unshiu Marc. are used in traditional herbal medicine and frequently prescribed in concert with other herbs for many kinds of disease including cancer. The flavoids isolated from Citrus fruit are mainly composed of hesperidin, naringenin, and nobiletin (4). These compounds have been reported to have some anticancer properties (5). We isolated the flavonoids from the Citrus unshiu Marc. fruit peel (FCM).

Most of cancer patients eventually die of cancer metastasis. Inhibition of the metastatic activity is one of the cancer treatment strategies. Metastasis consists of a series of sequential complicated steps. Initially, cancer cells have to detach from the primary lesion, and invade the basal membrane and move to other lesions though lymphatic system or blood vessels. Before invading the underlying basement membrane, the cancer cells temporarily adhere to endothelial cells, and then extravasate. The ability to adhere to the endothelial cell correlates with the capacity of cancer cells to form metastatic lesions (6,7).

Cell adhesion molecules (CAMs) are involved in a broad range of normal physiological processes, but the pivotal role of CAMs is emphasized by the fact that CAMs are involved in a variety of pathologies, especially cancer (8). Most of the cell adhesion molecules (CAMs) belong to four protein families: Ig (immunoglobulin) superfamily (IgSF CAMs), the integrins, the cadherins, and the selectins. Among IgSF CAMs, vascular cell adhesion molecule-1 (VCAM-1) and intracellular adhesion molecule-1 (ICAM-1) are regulated by NF-κB, closely related in structure, well known endothelial surface adhesion molecules involved in cancer cells (7). However, it has been reported that some highly metastatic cancer cells migrate and adhere to VCAM-1 rather than to ICAM-1 (9), suggesting that VCAM-1 may relate more to cancer metastasis by enhancing the adherence of cancer to endothelial cells. Therefore, it is important to discover that FCM have inhibitory effects on cancer adhesion and the expression of VCAM-1 and ICAM-1. We investigated the anticancer activity of FCM on the ability of cancer to adhere to the endothelial cells and elucidated the mechanism regarding the expression of VCAM-1 and ICAM-1.

Cell viability was determined colorimetrically using MTT reagent. Cells were seeded at 104 cells/well in 24-well plates. After treatments, 50 μl of 5 mg/ml MTT solution was added to each well and incubated for 3 h. The supernatants were aspirated and the formazan crystals were dissolved with 200 μl of 4 N HCl-isopropanol in each well. The optical density of the colored product was measured at 570 nm, as suggested by the manufacturer, using an Infinite 200 microplate reader (Tecan Austria GmbH, Grödig, Austria).

The cells were washed in ice-cold PBS and lysed in PRO-PREP protein extraction solution (iNtRON Biotechnology, Seoul, Korea). The samples were centrifugated at 13,000 rpm, for 15 min at 4°C. An aliquot of the whole cell lysate was subjected to sodium dodecyl sulfate (SDS)-polyacrylamide gel electrophoresis and transferred onto polyvinylidene difluoride membrane. Membranes, blocked with 5% nonfat milk in Tris-buffered saline (TBS) containing 0.05% Tween-20 for 2 h at room temperature, were incubated with anti-ICAM-1 and VCAM-1 antibodies at 1:1,000 in TBS containing 0.05% Tween-20 and 3% bovine serum albumin (BSA) for overnight at 4°C. The membranes were then incubated with horseradish peroxidase-conjugated anti-rabbit IgG (1:5,000) antibody for 1 h at room temperature. After washing, the membranes were developed using the ECL reagent (Bionote, Gyeonggi-do, Korea)

MDA-MB-231 cells were cultured for 3 days. The upper chamber of 24-well cell culture inserts (8 μm pore size, Falcon, Franklin Lakes, NJ, USA) were washed with a serum-free medium, coated with 100 μl of Matrigel (1 mg/ml) and dried for 30 min at 37°C. MDA-MB-231 cells treated with FCM were collected; 2×105 cells loaded to the upper chambers filled serum-free media, and 500 μl of RPMI media containing 10% FBS was added to the lower chambers. The invasion chambers were incubated for 24 h in a 37°C cell culture incubator. The non-invasive cells that remained on the upper surface of the insert membranes were removed by scrubbing. The cells on the lower insert membranes were stained with DAPI, and cells were counted under the fluorescence microscope. Each sample was measured in triplicate, and each experiment was repeated three times.

Each experiment was performed in triplicate. The results were expressed as the means ± SE. Significant differences were determined using the one-way analysis of variance (ANOVA) with post-test Neuman-Keuls for more than two groups and Student’s t-test for two groups. Statistical significance was defined as p<0.05.

At first, we assessed anti-proliferative effects of FCM on MDA-MB-231 cells. MTT test revealed that the growth of MDA-MB-231 cells was inhibited by FCM treatment only at a dose of 200 μg/ml (Fig. 1A). Next we performed adhesion assay to test the inhibitory effects on cancer cell adhesion to endothelial cells at the concentrations (10–100 μg/ml) where FCM did not show anti-proliferative effects. The adhesion assay revealed that FCM significantly inhibited TNF-induced cancer cell adhesion to HUVECs from the low dose of 10 μg/ml (Fig. 1B).

FCM inhibits cell invasion, but not through inhibition of MMP expression

Activation of PKC induces rapid changes in cell morphology, cell-cell adhesion, and cell migration (11). Therefore, we also performed Matrigel invasion assays to assess the effects of FCM on cancer cell invasion. FCM markedly inhibited cell invasion in a dose-dependent manner (Fig. 5A). To verify the molecular mechanisms, we also measured by gelatin zymographic analyses the activities of the secreted MMP-9 from FCM-treated cancer cells. As shown in Fig. 5B, FCM barely suppressed the gelatinolytic activities of secreted MMP-9, indicating that other mechanisms such as suppression of motility are involved in the inhibitory effects of FCM on cancer invasion.

Adhesive interaction of cancer cells out of blood vessels is an important step in cancer metastasis, because cancer cells are rapidly eliminated from the circulation unless they can adhere to new vasculature to establish new metastatic colonies. Therefore, the adhesion molecules such as ICAM-1 and VCAM-1 are important in the cancer metastasis. This study was designed to investigate the effects of FCM on cancer metastasis. Accordingly we examined the effect of FCM on cancer invasion and adherence in the endothelial cells, and elucidated its mechanism regarding the regulation of VCAM-1 and ICAM-1 in MDA-MB 231 human breast cancer cells. MDA-MB 231 cells are a proper model to study cancer metastasis, since the cells are more aggressive, possessing high metastatic potential, and are unresponsive to anti-estrogens due to estrogen receptor negativity (12). In this study, we found that FCM inhibited TNF-induced cancer cell adhesion to human umbilical vein endothelial cells (HUVECs) through inhibiting VCAM-1 expression, and that the inhibitory effects of FCM on VCAM-1 expression appear to be connected to inhibition of protein kinase C (PKC) phosphorylation induced by TNF.

Proteolytic digestion of the extracellular matrix (ECM) by secreted MMPs is one of major steps in cancer invasion (18,19). MMP-9 is also a biomarker for epithelial mesenchymal transition (EMT) (20). When we measured the activities of the secreted MMP-9 from FCM-treated cancer cell by gelatin zymographic analysis, FCM barely suppressed the gelatinolytic activity of secreted MMP-9. This finding suggests that inhibitory effects of FCM on cancer cell invasion may relate to the other mechanisms such as suppression of motility. Besides MMP-9, we also assessed the changes in EMT biomarkers to confirm that FCM have inhibitory effects on EMT (data not shown). Western blotting showed that FCM did not suppress the mesenchymal markers vimentin, and N-cadherin, and that the expression of E-cadherin epithelial marker was not detected in MDA-MB-231 cells (data not shown). In this study, TNF was used to clearly demonstrate the effects of FCM on cancer cell adhesion to HUVECs. Therefore, the pathophysiological relevance that TNF is usually increased in patients with advanced cancers (21) is supporting that TNF-augmented cancer cell adhesion to HUVECs shown in this study is not an artificial in vitro experiment.

In conclusion, this study demonstrated that FCM suppressed the cancer cell adhesion to HUVECs through selective suppression of VCAM-1. The inhibitory effects of FCM on VCAM-1 expression may be linked to inhibition of PKC phosphorylation. This study provides evidence that FCM may have anti-metastatic activity by inhibiting adhesion molecules and invasion on human breast cancer cells.

This study was supported by grants from the National R&D Program for Cancer Control, Ministry of Health & Welfare, Republic of Korea (0820050). 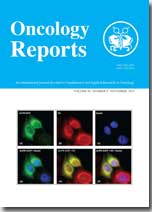