Rearrangements of chromosome arm 15q are rare but recurrent in conventional lipomas, a tumor type often showing deregulated expression of the HMGA2 gene. In order to assess whether 15q rearrangements could constitute a distinct pathogenetic mechanism, we studied seven cases of conventional lipoma that at G-banding analysis had various rearrangements of 15q12-q21. The breakpoints in 15q were mapped by fluorescence in situ hybridization (FISH) and single nucleotide polymorphism array analyses, and the status of the HMGA2 gene was evaluated by FISH and/or quantitative PCR. We found an overlapping deletion on 15q in two cases, but no recurring breakpoint among the other cases. In addition, all cases displayed rearrangement of HMGA2 at the genomic or the transcriptional level. Although 15q rearrangements sometimes are noted as the sole aberration at cytogenetic analysis of conventional lipomas, they are secondary to HMGA2 deregulation.

Conventional lipoma is a benign tumor composed of mature fat cells, most frequently occurring between the ages of 40 and 60 years (1,2). Lipomas may occur anywhere in the body, including inside bones and parenchymatous organs. The prognosis is excellent regardless of whether they are superficial or deep-seated, although intramuscular lipomas with an infiltrative growth pattern may recur locally (3). Lipomas have been extensively analyzed by chromosome banding, through which aberrations have been noted in approximately 83% of the cases (4). The most common alteration is structural rearrangement of chromosome region 12q13–15 (75% of the cases with clonal aberrations), resulting in transcriptional upregulation of the HMGA2 gene, which causes tumorigenesis. Other characteristic cytogenetic findings include deletions of 13q (15–20%), supernumerary ring chromosomes or giant marker chromosomes (6%) and rearrangements of band 6p21–23 (5%), which harbors the HMGA1 gene (5–7). In 10% of the cases, none of these characteristic aberrations is noted, suggesting that conventional lipomas sometimes develop through alternate molecular routes. One uncommon, but recurrent, cytogenetic finding is structural rearrangement of chromosome arm 15q, usually without concomitant rearrangement of 12q (5). In order to assess whether such 15q rearrangements might target genes of importance for lipomagenesis, we selected seven cases for further fluorescence in situ hybridization (FISH) and/or single nucleotide polymorphism (SNP) and gene expression array studies. Apart from mapping the breakpoints in 15q, we also assessed the status of the HMGA2 gene using FISH or quantitative real-time PCR (qRT-PCR), in order to investigate its cryptic involvement in the tumorigenesis of this group of lipomas.

Seven conventional lipomas with structural rearrangement of 15q were selected among the 550 lipomas studied at the Department of Clinical Genetics, Lund Univerity (Lund, Sweden), from 1984. Data concerning patient gender and age, tumor location and karyotype are documented in Table I. All cases were analyzed by chromosome banding after short-term culturing according to standard methods. Karyotypes were described according to ISCN (2013). All samples were obtained after informed consent, and the study was approved by the regional ethics committee of Lund University (Dnr 2011/289).

RNA of good quality was extracted from cases 1–4 and hybridized onto Affymetrix Human Gene 1.0 ST Arrays (Affymetrix, Santa Clara, CA, USA) as previously described (9). Twenty-five conventional lipomas without detectable 15q rearrangements were included as controls. Gene expression data were normalized, background-corrected and summarized by using the Robust Multichip Analysis algorithm implemented in the Expression Console version software 1.1 (Affymetrix). Gene expression levels were subsequently compared between cases and controls. All genes located in the region 24–60 Mb in 15q were evaluated using a t-test, and P-values were adjusted for multiple testing by Benjamini-Hochberg false discovery rate (FDR) correction (Qlucore Omics Explorer; Qlucore AB, Lund, Sweden). Genes with a P-value <0.05 and an FDR <0.2 were considered to be significantly altered.

FISH analyses were performed on all seven cases. To pinpoint the breakpoints in 15q, we performed a chromosome walking with bacterial artificial chromosome (BAC) probes. To assess the involvement of HMGA2, we performed a break-apart assay with the BAC probes RP11-299L9 and RP11-427K2, specific for the 5′-part and the 3′-part of the gene, respectively. Whole chromosome paint (WCP) probes were used to detect chromosomal rearrangements and, when applicable, to discriminate tumor cells from normal cells. Probes and slides were prepared and analyzed as previously described (10).

qRT-PCR was used to study the expression level of the HMGA2 gene in cases 1 and 4, which showed no rearrangement at FISH analysis. To detect differences in the expression levels of HMGA2 5′- and 3′-ends, consistent with an intragenic rearrangement, a TaqMan gene expression assay was performed using probes Hs00171569_m1 (exons 1–2), and Hs00971725_m1 (exons 4–5) as previously described (11). ACTB was used as endogenous controls. Conventional lipomas showing a t(3;12), with an HMGA2/LPP fusion, resulting in overexpressing the 5′-part of HMGA2 (control 1) and a t(5;12), resulting in overexpression of the entire HMGA2 gene (control 2), were used as additional controls. The qRT-PCR analysis was performed as previously described (11).

Results from G-banding and SNP array analyses are shown in Tables I and II, respectively. Case 1 had a deletion spanning 15q12-q21.2 as the sole cytogenetic anomaly; the same karyotype was also found in two local recurrences occurring 2 and 3 years after surgery for the primary tumor. SNP array analysis mapped the deletion at 25.572–50.200 Mb, in agreement with the FISH results (Fig. 1). No rearrangement of the HMGA2 gene was noted at FISH analysis, while qRT-PCR showed overexpression of the 5′-part (Fig. 1). The remaining six lipomas showed involvement of 15q15-q22 in translocations with different partners (Table I). Three of these were also analyzed by SNP array. Case 3 had numerous hemizygous deletions, including the region 37.940–38.104 Mb in 15q; this deletion was confirmed and better mapped by FISH at 37.892–38.104 Mb, disclosing an unbalanced t(6;15) (Fig. 1). The SNP data also revealed deletion of the 5′-part of HMGA2 and of 13q14.11-q14.3. In case 4, the SNP array analysis disclosed a deletion in 11q23.1 as the single imbalance. FISH analysis mapped the breakpoint on chromosome 15 at 47.331–47.441 Mb (15q21.1), defined by split signals for BAC probes RP11-957F19 and RP11-1097M8. While FISH analysis revealed a seemingly intact HMGA2 locus, qRT-PCR revealed overexpression of the 5′-part of the gene (Fig. 1). In case 5, SNP array analysis identified amplification of 12q, including the HMGA2 locus, and a hemizygous deletion in band 15q21.3 at 52.663–52.685 Mb. FISH revealed that the translocation breakpoint was close to the centromere of 15q. Three cases were studied only by FISH. Case 2 had a breakpoint in 15q21.1, at 47.174–47.270 Mb, defined by split signals for BAC probe RP11-578C18. In addition, this case had a deletion of the 3′-part of HMGA2. In case 6, we mapped the breakpoint in 15q to 50.425–58.884 Mb and also found that the 3′-part of the HMGA2 gene was deleted. In case 7, we mapped the breakpoint in chromosome 15 at 57.643–57.692 Mb, in the region between BAC probes RP11-1030I22 and RP11-1030O17. In addition, this case showed deletion of the 3′-part of HMGA2. Thus, we found no clustering of breakpoints in 15q, and the region 37.892–38.104 Mb in 15q was the only recurrently deleted region, detected in two cases. This aberration affected two genes, GPR176 and EIF2AK4, neither of which showed different expression levels in lipomas with a 15q rearrangement when compared to the control tumors (Fig. 2). Instead, HMGA2 was involved in all seven cases, being either partially deleted or split or cryptically deregulated.

Table showing SNP array results and the HMGA2 involvement for the studied cases.

Previous genetic analyses of conventional lipomas have identified several different molecular subgroups. The most prominent one is characterized by aberrant transcriptional upregulation of HMGA2, either of the whole gene or of its 5′-part, as a driver mutation (11). Minor subsets instead develop through upregulation of the closely related HMGA1 gene or through deletion of one or more genes in 13q; the exact pathogenetic mechanism(s) involved in the latter cases remain unidentified (5). Even when combining the results of cytogenetic and molecular genetic analyses, deregulation of these genes cannot, however, account for the development of all conventional lipomas. In the present study, we investigated the possibility of the existence of yet another pathway, involving a locus on chromosome arm 15q. Prompted by the finding of an interstitial deletion of 15q as the sole cytogenetic aberration in multiple samples from one conventional lipoma (case 1), we mapped the breakpoints in 15q in seven cases that at G-banding analysis had shown various rearrangements of this chromosome arm, but no detectable involvement of 12q14.3. Neither FISH nor SNP array data indicated a shared breakpoint, excluding that they result in a recurrent fusion gene or in transcriptional upregulation of a specific target gene. Moreover, we found concomitant rearrangement of the HMGA2 locus in all seven cases, disclosing its primary role in the tumorigenesis also of this subgroup of lipomas, and thus revealing 15q rearrangements as secondary changes. Nevertheless, local recurrences are exceedingly rare for conventional lipomas, and when they occur they often have features of a misdiagnosed atypical lipoma, such as supernumerary ring chromosomes, large size and location in the thigh (4); the lipoma of case 1 recurred twice, always with the morphology of a conventional lipoma. Thus, it can be speculated that certain 15q rearrangements, such as the large interstitial deletion in this case, could have an impact on the growth and recurrence potential of lipomas, functioning as a cooperative mutation for lipomagenesis. The only other lipoma showing a deletion overlapping with the one characterized in case 1, was case 3. The shared deleted region at 37.892–38.104 Mb was found to contain the 5′-part of GPR176, encoding a G protein-coupled receptor involved in responses to hormones, growth factors and neurotransmitters (12), and the 5′-part of the EIF2AK4, encoding a kinase that acts in response to varied cellular stresses (13). However, global gene expression analysis did not identify either of these genes as a potential target and neither has been implicated in adipocytic tumorigenesis.

Although 15q-rearrangements appear to be secondary to HMGA2 deregulation, several of the deletions on chromosome 15, as the one observed in case 1, could be of relevance for growth characteristics, increasing the risk for local recurrence in conventional lipomas.

We acknowledge the assistance with the microarray analyses from the Swegene Centre for Integrative Biology at Lund University. The present study was supported by the Swedish Cancer Society, the Swedish Research Council and the Royal Physiographic Society in Lund. 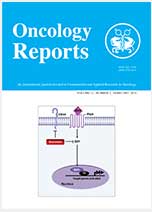