Expression of microtubule‑associated protein 1 light chain 3 (LC3) is correlated with poor prognosis in many human cancers. Hypoxia induces LC3 expression and is an essential characteristic of epithelial ovarian cancer (EOC). The aim of the present study was to elucidate the mechanism by which LC3 facilitates EOC cell migration and invasion under conditions of hypoxia. The effects of LC3B inhibition under hypoxic conditions on migration, invasion, and adhesion in HO8910PM and HO8910 EOC cell lines were investigated. LC3B inhibition was achieved by small‑interfering RNA (siRNA) targeting LC3B or by treatment with 3‑methyladenine (3‑MA). Cell migration, invasion and adhesion and the arrangement of the cytoskeleton were determined by Transwell migration assays and rhodamine phalloidin staining. Western blot analysis was performed to evaluate the expression level of LC3B and the expression and activity of ras homolog gene family member A (RhoA). Increased LC3B expression was associated with HO8910PM and HO8910 cell migration and invasion promoted under hypoxic conditions. LC3B siRNA and 3‑MA treatment each attenuated hypoxia‑induced LC3B expression, along with migration and invasion, and this was associated with a decrease in RhoA expression and disorganization of the actin cytoskeleton. LC3B may promote the migration and invasion of EOC cells by affecting the cytoskeleton via the RhoA pathway. In addition, LC3B may be a marker of tumor hypoxia and/or metastasis in EOC cells.

Epithelial ovarian cancer (EOC) is the second most common gynecologic cancer and the most common cause of mortality from gynecologic malignancies. It is highly metastatic, and most patients are diagnosed at an advanced stage (1–3). Despite recent gains in survival, most patients experience recurrence and metastasis, and the 5-year survival rate for patients with advanced-stage ovarian cancer has remained unchanged (20–30%) over the past 20 years (4,5). Multiple genetic alterations are involved in the pathogenesis of ovarian cancer, and many of the signaling pathways and proteins involved have been characterized (6).

Metastasis is a complex process involving restructuring of the extracellular matrix and resulting in tumor cell migration, invasion, and establishment at new sites (7–9). Cell migration is a key factor in the invasion and metastasis of cancers (10). In addition, hypoxia is a common characteristic of growing solid tumors such as those of ovarian cancer (11,12). Preliminary studies from our group have shown that drug resistance and metastasis are significantly enhanced in ovarian cancer cells under hypoxic conditions induced by physical or chemical methods (unpublished data).

Microtubule-associated protein 1 light chain 3 (LC3) is localized to the membrane bilayer of autophagosomes (13–16). It is converted from the cytosolic form (LC3-I) to the autophagosome membrane-associated form (LC3-II) and is degraded by lysosomal enzymes within autolysosomes during non-selective autophagy (17). LC3 was first identified as 1 of 3 light chains associated with purified microtubule-associated protein (MAP)1A and MAP1B and is considered to be involved in microtubule assembly/disassembly. It has been reported to bind to the Rab7 GTPase effector FYVE and coiled-coil domain 1 (FYCO1) to mediate microtubule plus-end-directed vesicle transport (18,19). It has also been identified as a homolog of mammalian autophagy-related protein 8 (ATG8) (20).

LC3 expression has been reported to be common in the metastasis of various types of human cancer. Lazova et al (21) reported the common expression of LC3B in malignancies, supporting emerging evidence that autophagy plays a role in cancer progression. High levels of LC3B expression were associated with proliferation, invasion and metastasis, high nuclear grade, high mitotic rate, and worse outcome. Normal melanocytes adjacent to the tumor and melanoma cells of early in situ melanomas showed little or no LC3B expression. However, in primary invasive melanoma, punctate LC3B staining was widespread in nests of florid in situ tumor cells and in 100% of invasive tumors in the dermis (21). Sato et al (22) reported that 90% of primary colorectal tumors and 100% of lymphnode and liver metastases were positive for punctate LC3 expression. Normal mucosal epithelium adjacent to the tumors was negative. Yoshioka et al (23) reported strong LC3 expression in 53% of esophageal, 58% of gastric, and 63% of colorectal cancer. Han et al (24) reported that overexpression of LC3 was associated with metastasis, poor clinical prognosis, and vasculogenic mimicry in patients with melanoma. Fujii et al (25) reported that 87% of their patients with pancreatic cancer were LC3B-positive, correlating with shorter disease-free periods and poor patient outcome.

Human HO8910PM and HO8910 EOC cell lines were obtained from the Chinese Academy of Sciences Cell Bank. The parental HO8910 cell line was established from ascites of a patient with malignant papillary serous adenocarcinoma of the ovary. HO8910PM is a highly metastatic clone obtained by limiting-dilution cloning of the HO8910 line and has been used in many studies, owing to its highly metastatic activity. Cells were grown in Roswell Park Memorial Institute (RPMI)-1640 medium (Thermo Scientific Hyclone, Logan, UT, USA) plus 10% fetal bovine serum (FBS; Gibco/Life Technologies, Carlsbad, CA, USA) at 37°C in a humidified atmosphere at normoxic conditions of 20% O2, 5% CO2 and 75% N2. Experiments were performed in 6-well culture plates at 80% cell confluence.

LC3B target-specific small-interfering RNA (siRNA) plasmid vector and a scrambled siRNA control plasmid were purchased from Shanghai GenePharma, Ltd. (Shanghai, China). The siRNA sequences used were: LC3B, sense: 5′-GCGAGU UGGUCAAGAUCAUTT-3′ and antisense: 5′-AUGAUC UUGACCAACUCGCTT-3′; negative control, sense: 5′-UUC UCCGAACGUGUCACGUTT-3′ and antisense: 5′-ACGUGA CACGUUCGGAGAATT-3′. The cells were transfected with siRNA using Lipofectamine 2000 (Invitrogen/Life Technologies) according to the manufacturer’s instructions. Cells (2×105 per well) were seeded in 6-well culture plates at 30–50% confluence. Each plate was transfected with 100 pmol plasmid containing LC3B siRNA or negative control siRNA and 5 μl Lipofectamine 2000. Transfection efficiency averaged 60–70% as measured by green fluorescent protein expression. The cells were allowed to recover in RPMI-1640 medium for 6 h after transfection. Western blotting was performed to validate the knockdown efficiency, and the cells were divided for different assays.

Hypoxic environmental conditions were achieved by culturing cells in an airtight humidified chamber with a gas mixture containing 1% O2, 5% CO2 and 94% N2. After 48 h, transfection with siRNA was performed or 3-MA was dissolved in phosphate-buffered saline, pH 7.4 (PBS) and added to the medium at a final concentration of 1.25, 2.5, or 5 mM. The flasks were exposed to hypoxic conditions or maintained in a normoxic environment for an additional 24 h, and the assays were performed.

Cell migration was assessed with a Transwell chamber system (Corning Inc., Life Sciences, Tewksbury, MA, USA). A total of 2.0×105 cells in RPMI-1640 medium were added to the upper chamber under normoxic or hypoxic conditions. RPMI-1640 medium containing 10% FBS was added to the lower chamber. Migration assays were conducted for 6 h at 37°C. The insert was then washed with 1X PBS, and the non-migrated cells were removed with a cotton swab. The cells were fixed in 4% paraformaldehyde and stained with 0.1% crystal violet. Excess staining was washed away with water. The cells were identified under a microscope, and a cell count of five different fields was performed.

Cell adhesion was assessed with Matrigel-coated 96-well plates [dry-coated with Matrigel and blocked with 1% bovine serum albumin (BSA) for 1 h]. A total of 4×104 cells were allowed to adhere to Matrigel-coated wells for 2 h at 37°C under hypoxic conditions. The wells were washed three times with PBS. A volume of 10 μl 3-(4,5-dimethylthiazol-2-yl)-2,5-diphenyltetrazolium bromide (MTT) substrate was added to each well, and incubation was continued for an additional 4 h. The number of adherent cells in each well was quantified by staining with dimethyl sulfoxide and absorbance was measured at 490 nm.

Control cells or cells subjected to LC3B knockdown were washed with PBS and blocked with 1% BSA. The cells were then incubated with rabbit polyclonal anti-LC3B antibody (1:500 dilution) at 4°C overnight. The cells were washed with PBS, incubated with AlexaFluor 488 goat anti-rabbit IgG (H+L) (1:300 dilution) for 2 h, and rhodamine phalloidin (1:1000 dilution) was added for the last 30 min. Cell nuclei were stained during the last 8 min with 20 μl 4′,6-diamidino-2-phenylindole (DAPI). Images were captured by laser confocal microscopy (Zeiss LSM 710), and image analysis was performed with ZEN microscopic image analysis software (Zeiss).

Activated RhoA in cells was detected with Rho Assay Reagent according to the manufacturer’s instructions. Activated GTP-RhoA was detected by western blotting and mouse monoclonal anti-RhoA antibody (1:1000 dilution).

The aim of the present study was to determine whether LC3B is involved in the migration and invasion of EOC cells. We hypothesized that LC3B expression is advantageous for tumor development and that inhibition of LC3B is potentially effective in the treatment or prevention of metastasis, potentially by depriving tumor cells of sources of energy. Using an in vitro Transwell migration assay, we showed that inhibition of LC3B via LC3B siRNA or 3-MA treatment decreased EOC cell migration and invasion.

Notably, the downregulation of LC3B decreased the expression of RhoA and its downstream effector ROCK1, suggesting an association between hypoxia-induced LC3B and RhoA. The cytoskeleton is important for maintaining cell shape for motility. Members of the Rho GTPase family regulate the organization and stability of F-actin including in actin cytoskeleton remodeling (membrane protrusion, cell adhesion, and motility) (18). Cell protrusion and spreading are associated with integrin-matrix interactions for surface attachment and focal adhesion function (30). RhoA regulates the formation of stress fibers and the contractile ring via the stimulation of actin polymerization and activation of myosin (18). LC3B siRNA-transfected cells showed broken and disorganized F-actin fibers, with a lack of tension and direction. This was associated with reduced cell migration and invasion. LC3B siRNA thus had an effect on actin filaments, potentially by modulating RhoA activity (Fig. 7). The specific mechanism(s) whereby LC3B affects RhoA GTPase activity and leads to changes in the cytoskeleton remains to be elucidated.

In conclusion, the present results emphasize the potential of LC3 as a marker of hypoxia and/or metastasis and demonstrate that the inhibition of LC3 may be a promising strategy for reducing metastasis of human malignant EOC cells. In vivo studies may prove useful in assessing this potential. 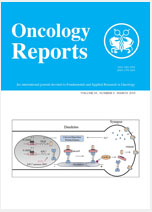