Stromal tissue regulates the development and differentiation of breast epithelial cells, with adipocytes being the main stromal cell type. The aim of the present study was to evaluate the effect of adipocyte differentiation on proliferation and migration, as well as to assess the activity of heparanase and metalloproteinase-9 (MMP-9), in normal (NMuMG) and tumoral (LM3) murine breast epithelial cells. NMuMG and LM3 cells were grown on irradiated 3T3-L1 cells (stromal support, SS) at various degrees of differentiation [preadipocytes (preA), poorly differentiated adipocytes (pDA) and mature adipocytes (MA)] and/or were incubated in the presence of conditioned medium (CM) derived from each of these three types of differentiated cells. Cells grown on a plastic support or in fresh medium served as the controls. Cell proliferation was measured with a commercial colorimetric kit, and the motility of the epithelial cells was evaluated by means of a wound-healing assay. Heparanase activity was assessed by quantifying heparin degradation, and the expression of MMP-9 was determined using Western blotting. The results indicate that cell proliferation was increased after 24 and 48 h in the NMuMG and LM3 cells grown on preA, pDA and MA SS. In the NMuMG cells cultured on SS in the presence of all three types of CM, proliferation was enhanced. LM3 cell migration was increased in the presence of all three types of CM and in cells grown on preA SS. Heparanase activity was increased in the NMuMG cells incubated with all three types of CM, and in the LM3 cells incubated with the CM from pDA and MA. Both the NMuMG and LM3 cell lines presented basal expression of MMP-9; however, a significant increase in MMP-9 expression was observed in the LM3 cells incubated with each of the three types of CM. In conclusion, adipocyte differentiation influences normal and tumoral breast epithelial cell proliferation and migration. Heparanase and MMP-9 appear to be involved in this regulation. The experimental model presented in this study is in keeping with the characteristics of the physiological environment of breast epithelial cells, in terms of both the soluble and insoluble factors present and the stromal structure per se. 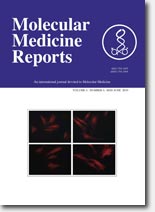