Retinoblastoma is the most common intraocular malignant solid tumor in childhood (1). Traditionally, external beam radiotherapy or enucleation was previously the mainstay of treatment, but emerging evidence of an increased risk for secondary cancers with external beam radiation has shifted our management strategies (2). Recently, systemic chemotherapy has become the primary approach to salvage eyes (3). Although chemotherapy regimens vary between institutions, cisplatin (cis-diammine dichloro platinum) is widely used for the treatment of retinoblastoma (4–6). It interacts with DNA to form DNA adducts leading to intrastrand or interstrand cross-links, which impair proper DNA replication and activate apoptotic pathways (7,8). Cisplatin treatment led to initial success in the treatment of solid neoplasms, but many patients exhibit intrinsic resistance (9). Moreover, a significant fraction of initially sensitive cancers eventually develop chemoresistance (10). Similarly, primary chemotherapy frequently fails to achieve success on eyes with advanced retinoblastoma, which finally results in enucleation (11). Thus, eyes with advanced stages are in need of more effective chemotherapy to reduce the tumor volume for local therapy, eventually saving the globes.

Clusterin is a sulfated glycoprotein of 75–80 kDa encoded by a single gene, which undergoes a maturation process finally resulting in the secreted heterodimeric form consisting of α- and β-chains (12). Clusterin has been viewed as a cytoprotective chaperone protein that is upregulated during many types of stress and exerts a putative role in the quality control of protein folding (13). Recently, we demonstrated that clusterin protects against blood-retinal barrier dysfunction in diabetic retinopathy, ischemia-induced cell death of human retinal endothelial cells (HRECs) and oxidative stress-induced apoptosis of retinal cells including retinal pigment epithelial cells, astrocytes and HRECs (14–17). Notably, these protective roles of clusterin were also proven in malignant neoplasms by demonstrating that its expression was correlated with chemoresistance and poor survival in ovarian and cervical cancer (18,19).

Three patients with unilateral group E retinoblastoma, the most extensive stage according to the International Classification of Retinoblastoma (ICRB) (11), and one patient with bilateral retinoblastoma (group B and E by ICRB) were included in this study. The patients had no evidence of metastasis and underwent enucleation of eyes with group E retinoblastoma without prior systemic chemotherapy or local treatments at 8.3±3.3 months of age. All human retinoblastoma tissue samples were obtained with informed consent and approval by the Institutional Review Board for Clinical Research at the Seoul National University Hospital complying with the tenets of the Declaration of Helsinki.

Purification of clusterin from human serum

For transfection, the Lipofectamine Plus™ reagent (Invitrogen Life Technologies) was used following the manufacturer's instructions. Briefly, 8 μl of Plus™ reagent and 5 μg of plasmid DNA (pcDNA-CLU; provided by B.H. Min) were suspended with 487 μl of RPMI-1640 medium without serum and antibiotics [RPMI(−)], and incubated for 15 min at room temperature. Lipofectamine (12 μl) was mixed with 488 μl of RPMI(−). The Lipofectamine suspension was then mixed with the Plus-pcDNA mixture, and incubated for 15 min at room temperature. The mixtures of 1 ml RPMI(−) containing 5 μg of pcDNA were added to 2.5×105 cells and incubated for 3 h at 37°C. Then, the medium was replaced with RPMI-1640 medium. The time when pcDNA was added to cells was defined as time 0. After 24 h of induction, cisplatin treatment was carried out.

Cell viability was evaluated by the 3-(4,5-dimethylthiazol-2-yl)-2,5-diphenyltetrazolium bromide (MTT) assay. SNUOT-Rb1 cells were seeded into each well of 48-well plates at a concentration of 2×104 cells/well. After incubation for 24 h, cells were treated with various concentrations of cisplatin. After incubation for the following 24 h, MTT solution was added to each well at a final concentration of 0.2 mg/ml. After incubation at 37°C for 2 h, the medium was carefully removed, and DMSO was added to solubilize the formazan produced by the viable cells. Optical density values at 540 nm were measured by a microplate spectrophotometer (Molecular Devices, Sunnyvale, CA, USA). Three independent experiments were performed for each experimental condition.

We performed 4,6-diamidino-2-phenolindole (DAPI; Sigma-Aldrich) staining for cell viability analysis. SNUOT-Rb1 cells (1×106 cells) were plated in 6-well plates and cultured for 24 h. The cells were treated with cisplatin (1 μg/ml) and/or clusterin (5 μg/ml). After 24 h of incubation, cells were fixed and stained with 10 μg/ml of DAPI (Sigma-Aldrich). After incubation for 5 min in the dark, the cells were washed and observed under a fluorescence microscope (Leica, Wetzlar, Germany).

Expression of clusterin in human retinoblastoma

To investigate the expression of clusterin in clinical samples, we performed immunohistochemical staining with an anti-clusterin antibody on tissues from enucleated human eyeballs with retinoblastoma. Microscopic examination showed that all the retinoblastoma tissues consisted of viable cells around blood vessels and zones of necrosis relatively far from the vessels. Clusterin was highly expressed in the retinoblastoma particularly at the peripheral areas of viable cells, adjacent to the necrotic zones, while barely detectable in the area with numerous Flexner-Wintersteiner rosettes marked by central lumen with surrounding cells showing cytoplasmic extensions (Fig. 1A). Counterstaining with methyl green revealed that clusterin was mainly stained in the cytoplasm.

To investigate the effect of cisplatin on retinoblastoma cell death, we performed a cell viability assay under a condition of gradually increasing concentrations of cisplatin for 24 h. As shown in Fig. 2A, at least 1 μg/ml of cisplatin was required to significantly affect the cell viability of SNUOT-Rb1 cells (P=0.001). We determined the concentration with enough chemotherapeutic activity as 1 μg/ml for further experiments.

As cisplatin is known to impair proper DNA replication and activate apoptotic pathways (7,8), apoptosis was evaluated in SNOT-Rb1 cells. After 24 h of cisplatin treatment, cleaved caspase-3 was increased (Fig. 2B). Thus, cisplatin induced the apoptotic death of retinoblastoma cells.

To evaluate the mechanism by which clusterin protects retinoblastoma cells from cisplatin-induced cell death, the inhibitory effect of clusterin on caspase-3 activity was assessed by western blot analysis. As demonstrated in Fig. 3C, increased activity of caspase-3 by cisplatin treatment was dramatically attenuated by cotreatment with 5 μg/ml of clusterin. These data suggest that exogenous clusterin inhibits apoptosis induced by cisplatin in retinoblastoma cells.

Retinoblastoma usually grows so rapidly that oxygen demands often exceed its blood supplies, which results in extensive necrosis in relatively avascular areas (21). Notably, clusterin was highly expressed in the area between viable cells around vessels and necrotic zones. We previously demonstrated the upregulation of clusterin in hypoxic condition in HRECs and astrocytes (17) and the protective role of clusterin against ischemia-induced cell death of HRECs (20). Taken together, clusterin is probably upregulated to protect retinoblastoma cells from ischemia-induced cell death.

Clusterin has been reported to be overexpressed in several types of malignant tumors, whose chemoresistance is related with clusterin expression (18,19,22). The mechanism of the enhancement of chemoresistance by clusterin is known to be associated with its inhibitory effect on apoptosis, which is consistent with our data indicating changes in cleaved caspase-3 expression induced by cisplatin treatment. Clusterin depletion by small interfering RNA was found to result in disruption of the Ku70-Bax complex, activation of Bax and translocation of Bax into mitochondria to induce cytochrome c release and apoptosis (23,24). Moreover, overexpression of clusterin increased phosphorylation of Akt and its target protein Bad, and decreased cytochrome c release and apoptosis (12). On the other hand, downregulation of Bax and enhanced activity of Akt are known mechanisms involved in the inhibition of apoptotic signals in cisplatin-resistant tumor cells (7). Taken together, clusterin overexpression may exert anti-apoptotic effects resulting in the change of cisplatin-sensitive tumor cells into cisplatin-resistant cells.

The association of clusterin and cisplatin resistance was revealed in previous studies. Transfection of the clusterin gene into human renal cell carcinoma cells enhanced their resistance to cisplatin in vitro and in vivo(25), which is consistent with our data on the effect of clusterin overexpression. The administration of clusterin-specific antisense oligonucleotides enhanced cisplatin sensitivity of KoTCC-1 human bladder tumors in vitro and in vivo(26). Based on these preclinical data, clinical studies are underway. Phase II trials of custirsen (OGX-011), a second generation antisense oligonucleotide targeting clusterin, in combination with conventional chemotherapy have been carried out in patients with chemotherapy-naive advanced non-small cell lung cancer and metastatic castration-resistant prostate cancer progressing after initial docetaxel therapy (27,28). This type of approach can be applied to retinoblastoma. Although the toxicity of the combination did not differ from what is reported for conventional chemotherapy in the study mentioned above (27), there are safety issues to consider before applying the treatment to retinoblastoma, as clusterin is reported to protect against ischemia-induced cell death of HRECs, oxidative stress-induced apoptosis of retinal pigment epithelial cells and blood-retinal barrier dysfunction in diabetic retinopathy (14–16). 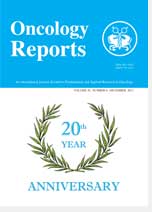