Glioblastoma is one of the most aggressive human tumors with a median survival time of 15 months. Despite considerable advances in cancer treatment in the past decades, glioblastoma remains a highly aggressive disease. Current standard treatment includes a tripartite therapy of surgical resection followed by radiation therapy combined with concurrent administration of the adjuvant DNA alkylating agent temozolomide (TMZ), which represents the most important chemotherapeutic option for glioblastoma treatment (1–3). Novel chemotherapeutic approaches utilizing loco-regional delivery or concurrent chemoradiotherapy have been shown to improve the survival of glioma patients. For instance, the combination of TMZ and radiotherapy has conferred a significant survival advantage compared with radiotherapy alone. In particular, survival benefits of TMZ have been observed in treatments for high-grade gliomas (4,5). Nevertheless, these treatment modalities provide only limited survival benefits, largely due to the frequent development of therapeutic resistance (6,7).

Increasing efforts have been made to understand the molecular basis underlying the occurrence of TMZ-resistance in glioblastoma and to identify combinatorial options to improve the therapeutic efficacy of TMZ. Although the mechanism for resistance development remains unclear, multiple combined modality treatments have been suggested to sensitize TMZ. For example, glioblastoma harboring epidermal growth factor receptor (EGFR) amplification or mutation, EGFR vIII in particular, has been found to be more sensitive to TMZ in combination with cetuximab. In addition, a signal transducer and activator of transcription 3 (STAT3) inhibitor can overcome TMZ resistance in glioblastoma by downregulating methylguanine methyltransferase (MGMT) expression (8). It has also been found that a glutathione synthesis inhibitor potentiates the impact of TMZ in glioblastoma (9). Regardless of these advances, an adjuvant therapy for TMZ treatment that benefits a broad range of glioblastoma patients is still needed.

Cell viability was measured by a 3-(4,5-dimethylthiazol-2-yl)-2,5-diphenyltetrazolium bromide (MTT) colorimetric assay (Millipore, Billerica, MA, USA) according to the manufacturer’s instructions. In brief, 5×103 cells/well were plated in 96-well tissue culture plates and grown for 24 h. Cells were then treated with TMZ, CUM alone or their combination at various concentrations. After incubation at 37°C for 72 h, 10 μl of MTT [5 mg/ml dissolved in phosphate-buffered saline (PBS)] was added to each well, and the plates were incubated at 37°C for another 4 h. Then, 100 μl of isopropanol, 0.1 ml of 0.4 N HCl, and 50 μl of dimethyl sulfoxide were added to solubilize the formazan crystals at room temperature. Within 1 h, the absorbance was measured on a plate reader at a test wavelength of 490 nm. The growth inhibitory rate was determined using the following formula: (Inhibition rate, %) = (1 − Atreated/Acontrol) × 100%. The inhibition rate was plotted and the concentration that caused 50% inhibition (IC50) was determined.

Accumulation of intracellular ROS was detected with 2′-7′-dichlorodihydrofluorescein diacetate (DCFH-DA), which crosses cell membranes and is hydrolyzed by intracellular non-specific esterases to non-fluorescent DCFH. In the presence of ROS, DCFH is oxidized to highly fluorescent DCF, which is readily detected by flow cytometry. Cells were seeded into 6-well plates at a density of 5×105 cells/well, cultured overnight, and then incubated with different concentrations of CUM and/or TMZ at 37°C for the indicated times. Before harvesting, the cells were incubated with DCFH-DA at a final concentration of 10 μM for 20 min. Cells were washed with ice-cold PBS and collected for immediate detection using flow cytometry with excitation at 188 nm and emission at 525 nm.

Cells or tumor tissues after the indicated treatment were collected and lysed. The supernatant was collected after centrifugation and cell lysates were matched for protein concentration using the Bradford assay. Samples were loaded on SDS-PAGE, transferred to nitrocellulose membranes, and blocked in 5% non-fat milk overnight, followed by an overnight incubation at 4°C with primary polyclonal antibodies to mouse PI3K, AKT, phospho-AKT (Thr308), phospho-mTOR (Ser2448), Bad, phospho-Bad (Ser112) and β-actin. All antibodies were used at a dilution of 1:1,000. Blots were subsequently washed three times with Tris-buffered saline Tween-20 (TBST) and then incubated with the appropriate horseradish peroxidase-conjugated secondary antibodies for 1 h at room temperature. After three additional TBST washes, the immunoreactive bands were visualized by enhanced chemiluminescence (Amersham Biosciences, Buckinghamshire, UK) according to the manufacturer’s instructions. The levels of β-actin were estimated to check for equal sample loading. Films were scanned and band densities were quantified with densitometric analysis using Scion Image (Epson GT-X700, Tokyo, Japan).

The mechanism of the development of TMZ resistance has been widely studied. Current insights have mainly focused on the upregulation of DNA repair capacity in human tumors, since TMZ is an alkylating agent prodrug that delivers a methyl group to purine bases of DNA (O6-guanine, N7-guanine and N3-adenine). TMZ-caused DNA lesions are considered to be the key reason to trigger apoptosis and consequently inhibit tumor growth. The primary cytotoxic lesion, O6-methylguanine (O6-MeG), can be removed by MGMT in tumors expressing this protein or tolerated in mismatch repair-deficient tumors (27). Base excision repair (BER), which removes potentially lethal N7- and N3-purine lesions, has also been suggested to contribute significantly to repair or toleration of TMZ treatment. Recently, several small molecule inhibitors of poly(ADP-ribose) polymerase-1 (PARP-1), a critical BER protein, have yielded promising results in combination with TMZ in the clinic.

In addition to understanding the mechanism underlying the resistance of TMZ, considerable efforts have been made to identify approaches to overcome this resistance. Although a broad range of pharmacologically active agents, such as inhibitors against PI3K and STAT3, have been suggested to exhibit potential as sensitizers to TMZ, most of these therapeutic options, as an adjuvant therapy to TMZ, are associated with largely enhanced toxicity. In particular, the current standard treatment already includes a tripartite therapy, where both TMZ and radiotherapy are known to cause severe adverse effects in general. The inclusion of extra therapy, particularly one with a considerable impact on vital signaling pathways, will foreseeably be challenged by drug intolerance in patients.

This study was supported by a grant from the Nanjing Medical Technology Development Project (no. YKK10072), and the Jiangsu Province Health Research Fund (no. H201235). 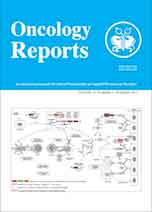