Cisplatin-based chemotherapy is the first‑line treatment for metastatic urothelial cell carcinoma. However, for cisplatin‑resistant cases, no chemotherapeutic agent has been established as a standard of treatment. This study aimed to investigate the synergistic antitumor effect of ginsenoside Rg3 on cisplatin in cisplatin‑resistant bladder cancer cells (T24R2). T24R2 cells were treated with cisplatin and/or ginsenoside Rg3. Cell viability was assessed by the Cell Counting Kit-8 and clonogenic assays. Synergism between ginsenoside Rg3 and cisplatin was determined when the combination index was <1.0. Flow cytometry was used to evaluate the cell cycle distribution. To estimate the changes of proteins associated with the cell cycle and apoptosis following the treatment of ginsenoside Rg3, western blotting and densitometric assays were performed for caspase-3, -8 and -9, cyclin B1, Bcl-2, Bad, p21 and cytochrome c. The Cell Counting Kit-8 and clonogenic assays showed the synergistic antitumor effect of ginsenoside Rg3 on cisplatin, while the combination index was <1.0, confirming the synergism. Cell cycle alterations at the G2/M phase caused by cisplatin were greater after the combination with ginsenoside Rg3. Western blotting and densitometric assay showed that the expression of Bcl-2 was decreased after the combined treatment of ginsenoside Rg3 and cisplatin, whereas the expression of cytochrome c and caspase-3 were increased, suggesting the activation of the intrinsic apoptotic pathway. In conclusion, ginsenoside Rg3 inhibited the proliferation of cisplatin‑resistant bladder cancer cells in a synergistic manner with cisplatin. Activation of the intrinsic apoptotic pathway and the enhancement of cell cycle alterations are possible explanations for this result.

Cisplatin-based chemotherapy remains the first-line treatment of metastatic urothelial or transitional cell carcinoma. However, advanced age, poor performance status and renal dysfunction often preclude it. As no standard regimen has been established for patients who relapse after first-line cisplatin-based chemotherapy, it is essential to establish an effective chemotherapy regimen for patients with cisplatin-resistant bladder cancer. Taxane-based salvage chemotherapy and novel chemotherapeutic agents may be used for patients with cisplatin-resistant diseases. Numerous agents are under investigation or being tested in clinical trials to identify a novel tolerable target agent (1). However, the outcomes thus far are unsatisfactory.

Ginseng has been used in Asia as a medicinal plant to treat various diseases. Ginsenoside is an active compound of ginseng. Ginsenoside Rg3 is a natural product isolated from Panax ginseng. It induces apoptosis in human glioblastoma cell lines (2) and has an antitumor effect on hepatocellular carcinoma cells via the intrinsic apoptotic pathway (3–5).

In the present study, we investigated the antitumor effect of ginsenoside Rg3 and its synergism with cisplatin in cisplatin-resistant bladder tumor cells.

Bladder cancer cells were plated in 96-well plates and treated with cisplatin (0–20 μg/ml) and ginsenoside Rg3 (0–50 μM) for 48 h. At the end of drug exposure, 10 μl of the Cell Counting Kit-8 solution (Dojindo Molecular Technologies, Gaithersburg, MD, USA) was added to each well containing 100 μl of medium. After 4 h of incubation, absorbance at 450 nm was measured.

The synergism between the two drugs was determined according to the combination index using CalcuSyn, version 2.1 (Biosoft, Cambridge, UK) (7). CI values of <1.0, 1.0 and >1.0 indicated synergism, additive effect and antagonism, respectively (8).

For the colony-forming assay, T24R2 cells were treated with cisplatin (5.0 μg/ml) and/or ginsenoside Rg3 (50 μM) for 48 h and maintained in a drug-free medium for an additional 2 weeks. After staining with the 0.4% crystal violet, the number of colonies >0.2 mm in diameter was counted.

Unless otherwise specified, the results are expressed as the means ± SD after a minimum of three repeated experiments. Tukey’s multiple range tests were used to assess the statistical significance. P<0.05 was considered to indicate a statistically significant result. All the analyses were conducted using IBM SPSS version 21.0 (SPSS Inc., Chicago, IL, USA).

Cisplatin exerted an antitumor effect on bladder tumor cells. The viability of HTB5, J82, JON and UMUC14 cells was decreased after cisplatin treatment in a dose-dependent manner. However, ginsenoside Rg3 did not affect cell viability at any dose, regardless of the presence of cisplatin (Fig. 1).

Cyclin B1 expression was significantly increased after the treatment with cisplatin and it was further enhanced following the combined treatment. The expression of other cyclins such as cyclin A and D1 was not identified by western blotting (data not shown). The increase of cyclin B1 after the combined treatment was correlated with the result of cell cycle alterations, suggesting the cell cycle arrest at the G2/M phase.

Cisplatin is a platinum-based DNA alkylating agent that induces DNA damage, cell cycle arrest at G2/M phase, and apoptosis (11). Cisplatin-based combination chemotherapy has been the standard treatment method of advanced bladder cancer since the late 1980s (12–15). For patients with cisplatin-resistant bladder cancer, second-line treatment remains to be determined and many drugs are under investigation or being tested in clinical trials. The results of the present study have shown that ginsenoside Rg3 inhibits the growth of T24R2 cells in a synergistic manner with cisplatin. No synergism was observed between cisplatin and ginsenoside Rg3 when other cisplatin sensitive bladder cancer cell lines were treated alone or in combination. The survival of those cells was affected by cisplatin.

There are two possible explanations for the abovementioned results. First, the result suggests that the impact of ginsenoside Rg3 was not sufficiently strong to surpass the effect of cisplatin in cisplatin-sensitive cells. By contrast, when it was combined with cisplatin, the cell cycle arrest of the G2/M phase was potentiated with ginsenoside Rg3, which may contribute to the cell cycle arrest at the G1/S phase, consolidating the cell cycle alterations. The optimum concentration at which the antitumor effect was evident was <2.0 μg/ml of cisplatin. Second, since cisplatin-resistant bladder cancer cells have an increased expression of Bcl-2 (10), the inhibition of Bcl-2 following the treatment of ginsenoside Rg3 may lead to the more potent inhibition of viability in those cells.

Although the underlying mechanism of cell cycle regulation was not examined in the present study, the change of p21, which occurred only after the combined treatment, may be important in the synergism between the two agents. The combined treatment of ginsenoside Rg3 enhanced the cell cycle arrest at the G1/S checkpoint with the induction of p21, leading to a synergistic antitumor effect. However, irrespective of whether ginsenoside Rg3 was treated alone, alterations in the cell cycle may not have been sufficiently strong to induce the antitumor effect.

Cyclin B1 is expressed predominantly during the G2/M phase of the cell cycle (18), and its increased expression is correlated with the result of flow cytometry. Chen et al have shown that ginsenoside Rg3 inhibited the proliferation of EJ cells in bladder cancer cells by inducing apoptosis (19). The proportion of the S and G2/M phase was increased, while that of the G0-G1 transition was decreased in the cell cycle analysis, which was in agreement with our results. In addition, the increase of p21 only after the combined treatment may contribute to the cell cycle alteration, resulting in synergism.

Bcl-2 protein is an integral outer mitochondrial membrane protein that blocks the apoptotic death of some cells. Our results showed that the combined treatment of ginsenoside Rg3 and cisplatin was associated with the reduced level of expression in Bcl-2. Duggan et al showed that the downregulation of Bcl-2 protein enhanced mitomycin C induced apoptotic cell death in bladder cancer (20), although the prognostic significance of those findings was not consistent in the literature (21–24). Bolenz et al also demonstrated that the addition of Bcl-2 antisense oligodeoxynucleotides enhanced the cytotoxic potential of cisplatin as well as other chemotherapeutic agents such as mitomycin C in transitional carcinoma cell lines (25). Hong et al demonstrated that the expression of Bcl-2 mRNA and protein was increased in cisplatin-resistant bladder cancer cells and treatment with antisense Bcl-2 oligonucleotide enhanced the cytotoxicity of cisplatin significantly (10). Those results may have an impact on results of this study.

In addition to the suppression of Bcl-2, western blotting showed increased activity of proteins including cytochrome c and caspase-3, which was known to be involved in the intrinsic apoptotic pathway. Jiang et al demonstrated that ginsenoside Rg3 alone or the combined treatment with chemotherapeutic agents inhibited tumor growth in hepatocellular carcinoma via the activation of an intrinsic apoptotic pathway through alterations in the expression of Bcl-2 family proteins (4), which was in concordance with our result.

Bad is a pro-apoptotic protein and known to interfere the anti-apoptotic function of Bcl-2 and Bcl-xL in mitochondria (26). The increase of Bad and the decrease of Bcl-2 with the simultaneous increase of cytochrome c after the combined treatment of ginsenoside Rg3 and cisplatin suggests that the activation of the intrinsic apoptotic pathway is involved in the underlying mechanism.

In conclusion, ginsenoside Rg3, when combined with cisplatin, synergistically inhibits the growth of cisplatin-resistant bladder cancer cells. The enhancement of cell cycle alterations and activation of the intrinsic apoptotic pathway may be a possible underlying mechanism.

This study was funded by the Research Fund at Seoul National University Bundang Hospital (grant no. 02-2013-096), and a research grant from Handok Inc. 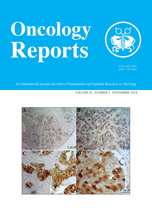