Accumulating evidence points to a causal role for advanced glycation end-products (AGEs) in the development of diabetic vascular complications, including diabetic retinopathy (DR). To assess the reciprocal correlation between AGEs and basic fibroblast growth factor (bFGF), the effects of AGEs on the production of bFGF by Müller cells were investigated. Müller cells were cultured from adult rabbit retinas. The AGEs were prepared with highly glycated bovine serum albumin (BSA) and the control non‑glycated BSA (BSA control) was incubated under the same conditions without glucose. Cultured Müller cells were exposed to AGEs or BSA control (volume percentages were 4, 8, 16, 32 and 64%) for a time course of 1, 3, 6 and 9 days in their desired medium. The expression of bFGF in Müller cells was evaluated by immunocytochemistry. Quantification was performed by densitometry using computerized image analysis with dedicated software. AGEs in a volume percentage of 16 and 32% on day 1 and in a volume percentage of 16, 32 and 64% on days 3, 6 and 9 increased the bFGF expression in Müller cells (P<0.05). Additionally, AGEs upregulated bFGF expression in Müller cells in a time‑dependent manner. In conclusion, the treatment of Müller cells with AGEs resulted in a dose- and time‑dependent elevation of bFGF in the culture medium. The results from this study suggest that the increased formation of AGEs in the vitreous may be involved in the development of DR by inducing the production of bFGF by retinal Müller cells.

Diabetic retinopathy (DR) still remains the leading cause of blindness worldwide. Consequently, there is a need for further investigation of the pathogenesis of DR to develop better more efficient therapeutic techniques. A considerable amount of evidence supports a causal role for advanced glycation end-products (AGEs) in the development of diabetic complications. AGEs have diverse biological properties, which include protein-linking, cellular activation, growth promotion and induction of vascular dysfunction (1,2). They represent an integrated measure of glucose exposure over time (3,4), increase in diabetic retinas and correlate with the onset and severity of retinopathy (5).

Müller cells, the predominant glial cells of the retina, express a diversity of ion channels and are responsive to numerous growth factors, cytokines and neurotransmitters. Molecules in the microenvironment regulate Müller cell function, structure, location, number and intercellular interactions. Müller cells themselves are sources for molecules that regulate these glia (6). It has been confirmed that these factors and cytokines are known to be involved in the pathogenesis of DR. The molecules include basic fibroblast growth factor (bFGF) (7), vascular endothelial growth factor (VEGF) (8,9), insulin-like growth factor (10), transforming growth factor-β (11), hepatocyte growth factor (HGF) (12) and pigment epithelium-derived factor (PEDF) (13). The angiogenic cytokines contribute to the regulation of endothelial cell proliferation, migration, extracellular proteolysis by matrix metalloproteinases (MMPs) and vessel wall remodeling (14).

VEGF and bFGF (15) are two of the most important pro-angiogenic cytokines and VEGF may be associated with the breakdown of this blood-retinal barrier. In contrast to VEGF, bFGF has broader biological functions in the development of intraocular neovascularization in DR (16,17). Although VEGF expression is induced by AGEs (11,18), it remains unclear whether AGEs initiate the production of bFGF by Müller cells during the early stages of DR.

In the current study, we performed specific experiments to examine the correlation between AGEs and the expression of bFGF in cultured Müller cells in vitro in order to further explore the mechanisms behind DR.

The Müller cell culture was prepared as described previously (19,20). Briefly, in phosphate-buffered saline (PBS) with 100 U/ml penicillin, 100 mg/ml streptomycin solution, the eye of an adult New Zealand white rabbit weighing 2.0–2.5 kg was cut 2 mm away from the limbus circumferentially and then the anterior segment and vitreous were removed and discarded. The retina was carefully detached and the avascular non-medullated fraction was removed in order to prevent contamination by astrocytes and oligodendrocytes. The residual retina was cut into 0.5×0.5-mm pieces under a biomicroscope and the fragments were centrifuged at 150 × g for 5 min. The tissue pieces were then gently dissociated by pipetting up and down and were planted in a 25-cm3 culture flask using Dulbecco’s minimum essential medium (DMEM) (Gibco-BRL, Grand Island, NY, USA) supplemented with 20% fetal bovine serum (FBS; SAFC, St. Louis, MO, USA), 100 U/ml penicillin, 100 mg/ml streptomycin and cultured at 37°C in a humidified incubator saturated with 5% CO2 and 95% air. Almpost all the explants adhere to the surface of the flask within 7 days. Previous immunocytochemical and electron-microscopic studies had confirmed the high purity of Müller cell cultures (19). After reaching 80–100% confluence, the cells were trypsinized and subcultured onto glass coverslips at an approximate density of 1×105/cm2 cells. Passage 1 was used for all experiments.

Bovine serum albumin (BSA) (fraction V, Sigma Chemical Co., St. Louis, MO, USA) was glycated by incubation with 0.5 M glucose at 37°C for 6–12 weeks under anaerobic and sterile conditions, as described previously (21). Control non-glycated BSA (BSA control) was incubated under the same conditions without glucose. At the end of the incubation period, samples were extensively dialyzed against PBS to remove unbound sugars. Dialyzed glycated protein was characterized based on fluorescence at 446 nm upon excitation at 360 nm using a fluorescence spectrometer (model LS-3B, Perkin-Elmer Corp., Norwalk, CT, USA). Endotoxin content in each sample was determined by the Limulus amebocyte lysate assay (E-Toxate, Sigma Chemical Co.) and was consistently found to be below detectable levels (<0.2 ng/ml).

Müller cells were separately exposed to AGEs (volume percentage was 0, 4, 8, 16, 32 and 64%) in DMEM supplemented with 10% FBS. The BSA control was used under similar conditions as the control. Samples were incubated at 37°C in a humidified incubator saturated with 5% CO2 and 95% air for 1, 3, 6 and 9 days. Conditioned medium without AGEs or BSA control was used as the blank control.

For immunocytochemical analysis, sections were coded and counted in a blind fashion by using a light microscope (Axioscop, Zeiss, Jena, Germany). A total of 6 visual fields from randomly selected areas in the sample coverslips were examined. Scopes were chosen as the percentage of angiogenic factor-positive cells that colocalized with bFGF. Immunohistochemistry staining gray scale was analyzed by Image-Pro Plus (IPP) software (version 5.0.1, Media Cybernetics Inc., Rockville, MD). The average of the results was used for statistical analysis and expressed as mean optical density (MOD).

Experiments were repeated in triplicate. All statistical analyses were performed using the SPSS® statistical package, version 11.5 (SPSS Inc., Chicago, IL) for Windows®. Standard deviation and average were calculated, expressed as the mean ± SD values. The data were analyzed for significance using one-way analysis of variance (ANOVA), followed by the Student-Newman-Keuls test for multiple comparisons. A P-value of <0.05 was considered to indicate a statistically significant difference.

A dose-dependent increase in the MOD value of bFGF was revealed following the exposure of Müller cells to AGE in a volume percentage ranging from 8 to 32%; however, the value did not change at 64%, compared with the value at 32% (P>0.05). There was a statistically significant difference between the cells treated with AGEs and those treated with the BSA control in a volume percentage of 16 and 32% (P<0.05) (Fig. 1).

The accelerated formation and accumulation of AGEs has been implicated in the pathogenesis of diabetic vascular complications. AGEs directly or indirectly induce the production of various cytokines and growth factors by macrophages, monocytes, endothelial cells and Müller cells, which leads to the development of diabetic angiopathy (22–26).

Long-lasting retinal ischemia in DR causes the outgrowth of new vessels from superficial veins and venules onto the posterior vitreous cortex. The most severe ocular complications of diabetes mellitus are associated with proliferative DR (PDR). Once neovascularization develops, DR is classified as PDR. Various reactions may be discerned in the development of PDR, including chemotaxis and cellular migration, cellular proliferation, membrane formation and contraction (7). In eyes with PDR and persistent vitreoretinal adhesions, elevated neovascular fronds may undergo fibrous change and form tight fibrovascular bands that tug on the retina and exert continued vitreous contraction. This may cause a progressive traction retinal detachment.

Müller cells extend from the inner limiting membrane of the retina to the outer limiting membrane. It has been demonstrated that Müller cells are directly involved in the formation of the blood-retinal barrier (6,27) and grow specifically into the subretinal space and form multiple layers of cell bodies between the retina and the retinal pigment epithelium after retinal detachment. Therefore, Müller cells, in association with blood-derived immune cells and factors within the vitreous, are suggested to play a crucial role in either non-proliferative DR (NPDR) or PDR (28,29).

VEGF is deemed to be a part of a pro-survival response of the hypoxic tissue with actions that include vasodilatation, endothelial cell survival, inflammation, glial cell proliferation, neuroprotection, neurogenesis and neovascularization (30,31). In proliferative vitreous retinopathy (PVR) and PDR, the vitreal and subretinal concentration of VEGF is enhanced (32–34). bFGF is involved in many biological processes in embryonic development, wound healing, hematopoiesis and angiogenesis (35) and evokes the release of VEGF and HGF from Müller cells (36). These two cytokines (VEGF and bFGF) exert a synergistic effect during the several stages of angiogenesis in the retina (37).

In this study, we demonstrated that AGEs induce bFGF secretion by Müller cells in a dose- and time-dependent manner in vitro. However, when the maximum volume percentage was reached, bFGF expression tended to decrease, since bFGF has a down-regulatory effect on Müller cells.

As an angiogenic factor in vivo, bFGF is known to be more potent than VEGF and the formation of neovascularization is augmented by the accelerated flux through the bFGF secretion (38). Based on the present findings, we propose a reciprocal correlation between AGEs and bFGF expression. AGEs elicit the augmented secretion of bFGF in Müller cells, which synergistically promotes the development of diabetic vascular complications with VEGF. AGEs may thus affect the formation of retinal neovascularization directly, as well as indirectly, by the induction of bFGF expression; this therefore may be another relevant mechanism that leads to diabetic vascular dysfunction.

One limitation of our study is that there is no standard method of preparing AGE proteins and quantifying their chemical composition in vitro. A number of widely varying methods have been used for incubating cells with BSA. The composition of the final AGE-protein is largely unknown or not specified in vivo. Therefore, we used volume percentage to describe the concentrations, after we first measured the concentrations using a fluorescence spectrometer.

In conclusion, the increased formation of AGEs in the vitreous may be involved in the initiation and progression of intraocular neovascularization in diabetes through the production of bFGF by Müller cells. The results from our study are in accord with those from other studies suggesting that early vitrectomy in DR cases by clearing the AGEs and other molecules may contribute to prevent the progression of DR (7,15,33,39). Further in vivo studies are required to explore the importance of AGEs in the initiation and progression of DR and to develop new therapeutic strategies to prevent DR.

This study was supported by the National Natural Science Foundation of China (no. 30901446) and the Programme of Chinese Medical Science of Zhejiang Province (no. 2009CB040). 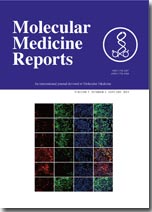