Breast cancer is the most common type of cancer among women worldwide. It is estimated that ~1.4 million women are diagnosed with breast cancer every year, and 458,000 women succumb to the disease, making it the second most frequently diagnosed type of cancer worldwide (1). The incidence of early-onset breast cancer in America is 10.3% of all new female breast cancer cases in 2012–2016 and has markedly increased among young women aged 18–45 years (2). Breast cancer involves a multi-step process associated with the abnormal expression of several oncogenes and tumor suppressor genes (3). Therefore, the study of biomarkers and active molecules in the initial stages of breast cancer can provide a theoretical basis for the prevention and early detection of breast cancer (4–7).

Cell division cycle-associated 5 (CDCA5), also known as sororin, is the encoding gene of CDCA5, which is located on chromosome 11. CDCA5 is a transcriptional protein with a molecular weight of ~27 kDa (8,9) that is widely expressed in bone marrow, testes, lymph nodes, bladder, lung, breast, stomach, and other tissues and organs (10,11). CDCA5 has been reported to promote cancer (10,12,13). The following genes have been shown to be significantly upregulated in breast cancer tissues, which lead to a decrease in the survival rates of patients: Kinetochore scaffold 1 (CASC5), cytoskeleton-associated protein 2 like (CKAP2L), family with sequence similarity 83 member D (FAM83D), kinesin family member 18B (KIF18B), kinesin family member 23 (KIF23), spindle and kinetochore-associated complex subunit 1 (SKA1), GINS complex subunit 1 (GINS1), CDCA5 and minichromosome maintenance complex component 6 (MCM6) (14). However, to the best of our knowledge, the role of CDCA5 in breast cancer has not been studied to date.

PDS5A, a sister chromatid cohesion protein PDS homolog A, is responsible for unloading auxin from chromatin, while CDCA5 (sororin) is involved in establishing sister chromatid cohesion (SCC) (15). Alterations in PDS5A expression levels have been observed in breast, kidney, esophagus, stomach, liver and colon cancer (15,16). PDS5A has been found to be significantly upregulated at both the mRNA and protein levels, and this upregulation is positively correlated with World Health Organization glioma grade (17). PDS5A is upregulated in nasopharyngeal carcinoma tumor tissue, and PDS5A overexpression in 293T cells promotes proliferation and clone formation (18).

In the present study, the effect of CDCA5 and PDS5A on breast cancer cell proliferation, migration and invasion was determined. The present findings may provide a new target and strategy for the clinical treatment of breast cancer.

STRING (https://string-db.org/) is a database that can be used to predict interactions among proteins (accession date, September 2020, version. 11.0). The differences in PDS5A expression between breast cancer and normal tissues were predicted using Encyclopaedia of RNA Interactomes website (https://starbase.sysu.edu.cn/) and Gene Expression Profiling Interactive Analysis (GEPIA) database (gepia.cancer-pku.cn/), and Pearson was used as the statistical tests.

For Cell Counting Kit-8 (CCK-8) assay, MDA-MB-231 cells (1×103 cells/well) were seeded in 96-well plates and cultured for 24 h. At 24, 48 and 72 h after incubation, CCK-8 solution (Merck KGaA) was added to each well. The cells were incubated for an additional 1 h to determine cell viability. Optical density was determined at 450 nm using a microtiter plate reader.

For colony formation assay, transfected MDA-MB-231 cells (1×105 cells/well) were seeded into 6-well plates, and the MDA-MB-231 cells treated with sh-NC or pcDNA3.1 were used as the negative controls. Following an incubation period of 14 days at 37°C, the colonies were fixed with 100% methanol for 15 min at room temperature and stained with 0.1% crystal violet at room temperature in absolute ethanol for 15 min. Visible colonies of >50 cells were counted and analyzed under an inverted light microscope.

For the wound healing assay, transfected MDA-MB-231 cells (1×105 cells/well) were cultured in 6-well plates until they reached 70–80% confluence, and then wounded using a 200-µl sterile pipette tip. Upon washing with PBS, the cells were cultured in serum-free DMEM. Images were acquired using a light microscope at each 0 and 24 h. The cell migration ratio was calculated as the percentage of remaining cell-free area compared to the area of the initially scratched area.

For the Transwell assay, MDA-MB-231 cells (3×104 cells/well) were cultured in serum-free DMEM. The upper chamber of 24-well Transwell was pre-coated with Matrigel (Merck KGaA) at 37°C for 30 min. The cells were then cultured in the upper chamber with 0.1 ml cell suspension in each well, while the lower chamber was filled with cell culture DMEM containing 20% FBS. The cells were cultured for 24 h at 37°C. Subsequently, the membrane in the lower chamber was collected and cleaned, followed by staining with 0.5% crystal violet dye (Merck KGaA) at room temperature for 10 min. The stained cells were counted using an optical microscope.

To further explore the role of CDCA5 in breast cancer, CDCA5 knockdown plasmids were constructed. The inhibition level of CDCA5 was subsequently detected by RT-qPCR and western blotting. As presented in Fig. 2A and B, CDCA5 was significantly inhibited in the shRNA-CDCA5-1/2 groups compared with the shRNA-NC group, indicating that the plasmid-mediated inhibition of CDCA5 had been successful. shRNA-CDCA5-2 showed a better knockdown than shRNA-CDCA5-1 and was selected for subsequent experiments.

CCK-8 assay was performed to detect the level of cell proliferation (Fig. 2C) and a colony formation experiment was performed to detect the colony formation potential of MDA-MB-231 cells (Fig. 2D). The results indicated that CDCA5 knockdown inhibited the proliferation of MDA-MB-231 cells. The expression of the proliferation-related proteins Ki67 and PCNA was also decreased, as shown by western blot analysis, which confirmed the aforementioned observations (Fig. 2E).

Furthermore, wound healing and Transwell assays detected a marked decrease in the migration (Fig. 3A) and invasion (Fig. 3B) of MDA-MB-231 cells. In addition, the expressions of the migration-related proteins MMP2 and MMP9 were reduced in MDA-MB-231 cells (Fig. 3C). The results indicated that CDCA5 knockdown inhibited the invasion and migration of breast cancer cells.

The overexpression of PDS5A in MDA-MB-231 cells by using a pcDNA3.1-PDS5A vector was confirmed by western blotting, which revealed that PDS5A expression was upregulated in the pcDNA3.1-PDS5A group compared with the pcDNA3.1-NC group (Fig. 5A). Furthermore, in the shRNA-CDCA5-2+pcDNA3.1-PDS5A group, CCK-8 assay revealed a marked increase in cell viability (Fig. 5B), increased levels of colony formation (Fig. 5C) and also elevated expression of the proliferation-related proteins Ki67 and PCNA (Fig. 5D), compared to shRNA-CDCA5-2+pcDNA3.1-NCgroup. The results showed that PDS5A overexpression reversed the consequences of CDCA5 inhibition on breast cancer cell proliferation.

It has been reported that the CASC5, CKAP2L, FAM83D, KIF18B, KIF23, SKA1, GINS1, CDCA5 and MCM6 genes are significantly upregulated in breast cancer tissues, and that this upregulation leads to a decrease in patient survival rate (14). CDCA5 expression was found to be higher in bladder cancer tissues compared with that in adjacent healthy tissues, and high CDCA5 expression was found to be associated with poor survival in patients with breast cancer (13,20). A previous study indicated that CDCA5 knockout in T24 and 5637 cells reduced cell proliferation and induced cell apoptosis (13). Compared with that in adjacent tissues, CDCA5 expression was upregulated in hepatocellular carcinoma (HCC) tissue and was negatively correlated with HCC patient survival (21). CDCA5 knockdown can inhibit cell proliferation and tumorigenesis, and induce cell apoptosis, suggesting that CDCA5 plays a carcinogenic role in liver cancer (22). The present study also indicated that CDCA5 was upregulated in breast cancer tissue, as queried through the GEPIA website. The present findings also demonstrated that CDCA5 was upregulated in breast cancer cells.

A previous study has indicated that PDS5A overexpression in breast cancer cells could increase the number of cells in G1 phase and enhance the activation of caspase 3, leading to tumor cell apoptosis (23). In addition, a decrease in PDS5A mRNA expression was observed in breast and kidney tumor samples compared with that in the corresponding normal tissues (24). Another study reported an increase in PDS5A mRNA expression in esophageal, stomach, liver and transverse colon tumors (25). In conclusion, these data suggested that PDS5A may be highly tissue-specific in the process of tumorigenesis and development, and that, depending on the tissue or cell type, it could inhibit the proliferation or induce the over-proliferation of tumor cells 18,226). In the present study, CDCA5 knockdown downregulated PDS5A expression in breast cancer cells, and PDS5A overexpression reversed the inhibitory effects of CDCA5 knockdown on breast cancer cell proliferation and migration.

In conclusion, CDCA5 could be a valuable oncogene, and it should be further investigated in breast cancer cell progression. However, the present study has certain limitations. Firstly, the drug sensitivity of shRNA-CDCA5-transfected cells was not analyzed. Secondly, the mRNA and protein expression levels of CDCA5 and PDS5A in breast cancer and normal tissue biopsy specimens were not analyzed. In addition, further analysis on whether CDCA5 knockdown causes the inhibition of the Akt signaling pathway in breast cancer cell lines would be helpful for confirming the accuracy of the present experimental results. Therefore, future research should focus on the aforementioned issues.

YW and JY designed the study and performed the experiments. YW, XJZ and YLZ drafted and revised the manuscript. XJZ, JL, YJ, FS and YLZ analyzed the data. JL and FS performed the literature search. JL and YW confirm the authenticity of all the raw data. All authors have read and approved the final manuscript. 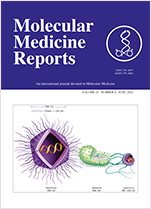