Experimental and epidemiological studies have revealed that chronic inflammation contributes to cancer progression and even predisposes to cellular transformation. Inflammatory infiltrates in papillary thyroid cancer include lymphocytes, macrophages and cytokines. High-mobility group box 1 protein (HMGB1) is a late inflammatory cytokine that signals danger to the immune system through the receptor for advanced glycation end-products (RAGE) and Toll-like receptor. The activation of the above receptors results in the secretion of growth, chemotactic and angiogenic factors that contribute to chronic inflammation. In this study, we suggest that apart from the activation of signal transduction pathways by the activation of RAGE, the indirect inhibition of cell cycle regulators [such as phosphatase and tensin homolog (PTEN)] may also cause an increase in cell growth and motility. MicroRNAs (miRNAs) have increasingly been implicated in regulating the malignant progression of cancer. MiR-221 and miR-222 have been found to be deregulated in human papillary thyroid carcinomas. They are involved in cell proliferation through the inhibition of the cell cycle regulator, p27kip1, in human papillary carcinomas. In this study, we show that HMGB1 increases the expression of miR-221 and miR-222 in primary cultures of excised papillary lesions and in an established papillary cancer cell line (BC PAP). The overexpression of oncogenic miR-221 and miR-222 caused by HMGB1 is associated with an increase in malignancy scores, namely cell growth and motility.

High-mobility group box 1 protein (HMGB1) is a pro-inflammatory cytokine that can either be passively secreted by necrotic cells or actively secreted in response to inflammatory signals. In our previous study, we showed that HMGB1 is overexpressed in thyroiditis and in papillary thyroid cancer (1). HMGB1 can be actively secreted by a variety of cells including macrophages, activated monocytes, dendritic cells, endothelial cells and certain cancer cells (2). It functions as an alarmin and its extracellular release signals damage to the immune system. HMGB1 signals through the receptor for advanced glycation end-products (RAGE) and via Toll-like receptor (TLR)2 and TLR4. The activation of these receptors results in the activation of NFκB which induces the secretion of cytokines, growth factors (3) and angiogenic factors (4). Apart from its connection to NFκB, RAGE activation is linked to many signaling pathways that upregulate protein synthesis, cell survival, proliferation and movement. In certain cases NFκB may enhance the expression of oncogenic factors, such as microRNAs (miRNAs) (5). The intracellular pathways starting from different kinases (MAPKs) (6), PI3K/AKT (7), JAK/STAT (8) that converge on AKT are positively or negatively controlled by oncogenes or tumor suppressor genes (9) which are in turn enhanced or inhibited by various factors, such as miRNAs. miRNAs are small non-coding RNAs that control gene expression at the post-transcriptional level by targeting mRNAs. They have been shown to play an important role in various processes, such as cellular development, proliferation and apoptosis (10). Their aberrant expression has been linked to several human cancers and metastasis (11). Some of them function as oncogenes or tumor suppressors (12). MiR-221 and -222 have been found to be deregulated in human papillary thyroid carcinomas (13) and are involved in thyroid cell transformation as well as cell proliferation through the inhibition of a cell cycle regulator (p27kip1) (14). A single miRNA can regulate different target genes as perfect complementarity is not required. Many miRNAs such as miR-221 and -222 form genetic clusters and therefore exert co-ordinated expression and function. In gastric cancer cells for example, the miR-221/222 cluster has been shown to target the tumor suppressor gene, phosphatase and tensin homolog (PTEN), resulting in an increase in cancer cell proliferation and radio resistance (15).

We have previously demonstrated (1,3) that inflammatory infiltrates are present in papillary cancer and may contribute to tumor transformation and escape from immune surveillance. We showed that HMGB1 is overexpressed in the papillary cancer microenvironment. In this study, we analyzed the influence of HMGB1 on the expression of the miR-221/222 cluster in a papillary cancer cell line and in primary cultures of thyreocytes obtained from patients who underwent thyroidectomy for papillary cancer.

Patients and collection of samples

Patients included in this study were selected from a group of 30 patients with papillary cancer who had undergone total thyroidectomy for a pre-operative diagnosis of thyroid cancer. All patients provided written informed consent, agreeing to participate in this study, in accordance with the ethical standards of our institution. Standard histology confirmed the diagnosis and allowed us to select 11 patients (7 females and 4 males, aged from 28 to 73 years) of which 9 were used for the preparation of primary cultures as previously described (1) and 2 female patients with papillary cancer (pT3NxMx) were selected for chemotaxis experiments.

Normal and neoplastic thyroid specimens were obtained from patients who had undergone surgical treatment at the Department of Surgery at our institution. Histological classification was carried out in accordance with the WHO recommendations. Upon removal, specimens were divided into 2 groups: in the first group, the samples were processed for routine histopathological examination and in the other group, the samples were used for establishing primary short-term cultures as previously described (1). Cells were cultured for 24 h in RPMI at 37°C, 5% CO2. Where required, 10 nM HMGB1 (Sigma) were added to the cultures. Cell viability, determined by the Trypan blue exclusion test, was always 95–98%.

The purity of the isolated monocytes was evaluated by staining with a fluorescein isothiocyanate-conjugated antibody against monocytes (FITC-conjugated anti-CD14) and analysis by flow cytometry. Viable monocytic cells (86.7+3%) (mean ± SEM) were obtained. Cells were cultured for 4 h in RPMI-1640, containing 2 mM L-glutamine, 100 U/ml penicillin, 100 mg/ml streptomycin, and 250 pg/ml Fungizone (Gibco), in the absence of antioxidant agents, at 37°C in a humified 5% CO2 atmosphere before the assay. U937, a well-established cell line derived from human monocytic leukemia was used as the positive control for western blot analysis.

Cell migration was assessed in the BC PAP cells, in primary cultures from 2 patients with papillary cancer. Specimens were obtained from nodules and healthy contralateral lobes. Monocytes from healthy donors were used as the positive controls. The cells were seeded on a 24-well migration plate (ECM 509; Chemicon International). The assay is based on the Boyden chamber principle. It provides a system for quantitative determination of cells migrating through 8-μm porous membrane towards a chemotactic agent. In our case the lower chamber was loaded with RPMI medium with or without 10 μM HMGB1 (Sigma). Incubation was carried out at 37°C, 5% CO2 for 12 h. At the end of the incubation time, migration inserts were removed from the migration chambers, placed into wells containing cell detachment solution and lysed. Samples were dyed and read with a photometric plate reader using a 480-nm filter set. Samples without cells but containing cell detachment buffer, lysis buffer and the dye were used as the blank controls for interpretation of the data.

Whole cell lysates were separated as previously described (1) on 15% SDS-polyacrylamide electroforesis gel for HMGB1 and 10% for RAGE. Samples were heat-denatured for 5 min, loaded on standard Tris-HCl polyacrylamide gel and run on ice at 40 V for the stacking gel and 80 V for the running gel. Proteins were transferred onto a PVDF membrane (Bio-Rad, Hercules), previously activated in 100% methanol for 15 sec. The membrane was blocked in TBS-T and 5% albumin for 1 h, probed overnight at 4°C by the specific antibody (monoclonal anti-HMGB1 by Sigma and monoclonal anti-RAGE (Millipore). At the end of the incubation time, the membrane was washed and incubated with anti-mouse IgG peroxidase conjugated secondary antibodies (1:10000 Sigma) for 1 h at room temperature. The signal was detected by autoradiography (Kodak Biomax light film; Sigma-Aldrich) using the chemiluminescent peroxidase substrate kit (Sigma-Aldrich) then quantified by densitometric analysis using software (Quantity-One, Bio-Rad).

Total RNA was extracted from the cells using TRIzol reagent (Life Technologies), according to the manufacturer’s instructions.

TaqMan® microRNA assays (Applied Biosystems, Foster City, CA, USA) that included RT primers and TaqMan probes were used for reverse transcription and to quantify the expression of mature miR-221 and -222 in the tissue samples and cell lines. The ubiquitously expressed U6b small nuclear RNA (snRNA) was used as the internal control. Relative quantification was calculated using the ΔCt method.

We previously (1) provided evidence that thyreocytes from papillary cancer and thyroiditis express HMGB1. We also demonstrated that the inflammatory microenvironment in thyroiditis contributes to neoplastic transformation. Therefore, we aimed to investigate whether HMGB1 can be produced by a papillary cancer cell line. Fig. 1 shows that BC PAP cells express both HMGB1 and RAGE. This suggests that HMGB1 can bind to RAGE receptors. The activation of RAGE activates the intracellular signal transduction pathways, leading to various stimulatory functions.

In order to investigate whether HMGB1 promotes growth in BC PAP cells, we performed cell growth studies by seeding 105 cells in 24-microwell plates in the presence of 10 μM HMGB1. As shown in Fig. 4, HMGB1 increased cell growth after 24 h (2-fold) and at 48 and 72 h (1.5-fold). Cell mortality increased in the controls and stimulated cells with a small but not significant difference in the 2 populations, possibly due to overcrowding in the plates resulting from the high growth rate.

Cell migration was assessed in the BC PAP cells in primary cultures from 2 patients with papillary cancer (pT3) and in cells from healthy lobes from the same patients. Monocytes from healthy donors were used as the positive controls. Fig. 5 shows that both the cell line and cells from primary cultures were more active than the monocytes in terms of movement through the membranes. This phenomenon was more pronounced in the cells obtained from the patients than in the BC PAP cells and was more evident with the addition of HMGB1, suggesting that HMGB1 attracts tumor cells.

This study reports on a way of signaling between the inflammatory microenvironment (1) of papillary thyroid cancer and the P13K/AKT/PTEN oncogenic pathway. Due to difficulty in obtaining primary cultures, most studies available on cell migration in thyroid cancer have used cell lines; however, our results obtained from primary cultures were similar to those obtained in the cell line.

We demonstrate that the binding of HMGB1 to RAGE increases the expression of miR-221 and -222 in the tumor samples and the cell line. Papillary cancer is highly differentiated and it very rarely metastasizes. However, there are some cases in which the clinical management of patients is difficult, as the tumors remain very small in size but still lead to metastases. Cell growth and motility are often evaluated as malignancy scores in many oncology studies. In this study, we show that the expression of miR-222/-221 is increased in pT3 samples, suggesting that there is a direct correlation between the degree of malignancy and oncogenic cluster expression.

The same correlation was observed between cell motility and HMGB1. This means that a higher number of cells of more malignant phenotype migrated as opposed to cytokines.

HMGB1 in cancer is associated with invasion and metastasis through the high variety of RAGE transduction pathways. These include the activation of NFκB, MAPKs, PI3K/Akt, Rho GTPases, JAK/STAT and Src family kinases. Many tumor suppressor genes such as p53 and PTEN (17) are involved in the RAGE transduction network as essential regulators of the cell cycle. PI3K generates phosphatidylinositol-3,4, 5-triphosphate (PIP3) from phosphatidylinositol 4,5-bisphosphate (PIP2), which then activates Akt. PTEN dephosphorylates PIP3 to inhibit Akt activation (18). PTEN mutations enhance Akt activity in certain cancer cells (19).

Akt activation and decreased PTEN function have been observed in liver cancer (20). A recent study on miRs showed that TGFβ activates AKT kinase through PTEN downregulation by miR-216 and -217 (21). Since PTEN is a potential target of miR-221 (22) and miR-222, it may constitute a a link between cytokine external signaling and Akt activation. Of note, miR-221 and miR-222 respond to cellular stresses, such as radiation by activating NFκB and AP1 promoters (23).

The results from the present study suggest that the abnormal expression of miR-221 and -222 promoted by HMGB1 may interfere with the PTEN regulation of the cell cycle. Further studies on PTEN inhibition by miR-221 and -222 are required to confirm this hypothesis.

The authors would like to thank Professor Hugo Bowles from Tor Vergata University of Rome for language proofreading. This study was supported by grant Ateneo 60% (2009) to Professor Alfredo Antonaci and Ateneo 60% (2011) to Dr Alessandra Zicari. 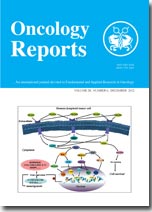