Despite the progress of multimodal therapies for non-small cell lung cancer (NSCLC) including surgery, radiotherapy, and chemotherapy, the prognosis of patients remains poor. Therefore, accurate molecular analyses are essential for the establishment of an optimal treatment modality for each NSCLC patient.

CpG islands stretch over 500–2000 bp. These regulatory elements are located within promoter regions or the first exons of genes (1). In a normal genome, most cytosines of CpG sites in CpG islands are unmethylated, while methylated in X chromosome inactivation. Gene silencing associated with aberrant methylation of tumor-suppressor genes (TSGs) is a common mechanism of tumorigenesis in NSCLC (2). Global genomic DNA hypomethylation also plays an important role in genomic instability during tumorigenesis (3). Thus, the mechanisms of both DNA hypermethylation of TSGs and global genomic hypomethylation should be elucidated in order to understand and manage NSCLC.

The methods used to measure methylation in cancer cells or tissues varies among methylation-specific PCR (MSP) (4), real-time MSP (5), direct sequencing followed by subcloning, or combined bisulfite restriction analysis (COBRA) (6). Although all are technically sound, have widespread appeal and are frequently reported in the literature (7–10), each has limitations. Since the primers used for MSP and real-time MSP are designed to detect methylation at all of the CpG sites in the binding sequence, amplicons are generated only when the CpG island being examined is completely methylated. Subcloning and COBRA procedures are labor intensive and are thus not suitable for analysis of numerous samples; the non-quantitative nature of these methods is also a drawback.

In the present study, the methylation levels of long interspersed nucleotide element 1 (LINE-1), Slit homolog 2 (SLIT2), T-cell differentiation/myelin and lymphocyte protein gene (MAL), and insulin-like growth factor binding protein 7 (IGFBP7, also named insulin-like growth factor binding protein-related protein) were assessed using sodium bisulfite conversion and a PCR pyrosequencing assay. Since these genes are known to be TSGs in various tumors, their role in tumorigenesis of NSCLC needs to be clarified. We correlated our results with clinicopathological features of the NSCLCs to learn more about how methylation profiles differ in NSCLC subtypes.

Specimens were obtained from 56 serial patients who underwent thoracic surgery at Kumamoto University Hospital from 2010 to 2012. None of these patients underwent preoperative chemotherapy, radiotherapy, or chemoradiotherapy. Informed consent for the research was obtained from each patient. The study design was approved by the ethics review board of our university.

Eight NSCLC cell lines (HCC15, H63, H157, H460, HUT15, HUT29, HUT70 and PC10) and one SCLC cell line (SBC5) were used in this study. We established several of the cell lines used (14), and others were purchased, or generously donated by Dr Adi F. Gazdar of the University of Texas Southwestern Medical Center.

The 9 tumor cell lines were incubated in culture medium with 1 μM of the demethylating agent 5-aza-CdR (Sigma-Aldrich, USA) for 6 days, with replacement of the medium on days 1, 3 and 5. Cells were harvested and RNA was extracted at day 6 as previously described (15).

A reverse transcriptase-PCR (RT-PCR) assay was used to examine mRNA expression. Total RNA was extracted from samples with TRIzol (Life Technologies, USA) following the manufacturer’s instructions. The RT reaction was performed on 4 μg of total RNA using Deoxyribonuclease I and the SuperScript II First-Strand Synthesis System with the oligo(dT) Primer System (Life Technologies), and aliquots of the reaction mixture were subsequently used for PCR amplification. Real-time RT-PCR was performed using SYBR Premix Ex Taq (Perfect Real-Time) (Takara, Japan) and Thermal Cycler Dice® Real-Time System TP850 software. The results were analyzed using the comparative Ct method (ΔΔCt) to compare the relative expression of each target gene before and after 5-aza-CdR treatment according to the user manual, and the ratio (5-aza-CdR/mRNA) was obtained. GAPDH was coamplified with target genes and served as an internal standard. Primer sequences were identical to those of the endogenous human target genes as confirmed by a BLAST search. For all RNA examined, the Gene Accession numbers are listed in parentheses. The real-time RT-PCR primer sequences used were (sequences following F, forward primer sequences; R, reverse primer sequences): SLIT2 (NM_004787.1) F, GGTGTCCTCTGTGATGAAGAG and R, GTGTTTAGGACACACACCTCG; MAL (NM_002371.2) F, GCAAGACGGCTTCACCTACAG and R, GCAGAGTG GCTATGTAGGAGAACA; IGFBP7 (NM_001553.1) F, CAC TGGTGCCCAGGTGTACT and R, TTGGATGCATGGCAC TCACA; GAPDH (NM_002046.3) F, TGAACGGGAAG CTCACTGG and R, TCCACCACCCTGTTGCTGTA. We confirmed that genomic DNA was not amplified with these primers, because all sequences cross an intron.

DNA was treated with sodium bisulfite using EpiTect Bisulfite kits according to the manufacturer’s instructions (Qiagen, USA). Subsequent PCR and pyrosequencing for each gene was performed using the PyroMark kit (Qiagen) as described previously (16). The PCR conditions were 45 cycles of 95°C for 20 sec, 50°C for 20 sec and 72°C for 20 sec, followed by 72°C for 5 min. The biotinylated PCR products were purified and denatured prior to pyrosequencing with the Pyrosequencing Vacuum Prep Tool (Qiagen) in the PyroMark Q96 MD System (Qiagen). The nucleotide dispensation orders were: LINE-1 (X58075), ACTCAGTGTGTCAGTCAGTTAGTCTG; SLIT2, GTCGTCGTTGATTAGAGTGATCTGTCG; MAL, ATGTC GTCATGATAGTCGAGTTCGTCG; IGFBP7, GTCGTCGA TGTAGTTGTCG. The amount of C relative to the sum of the amounts of C and T at each CpG site was calculated as a percentage (i.e., 0–100). The average of the relative amounts of C in the CpG sites was used as the overall methylation level of each gene in a given tumor.

The Fisher’s exact test and Mann-Whitney U test were applied to assess the association between categorical variables. Statistical significance was defined as a P-value <0.05. All P-values were two-sided. To determine the appropriate methylation cut-off value, each methylation level was subdivided into two cohorts using receiver operating characteristic (ROC) curve analysis (18). All statistical analyses were performed using SPSS 16.0 for Windows (SPSS, Inc., USA).

a Number and percentage of aberrant methylation determined by cut-off value.

b P-value obtained from paired t-test by comparing the methylation levels between tumors and matched non-malignant lung tissues.

Aberrant methylation levels and frequencies of LINE-1, SLIT2, MAL and IGFBP7 in NSCLC.

a P-value, methylation levels were compared by unpaired Student t-test.

Aberrant methylation and mRNA expression of SLIT2, MAL and IGFBP7 in the cell lines

[i] Both up and down arrows indicate that the level exceeds the normal level as determined by ROC curve analysis.

LINE-1 methylation is a good indicator of cellular 5-methylcytosine levels, and thus is correlated with the global DNA methylation level of cells or tissues. Previously, it was reported that hypomethylation of LINE-1 measured by real-time MSP was a prognostic marker in stage IA NSCLC (19). In our study, we first measured LINE-1 methylation in NSCLC using pyrosequencing, and found that LINE-1 was hypomethylated at higher frequencies in tumor tissues when compared with the frequencies in non-malignant lung tissue of NSCLCs. Although the number examined was relatively small and the prognosis was not examined, we detected significantly lower methylation levels in squamous cell carcinomas as compared to adenocarcinomas. The role of LINE-1 hypomethylation in carcinogenesis may be different between squamous cell carcinoma and adenocarcinoma.

SLIT2 suppresses tumor growth by coordinating regulation of the β-catenin and PI3K/AKT pathways. The hypermethylation of SLIT2 in NSCLC was examined by MSP (20). We also conducted similar experiments, but were not able to obtain clear results (data not shown), indicating that MSP can be influenced by conditions of the experiments, laboratory or reagents. In a previous study, SLIT2 methylation was examined by genome-wide DNA methylation analysis, using a microarray, in squamous cell carcinoma of the lung (21). Since SLIT2 is a well-known TSG and may play an important role in NSCLC tumorigenesis, we used pyrosequencing to obtain accurate and quantitative measurements of SLIT2 methylation in NSCLCs. Our results indicated that SLIT2 was hypermethylated in both tumor tissues and tumor cell lines. In addition, SLIT2 methylation levels were significantly higher in COPD cases than in non-COPD cases. We previously examined the molecular influence of COPD on the pathogenesis of NSCLC, and found that the genetic profile of COPD-related NSCLC was quite different from that of non-COPD-related NSCLC (22). Aberrant methylation of SLIT2 may also play a different role between COPD and non-COPD NSCLCs.

MAL is a T-cell differentiation protein. The MAL gene, which was initially isolated and cloned in 1987, maps to the long arm of chromosome 2, encodes a 16.7-kDa membrane protein, and contains a CpG island (23). MAL has been shown to possess tumor-suppressor capabilities by suppressing motility, invasion and tumorigenicity and by enhancing apoptosis in esophageal cancer (24). Previous studies have indicated that MAL is frequently methylated and plays a critical role in tumorigenesis of various types of tumors (25–27). However, to date there have been no studies examining MAL methylation in NSCLC. We examined methylation using pyrosequencing. Although the aberrant methylation level of the MAL gene was not high in comparison to the other genes examined here, methylation was significantly higher in tumor tissue than in non-malignant lung tissue. Moreover, the frequency of MAL methylation was significantly higher in males than in females, and both methylation level and methylation frequency were significantly higher in smokers and patients without EGFR mutations than in non-smokers and patients with EGFR mutations. Thus, the hypermethylation of MAL may play an important role in tumorigenesis of NSCLC, particularly in male smokers.

IGFBP7 is expressed in normal epithelial cells and acts as a tumor suppressor by inducing apoptosis in various types of tumors (28–30). The IGFBP7 gene is aberrantly methylated in various tumors (31,32), and methylation was previously detected in 46 out of 90 lung cancers examined by MSP (33). In our study, we evaluated the methylation level of the IGFBP7 gene in NSCLC using pyrosequencing, and detected hypermethylation in 30 out of 56 NSCLCs. The frequency of IGFBP7 hypermethylation tha was measured was quite similar to that reported by Chen et al, although the methodology and population were different (33).

In summary, through accurate measurement of methylation levels using a pyrosequencing assay, hypomethylation of LINE-1 and hypermethylation of SLIT2, MAL, and IGFBP7 were frequently detected in NSCLCs. Furthermore, these aberrant methylation profiles were accompanied by distinct clinical features. Further basic and clinical studies are required to investigate the role of aberrant methylation in NSCLC. Ultimately, further research in this area can contribute to the establishment of personalized treatment for NSCLC.

This study was supported by a Grant-in-Aid for Scientific Research from the Ministry of Education, Science, Sports, Culture and Technology of Japan (23592069), and a grant from the Smoking Research Foundation (2010–2012). 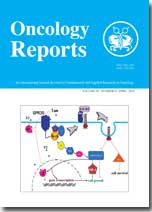