Ets-2, a transcriptional factor, has been linked to carcinoma progression but in-depth studies on its expression in human carcinoma have not been done. The present study investigated ets-2 expression in pancreatic adenocarcinoma. The ets-2 labeling index (LI) in normal pancreatic duct and pancreatic adenocarcinoma averaged 33.1±8.4 and 43.1±18.6, respectively. No statistical significance was found between the LI of normal duct and that of carcinoma with low biological aggressiveness. However, in cases with highly aggressive phenotypes such as stage IV, moderate or poor differentiation, lymph node metastasis, larger size, vascular invasion, lymphatic invasion, perineural invasion, retropancreatic invasion and capsular invasion, the ets-2 LI was significantly higher than in normal ducts and in cases with lower biological aggressiveness. Also, ets-2 transfected pancreatic carcinoma cells, when injected into athymic mice caused the formation of large tumors. These results suggest that ets-2 plays a role in the progression of pancreatic adenocarcinoma predominantly in the late phase. 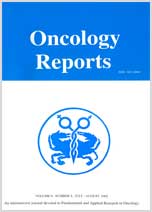