Transcription factor Slug plays an important role in the tumor invasion and metastasis of human hepatocellular carcinoma (HCC). This study aimed to explore the mechanism involved in the promotion of HCC progression by Slug. In the precent study, we demonstrated that Slug expression was significantly associated with metastasis and shorter survival time of HCC patients. Using ChIP-on-chip and microarray analysis, we identified the molecular profile of Slug downstream targets in HCC cells with Slug overexpression. The Wnt, Notch and Hedgehog pathways were identified to promote pluripotency maintaining overexpression factors sox2 and nanog. Importantly, Slug showed a close relationship with sox2 and nanog expression in HCC patients and in HCC xenografts in vivo. Notably, the DNA damaging reagent hydroxyurea had no effect on Slug, sox2 and nanog expression in HCC cells with Slug overexpression; however knockdown of Slug by the short hairpin RNA approach markedly reduced sox2 and nanog expression and inhibited HCC cell migration in vitro. The results of this study indicate that Slug promotes progression of HCC by promoting sox2 and nanog overexpression. The related molecular pathways may be used as novel therapeutic targets for HCC.

Hepatocellular carcinoma (HCC) is the most common type of liver cancer and is the third leading cause of cancer-related deaths worldwide. Understanding the molecular biology and exploring the mechanisms involved in progression of HCC may facilitate the development of new therapeutic strategies.

Recent studies have confirmed that the process of epithelial-mesenchymal transition (EMT) is an absolute requirement for tumor invasion and metastasis (1,2). EMT may be regulated by a group of transcriptional factors (3,4), and signaling pathways activated by intrinsic or extrinsic stimuli converge on these transcriptional factors and regulate the phenotypic changes of cancer cells (5). Developmental genetics research has identified many acting transcription factors that play crucial roles in embryogenesis by orchestrating EMT (6–9). In recent years, these embryonic transcription factors were found to have a close relationship with the malignant traits of cancer cells, such as motility, invasiveness, and resistance to apoptosis. Slug (SNAI2), a member of the Snail family of zinc-finger transcription factors, plays a crucial role in the regulation of EMT during embryogenesis (10,11). Researchers have found that Slug is involved in cancer cell invasion, resistance to apoptosis and stem cell features (11–15).

To date, the mechanism involved in the promotion of HCC progression by Slag is currently unknown. Therefore, in the present study, we aimed to demonstrate the critical role of Slug in HCC progression and thus provide novel therapeutic strategies for HCC.

HCC tissue specimens were obtained from 113 patients who underwent hepatectomy for HCC between 2001 and 2010 at the Tianjin Cancer Hospital, Tianjin Medical University. The diagnoses of the HCC samples were reviewed by senior pathologists. Detailed pathological and clinical data were collected.

The immunohistochemical assay was performed as previously described (17–20).

As described in our previous study (21), human liver cancer cell lines (HepG2 and SMMC7221) were obtained from the American Type Culture Collection (ATCC, USA), and the Cell Bank of the Chinese Academy of Medical Sciences (Beijing, China). Transfection of HepG2 cells was performed with Lipofectamine 2000 reagent, and the clones were selected by G418. For the expression plasmids, full-length Slug complementary DNA (cDNA) was generated by normal human embryo total cDNA, and digested with XhoI/EcoRI and subcloned into pcDNA3.1 vectors. The resulting constructs were confirmed by DNA sequencing.

For siRNA-mediated inhibition, the siRNA sequences against human Slug (5′-CAGACCCATTCTGATGTAAAG-3′) were cloned into the psiHIV-nH1 lentiviral vector system (GeneCopoeia, FulenGen Co., Ltd., Guangzhou, China). Lentiviruses were produced by transient transfection of 293T cells with the plasmids, and lentiviral supernatants were collected 48 h post transfection and centrifuged at 500 × g for 10 min to get rid of the cell debris. Following centrifugation, the supernatant was filtered through 0.45-μm polyethersulfone low protein-binding filters. Then the virus suspension diluted in complete medium with Polybrene (Sigma-Aldrich, China) at a final concentration of 8 μg/ml was used to infect the target cells.

The cells were pelleted by centrifugation and resuspended for apoptosis analysis using the FITC-Annexin V and PI detection kit (Sigma-Aldrich) according to the manufacturer’s instructions.

HepG2 and HepG2-Slug cells were cultured in a 96-well plate at a concentration of 104/100 μl. Hydroxyurea (Sigma-Aldrich) was used to induce DNA damage (final concentration, 2 mM). The cells were treated with 10% trichloroacetic acid for 5 min after 48 h, and then stained by sulforhodamine B for 30 min at 37°C. A microplate reader (BioTek, Winooski, VT, USA) was used to measure the absorbance value at 490 nm.

Male BALB/c nude mice, 5 weeks of age, were purchased from Beijing, China. Viable cells (5×106) were injected under the skin of 20 nude mice with a 26-gauge needle. The nude mice with xenografts were monitored for 28 days before sacrifice.

The microarray data has been deposited in NCBI. The following is the link (http://www.ncbi.nlm.nih.gov/projects/geo/query/acc.cgi?acc=GSE41028).

Slug expression in 113 cases of primary HCC was examined by IHC. Slug expression was identified in the cytoplasm as well as in the nucleus of the cancer cells (Fig. 1A). Cases with a percentage of positive cells ≥10% were considered as Slug-positive. Correlations between Slug expression and clinicopathological characteristics of the patients are shown in Table I. Among all factors compared, the metastasis status was significantly different between the Slug-positive group and the Slug-negative group (P=0.020). The positive rate of Slug was 46.8% in the metastasis group, higher than that of the nonmetastasis group (25.8%).

Correlation between Slug expression and clinicopathological characteristics of the patients with hepatocellular carcinoma.

Slug expression was not similarly expressed in the different HCC cell lines as detected by western blotting. We found that there was a lower level of Slug expression in the HepG2 cells compared with the SMMC-7721 cells which showed a higher level (Fig. 1C).

HepG2 cells were then transfected with Slug cDNA and showed an increased Slug protein expression (Fig. 1C). Matrigel induces cells to migrate, and this migratory behavior can be referred to as a model of tumor cell metastasis in vitro. Thus, we cultured HepG2 and HepG2-Slug cells on Matrigel in order to delineate the Slug downstream targets during HCC cell migration. On Matrigel, HepG2-Slug cells showed a more aggressive behavior by forming tubular structure, suggesting that Slug has the potential to promote cell migration in vitro.

Slug acts as a transcriptional repressor that binds to E-box motifs, and the binding site of Slug is known as E-box (5′-CANNTG-3′) (16). Next, we examined the promoters that bind to Slug using combined ChIP and Affymetrix Gene Chip (ChIP-on-chip) for HepG2-control cells in regular culture (HCR), HepG2-Slug cells in regular culture (HSR) and HepG2-Slug cells on Matrigel (HSM). The results showed that the number of gene promoters that bound to Slug only increased to 28 in the HSR vs. HCR; however, on Matrigel, the number of gene promoters that bound to Slug in HSM increased significantly and the increased promoter number reached 150 for HSM vs. HSR, and 237 for HSM vs. HCR (Fig. 2A). Our study demonstrated that the peak binding of the promoter by Slug occurred in HepG2-Slug cells on Matrigel.

Roche NimbleGen microarray analysis was employed to assess global genome expression in the HCR, HSR and HSM. Our analysis identified 2,873 genes that were differentially expressed for HSR vs. HCR; however, there were 6,023 and 8018 genes that were differentially expressed for HSM vs. HSR and HSM vs. HCR (Fig. 2B and C). The results suggest that during the process of HCC cell migration when cells were cultured on Matrigel such as HSM, Slug could bind more genes and provoked more genes to be upregulated or downregulated thus contributing to HCC progression.

By Molecule Annotation System (MAS) analysis, many pathways were identified in HSR vs. HCR, HSM vs. HSR as well as HSM vs. HCR, such as ECM-receptor interaction pathway, systemic lupus erythematosus pathway and focal adhesion pathway. Since our results showed that Slug expression contributed to HCC progression, we identified the cancer-related pathway as the major signaling pathway. Between HSR vs. HCR, the involved pathways were Wnt and Hedgehog pathways initiated by Slug downregulated genes containing E-boxes (MTL5, RRAD, NCALD and CCNA1). The downregulation of MTL5, RRAD, NCALD and CCNA1 activated genes of the Wnt and Hedgehog pathways (WNT9A, WNT6, CAMK2B, WISP1, SMO and PTCH2) (Fig. 2D).

Similarly, the Wnt, Notch and Hedgehog pathways and the VEGF pathway were identified as major pathways in HSM vs. HSR and in HSM vs. HCR (Fig. 2E and F). Furthermore, more genes were involved in HSM compared with HSR and HCR, suggesting that Wnt, Notch and Hedgehog pathway genes promoted by Slug overexpression play an important role in the process of cancer cell invasion. Importantly, the activation of the Wnt and Notch pathways promoted sox2 expression by microarray analysis and the upregulation was evident in HSM. Further western blotting validated the elevated sox2 and nanog expression present in HSM (Fig. 3). Our study suggests that the reprogramming factors sox2 and nanog contribute to tumor progression in HCC. In addition, the VEGF pathway was also activated in HSM, which may be induced by SPHK2 downregulation initiated by Slug (Fig. 2E and F).

The expression of pluripotency maintaining factors (sox2, nanog, oct4) which are involved in specification and maintenance of cancer stem cells were examined by immunohistochemistry in HCC specimen. Positive cells were indicated by the presence of brown staining in the nucleus (Fig. 4A and B). The percentage of positive cells ≥10% was considered as positive. Sox2 and Nanog were detected in 29.2 and 13.3% of hepatocellular cancer tissues; whereas there was lack of Oct4 expression in all the 113 HCC cases (Fig. 4C). Importantly, there was a significant correlation between Slug and sox2 expression (r=0.230, P=0.014) as well as Slug and nanog expression (r=0.210, P=0.026).

Although the specific role of Slug in the downregulation of E-cadherin is not completely clear, Slug is critical to induce the EMT phenotype, cancer stem-like properties and mediate radioresistance and chemoresistance (22–25). In the present study, we detected Slug expression in 113 cases of HCC tissue samples to characterize the linkage between the activation of Slug and metastasis. Statistical analysis showed that expression of Slug was correlated with metastasis and a shorter survival time in HCC patients. Therefore, our study suggests that Slug overexpression could serve as a poor prognosis marker.

ChIP-on-chip analysis showed that the greatest number of binding peaks of Slug occurred in the HepG2-Slug cells on Matrigel. We also identified the novel non-canonical pathway, Wnt and Notch pathway, leading to sox2 and nanog overexpression in vitro. Recent research showed that Sox2, Nanog and Oct4, can directly reprogram somatic cells to a pluripotent stem cell state (26–29). In our study, HCC progression may be induced through the activation of a reprogramming-like mechanism promoted by Sox2 and nanog.

Our data also showed that a correlation between expression levels of Slug and increased sox2 and nanog expression was obvious in the human HCC tissue specimens and HCC xenografts in vivo, thus indicating that Slug is sufficient to induce sox2 and nanog overexpression. Interestingly, Slug overexpression potentiated the chemoresistance properties of HepG2 cells to DNA damage reagent HU. Moreover, HU treatment could not affect EMT, the CSC phenotype and cell migration in HCC cells with Slug overexpression. Notably, our study showed that Slug silencing inhibited cell migration on Matrigel in vitro, suggesting that Slug plays a crucial role in HCC progression.

In conclusion, our findings reveal a previously unidentified role of Slug to promote HCC progression by activation of reprogramming-related genes sox2 and nanog. 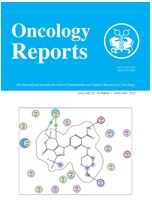