When tissues are irradiated with low linear energy transfer (LET) radiation, for example X-rays or γ-rays, DNA is primarily damaged indirectly through free radicals. The free radicals are formed when the ionizing radiation interacts with water within the cells. The free radicals that are formed are highly reactive and easily interact with and damage DNA if they form in a close proximity to the DNA itself. Indirect DNA damage contributes to approximately two thirds of ionizing events during low LET ionizing radiation (1). There are two types of free radicals, short- and long-lived radicals. Long-lived radicals are able to induce DNA lesions, for example DNA base damage, however, do not cause serious lesions, including DNA double-strand breaks. The short-lived radicals are able to induce double-strand breaks and thus are the most damaging and potentially harmful type of free radical (2). Since DNA damage in low LET radiation mainly occurs indirectly, the majority of classical radiation protectors, including dimethyl sulfoxide and WR-2721, are radical scavengers that inhibit reactive oxygen species interacting with DNA (3,4).

Natural flavonoids, such as quercetin and rutin, are known antioxidants (5). Previous studies have suggested that these flavonoids may protect cells and mice from ultra-violet radiation and ionizing radiation (6,7). These flavonoids are extremely insoluble in water, which has prevented in depth studies into their potential use as radioprotectors. In an effort to increase their water solubility, modified flavonoids have been available, and one such flavonoid is monoglucosyl-rutin (αG-rutin PS™) (8,9).

In the present study, the protective effect of monoglucosyl-rutin against radiation was investigated in mammalian Chinese hamster ovary (CHO) 10B2 cells. It was hypothesized that irradiated cells treated with monoglucosyl-rutin would have an increased survival rate when compared with the control cells, and that monoglucosyl-rutin may be a potential free radical scavenger.

To measure the cell doubling time, CHO cells were seeded at a density of 50,000 cells/P-60 cell culture dish with various concentrations of monoglucosyl-rutin, and the number of cells was counted twice a day (>8 h intervals) for 4 days. Cell doubling time for each condition was calculated using GraphPad Prism 6 software (GraphPad Software, San Diego, CA, USA). Three independent experiments were conducted.

Cell survival was measured using a standard clonogenic assay. CHO cells were seeded at a density designed to yield ~100 viable colony-forming cells/P-60 cell culture dish subsequent to treatment with a combination of monoglucosyl-rutin and ionizing radiation. The colonies were scored 7–8 days after treatment. The dishes were then treated with 100% ethanol to fix colonies and stained with 0.1% crystal violet solution. The colonies containing more than 50 cells were recorded as reproductively viable surviving cells. Cell survival curves were drawn using GraphPad Prism software with linear quadratic regression. Three independent experiments were conducted.

The fixation and staining methods used for immunocytochemistry were performed as previously described (10). For immunostaining, AG1521 fibroblast cells were cultured on chamber slides and synchronized to the G0/G1 phases by contact inhibition. Following 30 min of treatment with monoglucosyl-rutin and radiation exposure at 37°C, the cells were fixed in 4% paraformaldehyde for 15 min, washed in PBS and then treated with 0.5% Triton X-100 for a further 10 min. Non-specific binding sites were inhibited using PBS with 10% goat serum at 4°C overnight. The chamber slides were then incubated with mouse monoclonal anti-γ-H2AX antibody (Millipore, Billerica, MA, USA) for 1 h, washed three times in PBS and incubated with Alexa 488 conjugated goat anti-mouse secondary antibody (Invitrogen Life Technologies) for 1 h at 37°C. The cells were washed four times in PBS and the nuclei were stained with Antifade Gold with DAPI solution (Invitrogen Life Technologies). Images of the cells were captured using a Z-stage motorized Zeiss Axioskop with Metamorph system (Carl Zeiss AG, Jena, Germany). The z-stacked images were stored and 50 cells from these were later scored in three independent experiments.

CHO cells were synchronized into G1-phase by mitotic shake-off (11) and incubated for 2 h. Then, following treatment with monoglucosyl-rutin and radiation exposure, the cells were incubated with 10 μM BrdU for two rounds of cell replication. Colcemid was added and the cells were harvested and treated with 75 mM KCl, fixed with methanol:acetic acid (3:1) solution and placed onto slides. The slides were stained with Hoechst 33258 for 30 min, immersed in PBS and then exposed to a black light source at 55°C for 30 min. The slides were subsequently treated with 2X saline sodium citrate solution at 70°C for 30 min. Finally, the slides were stained with filtered 10% Giemsa solution in Gurr solution for 5 min. Metaphase images were obtained using an Olympus BX51 microscope equipped with a Q-imaging Aqua Cooled CCD camera with Q-capture Pro software (Olympus, Tokyo, Japan). The SCE frequency was scored for each chromosome. At least 50 metaphase cells were scored for each three independent experiments.

Statistical comparison of the mean values was performed using a t-test with GraphPad Prism 6. P<0.05 was considered to indicate a statistically significant difference. Error bars indicate the standard error of the mean.

The present study demonstrated that monoglucosyl-rutin exhibits a wide range of effects in mammalian cells. Despite the ability of monoglucosyl-rutin to protect cells from radiation at low concentrations, it was observed that at elevated doses cells experienced an increase in baseline DNA damage. These results are in accordance with previous studies demonstrating that natural flavonoids have beneficial and negative effects on cells (12). As demonstrated in a previous study, several flavonoids have been used to protect against radiation due to their ability to capture radiation-induced radicals in vitro and in vivo (7). However, it was also reported that certain flavonoids function as DNA-dependent protein kinase inhibitors (12).

The limited effect of monoglucosyl-rutin on cell survival may also be attributed to the size of the chemical, which has a molecular weight (MW) of >700 Da. Compounds with a MW of >500 Da tend to not be absorbed through the cell membrane (13,14). This may potentially explain why monoglucosyl-rutin was found to be effective at inhibiting double-strand breaks in vitro in a previous study (15), however, demonstrated no effect in vivo in the present study.

This study was partially supported by the Colorado State University start up fund (TK) and the collaborative research fund from Toyo Sugar Refining Co., Ltd. (MU). 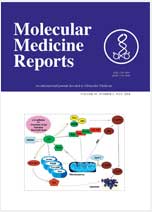